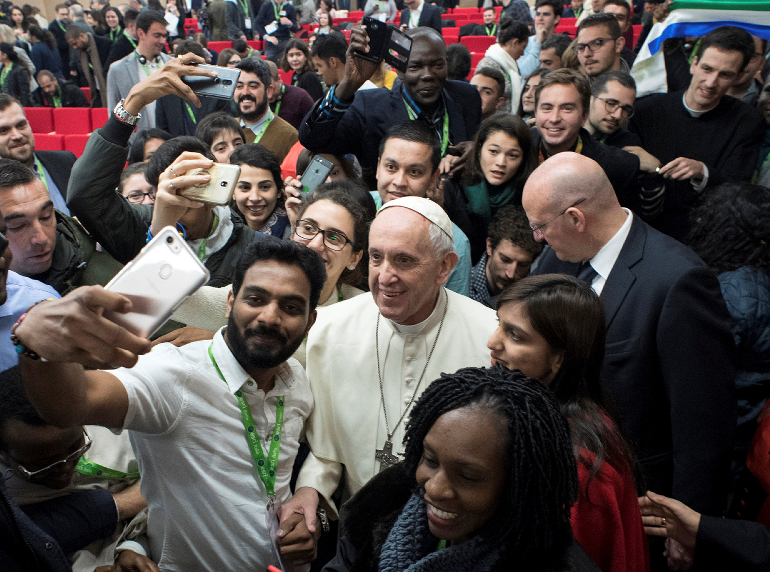 Pope Francis poses for a selfie during a pre-synod gathering of youth delegates at the Pontifical International Maria Mater Ecclesiae College in Rome in March 2018. (CNS photo/Vatican Media)

The Vatican document outlining the initial working positions for October's global meeting of Catholic bishops on the needs of young people focuses on considering how church leaders can better help the rising generation deal with unique 21st century challenges such as the part-time economy, digital dependency, and even so-called "fake news."

The document, which will guide the opening discussions of the Oct. 3-28 Synod of Bishops in Rome, also takes a notably inclusive tone towards both young Catholics who express disagreement with church teachings and young gay people.

Noting that some younger believers disagree with the church on contraception, abortion, or same-sex marriage, for example, it acknowledges that many of them also "express the desire to remain part of the Church."

Later, the document makes what appears to be the Vatican's first use of one of the preferred acronyms for the gay community, stating that "some LGBT youth ... wish to 'benefit from greater closeness' and experience greater care from the Church."

Released by the Vatican June 19 only in Italian, the new document is the preparatory working instrument for the October gathering, during which hundreds of bishops will come to Rome for discussions on the theme "Young People, the Faith and Vocational Discernment."

The working document was prepared by the Vatican's synod office following an 18-month process of soliciting input that included release of an online questionnaire, written suggestions from national bishops' conferences, and two meetings of young people in Rome.

The 32,000-word text draws extensively from the considerations of the bishops' conferences and from the second meeting of young people, a weeklong pre-synodal gathering of about 300 youth hosted by the Vatican in March.

At the end of their meeting, the youth released a document acknowledging that some in their generation want the church to change its teachings on so-called "polemical issues" and calling on the church to better include them at all levels of its global community.

The new working document, known in Latin as the Instrumentum Laboris, is divided into three lengthy parts: on recognizing the reality of young people today, on interpreting its meanings, and on choosing paths forward for the church.

The text focuses heavily on considering how young people and the church should undergo processes of discernment. Much of the second section is devoted to how church leaders can better accompany young people in diverse ways: spiritually, psychologically, in reconciliation, and "in reading the signs of the times."

The document opens by saying that taking care of young people "is not an optional work for the church, but a substantial part of its vocation and its mission in history."

It then roots its considerations in the last message released from the 1962-65 Second Vatican Council, which called on the young men and women of the world of that time to "build in enthusiasm a better world than your elders had."

In the first of many references to discernment, the text calls the process of discerning God's call as how "we recognize a way of being in the world, a style, a fundamental attitude and at the same time a way of working, a path to walk together that consists of looking at the social and cultural dynamics in which we are immersed with the gaze of a disciple."

"To walk this way, we have to be open to newness, have courage to go out, to resist the temptation to reduce the new to the already known," it continues. "A path so constructed invites us ... to ask and provoke questions without suggesting pre-constructed answers."

The document returns to the question of discernment at the opening of its second part, devoting several paragraphs to the role conscience plays in helping individuals in their decision-making.

"The role of conscience is not limited to the recognition of being in error or sin," it states. "In the awareness of personal limitations or of the situation, and of all the difficulties in orienting oneself, the conscience helps us to recognize what gift we can offer and what contribution we bring, even if maybe not fully up to the ideal."

Desire for a more 'authentic' church

In addressing the challenges facing young people in its first section, the working document notes a diverse range of issues.

It mentions "strong social and economic inequalities that ... push some young people into the arms of the mob and drug traffickers," levels of youth unemployment it calls "dramatic," and a global migratory trend that "represents an impoverishment of human capital ... in the countries of origin and a threat to sustainable development."

The document addresses so-called "fake news" in a section on the eruption of new digital technologies and social media networks, stating that young people have a "growing difficulty of distinguishing what is true."

The text mentions the church's sexual teachings in a section on "the body, affectivity and sexuality." It states: "Sociological studies demonstrate that many young Catholics do not follow the indications of the Church's sexual moral teachings."

"No bishops' conference offers solutions or recipes, but many are of the point of view that 'questions of sexuality must be discussed more openly and without prejudice,'" it continues.

"The pre-synodal document shows that the teachings of the Church on controversial questions, such as 'contraception, abortion, homosexuality, cohabitation and marriage' are sources of debate among young people, inside the church as much as outside of it," it states.

"There are young Catholics that find in the teachings of the Church a source of joy and desire 'not only that they continue to be taught despite their unpopularity, but that they be proclaimed with greater depth," it goes on. "Those that instead do not share the teachings express the desire to remain part of the Church and ask for a greater clarity about them."

The document also says that young people desire a church that is more "authentic."

"A substantial number of young people, coming mainly from very secularized areas, do not ask the Church for anything because they do not consider it a significant interlocutor for their existence," it states. "Some, on the contrary, expressly ask to be left alone, since they feel its presence as annoying and even irritating.

"This request is not born of an uncritical and impulsive contempt, but it also has its roots in serious and respectable reasons: the sexual and economic scandals, on which young people ask the Church to 'strengthen its policy of zero tolerance against sexual abuse,' " it continues.

The text notes that some young people want to see more roles for women in the church.

"Another request concerns the adoption of a style of internal and external dialogue in the Church," it states. "Young people consider it necessary to face certain difficulties of our time, such as the recognition and appreciation of the role of women in the Church and in society."

The document refers to gay people in its final section, as part of a consideration of how the church can be a "community open and welcoming towards all."

It begins that section by noting that the March pre-synodal meeting included the participation of non-Catholics, a move that it says "showed the face of a hospitable and inclusive Church able to recognize the wealth and contribution that can come from each for the good of all."

"Knowing that authentic faith cannot generate an attitude of presumption towards others, the disciples of the Lord are called to value all the seeds of goodness present in every person and in every situation," it states.

The document speaks of "LGBT youth" in a brief paragraph noting that the Vatican's Synod office received "various contributions" from young gay people during its consultative process. Its use of the acronym seems significant, as the Catholic Church has in the past formally referred to gay people as "persons with homosexual tendencies."

While Francis has eschewed that trend, using the word gay in interviews and press conferences, most recent Vatican documents have instead referred to "homosexuals."

A short preface by Cardinal Lorenzo Baldisseri, the secretary general of the Vatican's synod office, precedes the document. It concludes with a prayer for the Synod, written by Francis, which asks that God help young people respond to their call "to make real their life's project and achieve happiness."

In a Vatican press conference releasing the working document June 19, Baldisseri said the primary goal of the upcoming Synod is to "make the entire church aware of its important mission to accompany every young person, none excluded."

The cardinal also said his office decided to make the Vatican's first use of the LGBT acronym to refer to gay people because the March pre-synodal meeting of young people used the term and his office was "diligent" about respecting the young people's work.

The Vatican is yet to release the names of the bishops who will take part in the month-long Synod gathering. Traditionally, each national bishops' conference is given a set number of prelates to send, who are confirmed to participate by Francis. The pope can also name members of his own choosing.

Past synods have also involved the participation of some lay people, who serve as auditors that are able to take part in the discussions but unable to vote on the gathering's final document.

Bishop Fabio Fabene, the undersecretary of the synod office, said at the press conference that the October gathering would include a "considerable number" of young people. Fabene said his office is also developing a plan for the prelates to communicate directly with young people during the Synod through social media.

While the U.S. bishops' conference has not publicly announced who will be taking part in the 2018 Synod on their behalf, it is known they have selected at least four delegates: Galveston-Houston Cardinal Daniel DiNardo, the president of the conference; Los Angeles Archbishop José Gomez, the vice president; Philadelphia Archbishop Charles Chaput; chairman of the Committee on Laity, Marriage, Family Life and Youth; and Los Angeles Auxiliary Bishop Robert Barron.

This story appears in the Synod on the Youth 2018 feature series. View the full series.
A version of this story appeared in the July 13-26, 2018 print issue under the headline: Synod text inclusive toward youth who disagree with church.