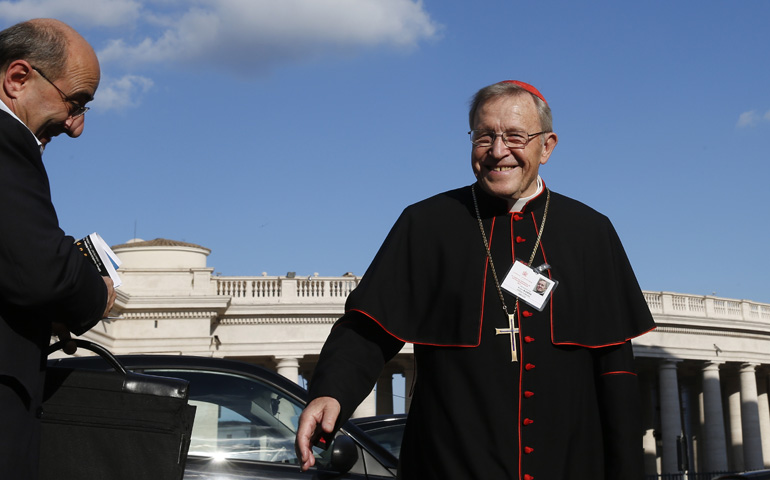 German Cardinal Walter Kasper arrives for the concluding session of the extraordinary Synod of Bishops on the family Oct. 18 at the Vatican. (CNS/Paul Haring)

Pope Francis has repeatedly said he expects his papacy to be a brief one, but Cardinal Walter Kasper is working to ensure that the pope's legacy endures long after Francis leaves the scene.

From the first days of his pontificate two years ago, Francis singled out Kasper for high praise; ever since, the retired German cardinal is frequently known as "the pope's theologian."

It's a moniker the churchman shrugs off with a smile, yet it's also a label he's doing nothing to shake, especially in light of Kasper's most recent book, published last month -- a short work that basically describes Francis as a theologian in his own right whose pastoral approach is setting Catholicism on a new course.

The title of the book, from the U.S. Catholic publishing house Paulist Press, says it all: Pope Francis' Revolution of Tenderness and Love.

But the title also sums up the two-pronged challenge for those, like Kasper, who hope that Francis' papacy represents lasting change.

First, revolutions can prompt a backlash, and Francis (and Kasper, as the pope's ally) is already facing powerful and growing opposition from church traditionalists in Rome and around the world.

Secondly, concepts like "love" and "tenderness" and "mercy" are at the heart of the sweeping pastoral reform that Francis is pushing yet can be hard to translate into policies that go beyond a particular person, even if that person is the pope.

"I wanted to make clear, in order to help Pope Francis, to make him better understood to theologians and more academic people, and to interpret some of his good visions -- to say that he is fully in the Catholic tradition, in tradition with his predecessors, and much more with [Pope Emeritus] Benedict XVI than it seems," Kasper said during an interview in his book-lined apartment across the street from the Vatican.

"Because there is also a strong conservative wing here which does not see that there is a tradition [in Francis' papacy] that goes back not only to the New Testament but to Thomas Aquinas and many others."

In the Roman Catholic church, tradition is a powerful current with the ability to carry a new approach forward, or wash it away. What's usually needed in order to safely navigate that stream is a sturdy theological framework that becomes part of the church's intellectual infrastructure.

Providing that kind of framework is especially important for the success of a papacy like Francis', which seems to be characterized by an "ad hoc" style of ministry focused on gestures and stylistic changes, such as living simply and promoting humility, denouncing clericalism and privilege, and reaching out to the margins of society rather than operating a command-and-control structure from a Roman redoubt.

It's a populist reputation that Francis himself cultivates, as he regularly dismisses theologizing as an academic parlor game that has little relation to what the church should be doing. "Reality is greater than ideas," as he likes to say.

But Kasper takes pains to show that there is a method to Francis' ministry, carefully tracing the varied intellectual and theological influences on this pope. "If some turn the pope into some kind of rock star, so others regard him as a theological lightweight. Pope Francis is neither the one nor the other," Kasper writes.

So what is he then?

"He does not speak as a theologian, but there is a 'theology of the people' and of mercy and of many other things" behind what Francis says and does, Kasper said.

At 82, Kasper is busier than ever. He had a long career as a bishop in Germany and then in Rome overseeing the Vatican's Christian unity office. As a respected theologian, he often sparred with Joseph Ratzinger, another more conservative German prelate who went on to become Benedict XVI.

When Benedict retired in 2013, it paved the way for the surprising election of the Argentine Cardinal Jorge Bergoglio as Francis -- and the re-emergence of Kasper as the standard-bearer of a more progressive Catholic theology.

A year ago, Francis tapped Kasper to address the entire College of Cardinals, setting the stage for ongoing debates about changing pastoral practices to accommodate divorced and remarried Catholics, for example, or to better welcome gay people and unmarried couples living together.

Those debates are increasingly contentious, with charges of skullduggery and backroom manipulations, bad faith and defective theology.

Kasper remains at the center of the storm. Before his apartment interview, he had spent hours in meetings with the pope and more than 150 other cardinals on reforming the Roman Curia before returning home to answer emails and phone calls and then heading off to a reception at the German embassy.

In between his appointments, he is still finding time to lecture and write ahead of round two of the Synod of Bishops on the family, where many observers expect a showdown between pro-reform forces and conservatives that could determine the fate of the "Francis effect."

Kasper himself has said that "a battle is going on," and this book is clearly something of a campaign tract, one of several books presenting competing interpretations of church history and doctrine on topics being argued at the synod.

To be sure, theological foundations are one thing, but church politics are also important in ensuring a pope's legacy. That's what happened in the Second Vatican Council in the 1960s that succeeded in passing reforms that St. John XXIII launched though he died too soon to see them implemented.

Kasper sees Vatican II as a model for what he hopes will happen this fall and beyond. In an effort to claim the center, he casts Francis as neither right nor left, neither conservative nor liberal, but a radical who goes back to the root, or "radix" in Latin, of the faith. That is, Kasper writes, "no retreat into yesterday or the day before yesterday; rather, it is power for a bold emergence into tomorrow."

That formulation is not likely to convince those who embrace "a kind of ideology that everything is infallible," as he put it.

So, he said, Francis "must now make some changes that are visible. With the Synod, the great majority of people are expecting some changes in pastoral practices."

Will he? "He's a strong man, he has a strong will. I think he will succeed."

That may be as much of a hope as a prediction. In the book, Kasper includes an epilogue that expands on the prospects for Francis' papacy, and the cardinal is more nuanced, even uncertain about whether the pope's "storm of love," as he has called it, will indeed transform the Catholic church. Or "will his pontificate remain only a brief interlude in the church's history?"

No one can say for sure, Kasper writes. It depends not on the pope, he concludes, but on Catholics themselves -- the strength of their faith and their willingness to move beyond their present divisions and categories:

"The challenge of this pontificate is far more radical than most suspect. It is a challenge for conservatives, who don't want to let themselves be surprised any more by God and who resist reforms, just as it is for progressives, who expect feasible, concrete solutions right here and now.

"The revolution of tenderness and love and the mysticism of open eyes could disappoint both groups and in the end, nevertheless, receive its due."