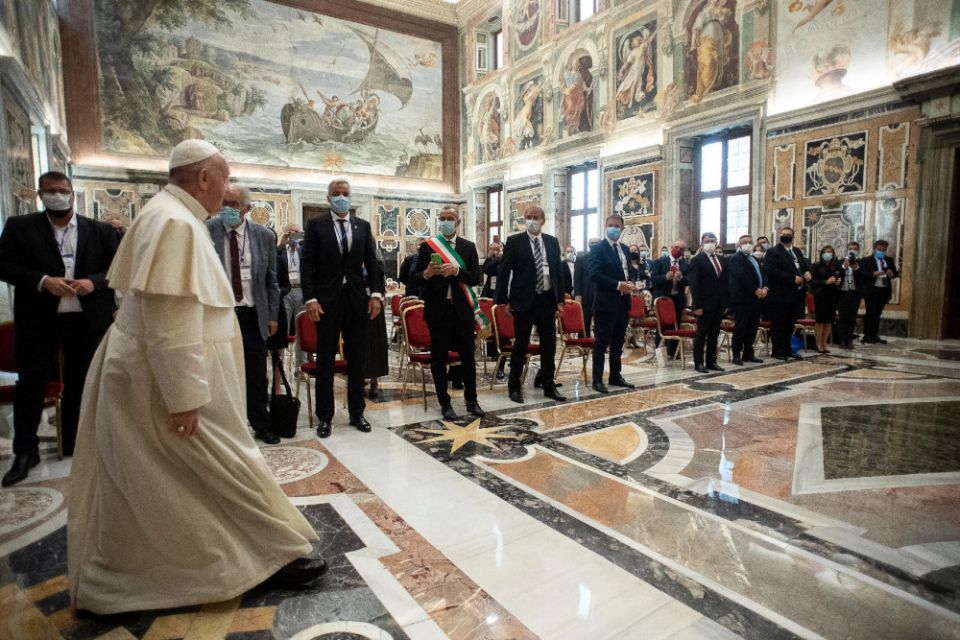 Pope Francis arrives in the Clementine Hall of the Apostolic Palace at the Vatican Sept. 10, 2020, for a meeting with members of Snapshots from the Borders, a three-year project co-funded by the European Union that studies migration flows in Europe in order "to promote more effective policy coherence at all levels." (CNS/Vatican Media)

Vatican City — European countries can turn the migration crisis into a "window" of opportunity, dialogue and encounter between migrants and their citizens, Pope Francis said.

"No one can remain indifferent to the human tragedies that continue to occur in different regions of the world. Among these, we are often challenged by those that have as their theater the Mediterranean, a border sea that is also, however, a sea of encounter among cultures," the pope said Sept. 10 during a meeting with members of Snapshots from the Borders.

According to its website, Snapshots from the Borders is a three-year project co-funded by the European Union. Its goal is "to improve the critical understanding of European, national and local decision makers and of public opinion" about the flow of migrants in Europe "to promote more effective policy coherence at all levels."

Welcoming the group to the Vatican, the pope praised the project, which allows European societies "to give a more human and coordinated response to the challenges of contemporary migration."

The current migration crisis, he said, is "complex and often has dramatic implications" that "challenge everyone."

While the international community "has been content with military interventions" to respond to regional tensions, he said, it should instead build "institutions that can guarantee equal opportunities and enable citizens to assume their responsibility for the common good."

"In front of these challenges, it seems clear that concrete solidarity and shared responsibility, both at a national and international level, are indispensable," the pope said. "We must act together, not alone."

Francis emphasized the need to "change the way we see and talk about migration" and pave the way "toward a new humanism" not only "as a philosophy of life, but also as a spirituality and a style of behavior."

"Borders, which always have been considered barriers of division, can instead become 'windows,' spaces of mutual knowledge, of mutual enrichment, of communion in diversity," the pope said.