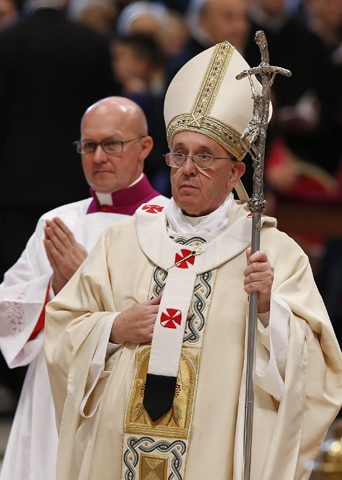 Pope Francis walks in procession as he leaves Mass Monday on the feast of the Epiphany in St. Peter's Basilica at the Vatican. At left is U.S. Msgr. Peter Wells, a high-ranking official at the Vatican Secretariat of State. (CNS/Paul Haring)

No doubt about it, Pope Francis is generating the kind of Internet buzz and sky-high Q Scores that brand managers can only dream of. But is the pontiff becoming a victim of his own good press?

The Vatican once again had to dispel media reports that went well beyond what Francis actually said, as his spokesman formally denied that the pope had signaled an openness to same-sex unions in a recently published conversation with leaders of religious orders.

During the November discussion with leaders of the Jesuits, Franciscans and others, Francis said they needed to engage "complex" situations of modern life, such as the prevalence of broken homes and the growth in gay couples rearing children.

He noted in particular the case "of a very sad little girl" he knew of who confessed that her mother's girlfriend "doesn't like me." After citing the example of that lesbian couple he seemed to warn against being quick to condemn: "How can we proclaim Christ to a generation that is changing? We must be careful not to administer a vaccine against faith to them."

And that was quickly interpreted as a papal blessing of sorts of gay families.

The Vatican's chief spokesman, Jesuit Fr. Federico Lombardi, on Monday issued a statement saying while Francis certainly wants to "affectionately accompany" people no matter their circumstances, the pontiff had "absolutely not expressed" his opinion on gay unions and that some reports had "forced" such an interpretation.

On Tuesday, another Jesuit and papal confidante, Fr. Antonio Spadaro, wrote to a leading Italian daily to protest that Francis has no intention of "legitimizing any behavior that's inconsistent with the doctrine of the church." Spadaro said any other reading was an effort at "manipulation."

Still, it's not the first time this has happened, and it probably won't be the last. Consider:

Indeed, the exaggerations have become so commonplace that a parody blog post last month claimed Francis had convened a Third Vatican Council (there have been only two) to declare that "all religions are true," there is no hell and there's nothing wrong with supporting abortion rights. What's more, the piece went so viral so fast that Catholic blogs and even the myth-busting website Snopes.com rushed out disclaimers.

So why all these overbaked reports? There are several reasons:

One: The media and the public, especially in Italy, are always hungry for something new and surprising, especially when it comes to a tradition-bound institution such as the Vatican. Just think of the 2010 hubbub over Pope Benedict XVI's remarks that seemed to indicate condoms could be OK if used to prevent the spread of AIDS.

Two: Francis is actually doing a lot of new and newsworthy things, like driving his own car -- a used one at that -- and cold-calling strangers and upending all manner of sacred papal customs. He also keeps insisting that the church needs a "new balance" in its approach that emphasizes the poor and suffering rather than just fights over abortion and gay rights.

Three: Because of those novelties, many liberals are ecstatic and expecting more, while many conservatives are picking up on any stray signal and hyping it to show that Francis is in fact a danger to their traditional agenda and must be opposed. As Spadaro wrote in his article, the exaggerated claims about Francis come "from his 'detractors' on the right, as well as those who exalt him in order to take advantage of him on the left."

Four: From the start of his pontificate in March, Francis has said he wants a church that "runs the risk of an accident," as he put it. In July in Brazil he encouraged millions of young people to go out and "make a mess." So he's not one to lose sleep over what people say about him. He'll just keep talking.

Five: Francis is a Jesuit and a pastor, accustomed to engaging people and dealing with the ambiguities of life, and he likes to talk about that. Most churchmen tend to be theologians and canon lawyers who deploy the kind of clear-cut, "abstract" concepts that Francis disdains. But such concepts don't lend themselves to misinterpretation so easily.

Finally: Francis has focused so relentlessly on the mercy of God rather than the judgment of the church that the shift in tone and emphasis has led many -- like Scalfari -- to think that perhaps anything goes under this pope.

But in a follow-up column this week to his earlier piece, Scalfari himself repented of his claim that Francis had abolished sin and instead focused on the pope's message of mercy despite sin.

So maybe, after nearly a year of both genuine changes and overblown expectations, perceptions of Pope Francis are actually catching up to reality.