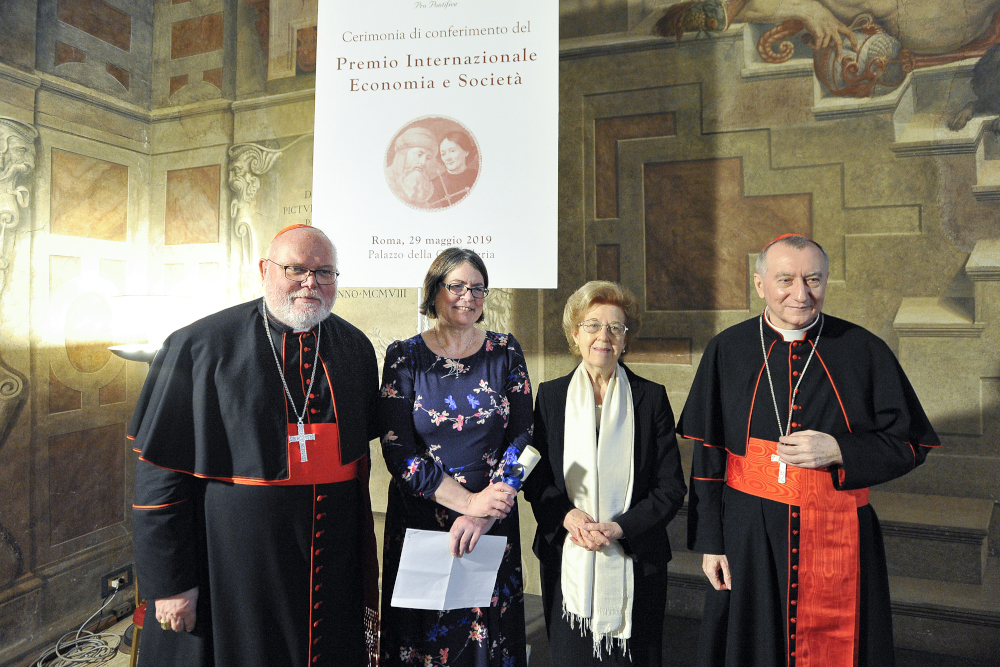 Cardinals Reinhard Marx of Munich and Freising, and Pietro Parolin, Vatican secretary of state, pose with Mary Hirschfeld, professor of economics and theology at Villanova University in Pennsylvania, and Anna Maria Tarantola, chair of the Centesimus Annus pro Pontifice Foundation board, following an award ceremony at the Vatican May 29, 2019. Hirschfeld was awarded the foundation's "Economy and Society" international prize for her book, "Aquinas and the Market: Toward a Humane Economy" during the ceremony. (CNS/Studio Catino Foto)

Two top cardinals praised a U.S. professor from Villanova University in Pennsylvania for her work fostering dialogue between the fields of economics and theology.

Cardinal Pietro Parolin, Vatican secretary of state, and Cardinal Reinhard Marx of Munich and Freising, thanked Mary Hirschfeld for her work during an award ceremony May 29. The Centesimus Annus Pro Pontifice Foundation awarded its "Economy and Society" international prize to Hirschfeld for her book, "Aquinas and the Market: Toward a Humane Economy."

The foundation, in a press release announcing the award, said Hirschfeld's innovative approach offered economists "a broader view" of what constitutes a good life, "giving a critical accent to the ethical deficiencies of modern capitalism."

At the awards ceremony, Parolin thanked Hirschfeld for her choice of topic, "which is of great importance for the church's social doctrine and for building a more human economy." While theology and social doctrine often draw upon St. Aquinas' teachings, modern economics often does not, he added.

Marx, chairman of the jury conferring the award, said in his speech that Hirschfeld's book "constitutes a true dialogue between theology and economics."

"This dialogue is often very difficult," the cardinal said. "Sometimes, theologians are so influenced by the economic mentality that they are not able to recognize the originality of the Christian point of view. Other times, they elaborate theses that are so vague that they have no real relevance for the economy. Still other times, they are so idealistic that the economists aren't able to take them seriously."

"To overcome all these dilemmas, Hirschfeld recommends the study of St. Thomas Aquinas as a favorable starting point for the dialogue between theology and economics," he said.

The author shows that the real problem humanity must grapple with is not so much "knowing how to efficiently reach that which is desired, but rather learn to desire that which is truly desirable," Marx said.

The question, "How much is enough?" is generally determined by society and formed "by nebulous social forces," so "we need not simply take them as given. We have to discern ourselves in a critical way between what genuinely serves a good human life and what does not," he said.

Hirschfeld's book, he said, can help those "living in a society where money seems to govern all things to pose certain questions about the sense of our life and our own relationship with the goods of this world. To find the just answer to these questions is one of the conditions for a truly human life."

Hirschfeld, who earned her doctorate in economics at Harvard University, said in her speech that she believed "the best path to promoting happiness lay in economic development, seeking policies and institutions that would spread material prosperity to all."

"Yet in my own life, I had found that my own prosperity did little to help me find meaning or happiness. I was hungry for something, but I did not know what I was hungry for," said Hirschfeld, an associate professor of economics and theology at Villanova University.

Out of that struggle, she said she "somehow stumbled into the church" and found "what my soul had been hungering for all those years."

The "infinite good" she longed for wasn't going to be found "in the accumulation of finite goods," money or prestige, she said. "Instead, I found that my true hunger was for God."

Aquinas looks at this kind of happiness and can help inform "how we understand the role of material wealth in a good human life," which includes "the higher goods of God, family, community and virtue," she said.

"In such a world, wealth is good, but it is an instrumental good," Hirschfeld said. "That was the root of the vision of a humane economy I lay out in my book."

The Centesimus Annus Foundation's "Economy and Society" prize is awarded every two years to a work that makes an original, in-depth study and implementation of the social doctrine of the church while also being of "proven doctrinal soundness, exceptional quality and is accessible to the general public," the foundation said in its press release.