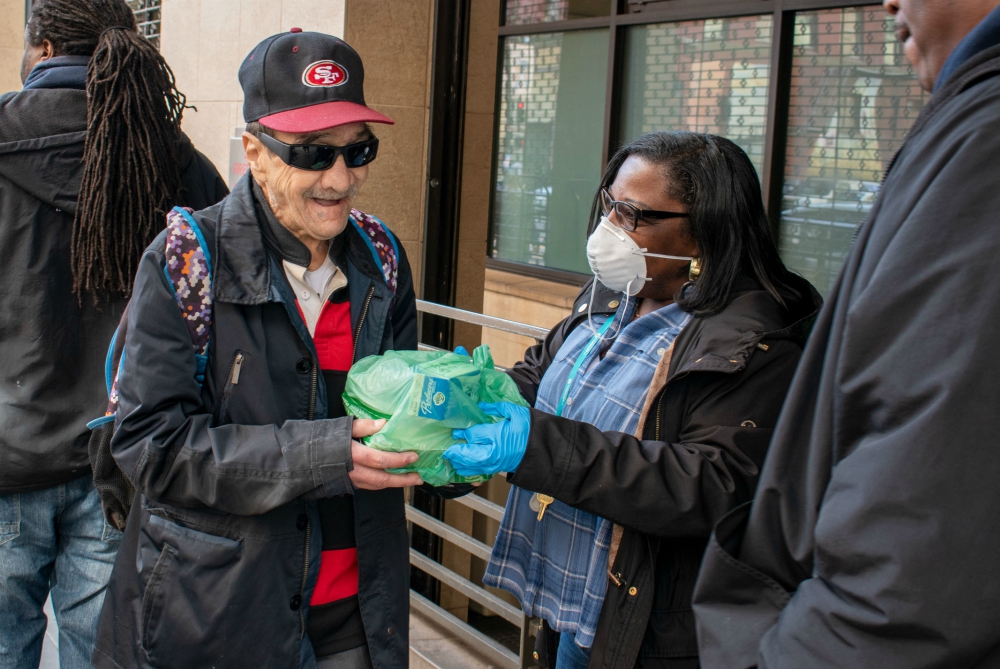 Volunteers hand out meals to homeless people in the community at St. Anthony's in San Francisco's Tenderloin district. (Provided photo)

In a new world of social distancing and self-quarantine, people who are homeless are finding themselves in a vulnerable position.

Catholic shelters and services for the homeless are currently grappling with the fast-changing situation across the country. They have been forced to scale back operations and make modifications to their existing programs.

The winter shelter run by St. Anthony's in San Francisco's Tenderloin district, which usually shuts by the end of March, has been extended through April 7. "This aligns with the mayor's shelter in place ordinance. So we can wait and see what's going to happen and at least provide some support for our 50 winter shelter guests who have nowhere to go," said Jose Ramirez, executive director of St. Anthony's.

While St. Anthony's shelter can accommodate 60 guests at a time, the organization has had to put a cap on the number of intakes, in order to alleviate transmission. "We have about 40 guests now. We are going to continue to maintain that to allow proper spacing," said Ramirez.

The homeless shelters run by Catholic Charities in New Jersey are facing similar concerns. John Westervelt, CEO of Catholic Charities of the Archdiocese of Newark, said that many shelters in the state do have space to take in some more, but are expected to reach capacity soon.

"In the event of a total shutdown, we will not be able to accept new clients because our building capacity will already be at maximum, preventing us from employing appropriate social distancing. This will be especially challenging in our individual shelters. In our family shelters, the plan will be for families to stay within their own rooms," said Westervelt.

At shelters that house sick residents, COVID-19 poses new and difficult concerns. The Catholic Worker in South Bend, Indiana, has two houses of hospitality — one for men and the other for women. Almost every guest at both hospitality houses has underlying health issues that make them vulnerable to infection. The leadership has imposed an early self-isolation on residents. "We just wanted to try and create more social distancing and mitigate the possibility of transmission," said co-founder Margaret Pfeil.

Although the houses could take in a few more homeless citizens, the health concerns of current residents pose a problem. "Because we do have people with pretty acute health conditions, we are not taking in extra folks right now. There's a Weather Amnesty overnight shelter in South Bend, so that's where we are sending people who need housing right now. We don't have further capacity here," said Pfeil.

With Catholic shelters running to capacity, the homeless now have very limited housing options and find themselves exposed to changing weather and diseases.

Meanwhile, the shelters and hospitality houses are doing all they can to prevent an outbreak of the virus among current residents. Apart from monitoring the temperature of residents every day, staff are working overtime to disinfect high-risk areas like common rooms, bathrooms, stairwells, bannisters, etc.

Other essential services for the homeless, like soup kitchens and thrift stores, have also taken a hit.

Soup kitchens that are operated by volunteers have had to apply the brakes on their programs. Beginning March 16, St. Francis of Assisi Soup Kitchen in Scranton, Pennsylvania, decided to provide only one boxed meal a day — from 11 a.m. to 12 p.m. All evening meals were suspended and entry to the community dining room prohibited.

It also suspended lunch deliveries at satellite locations in Oliphant, Archibald and Carbondale. "We were concerned that both the people coming to eat and the people serving are in the vulnerable population. Our volunteers are mainly elderly folk — so we made the determination to suspend the service," said Robert Williams, executive director.

The pandemic has laid bare the fragility of the social safety net made up of the free labor of Catholic volunteers.

The Paulist Center in Boston canceled its sit-down meal at the Wednesday Supper Club last week. Instead, meals were distributed by a few volunteers at the chapel door. 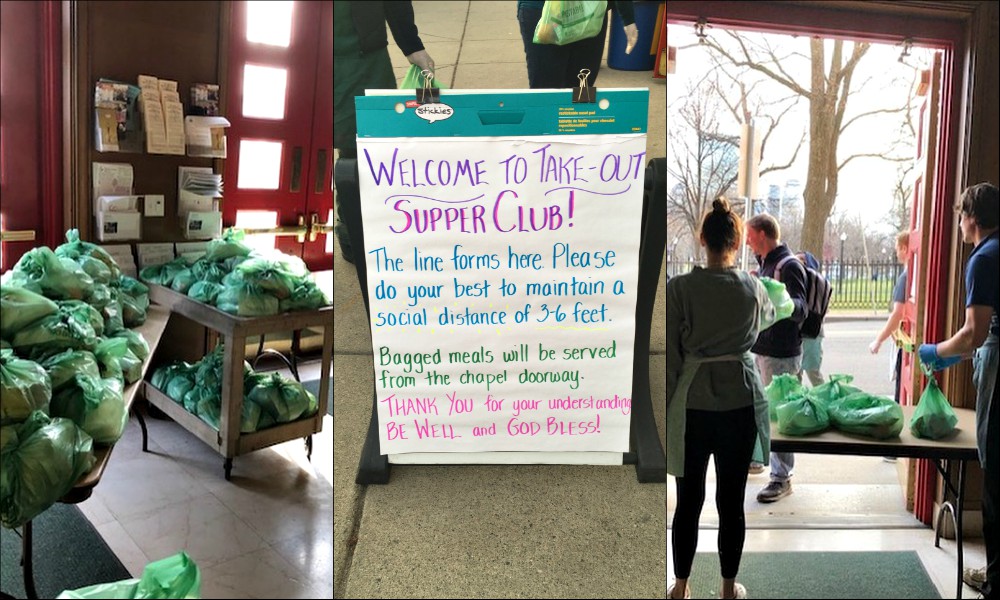 A notice informs community members that the Wednesday Supper Club services in the building have been suspended at the Paulist Center in Boston, as volunteers hand out takeaway meals. (Provided photos)

"The social component is a very strong aspect of our program but safety comes first," said Susan Rutkowski, pastoral minister of social justice and of the religious education program. Another reason the meal couldn't be convened was the presence of elderly and vulnerable Paulist priests who live in the building.

Volunteers stationed at the sidewalk helped in keeping people in line, while maintaining a distance from one another. "We are working with the Boston Police because we can't really have a large group of people together," said Rutkowski.

At St. Anthony's, the dining room is not operational anymore, instead offering meals served in a takeaway box outside the door.

Although homeless services are classified as essential for city ordinances, thoughts of a future lockdown are weighing heavily on many minds. Organizations are trying to put plans in place, but have no clear path ahead.

"I'm terrified of the possibility that we'd be told to close down. This is all unchartered territory. But we will do everything in our power to stay open, while remaining compliant with CDC regulations," said Williams.

Said Pfeil, "Never before have I sent an email asking volunteers not to come. We've spent 18 years building up a whole network of relationships, and we have hundreds of volunteers. And it's a very difficult time because people want to help, but we also have to set these boundaries right now." 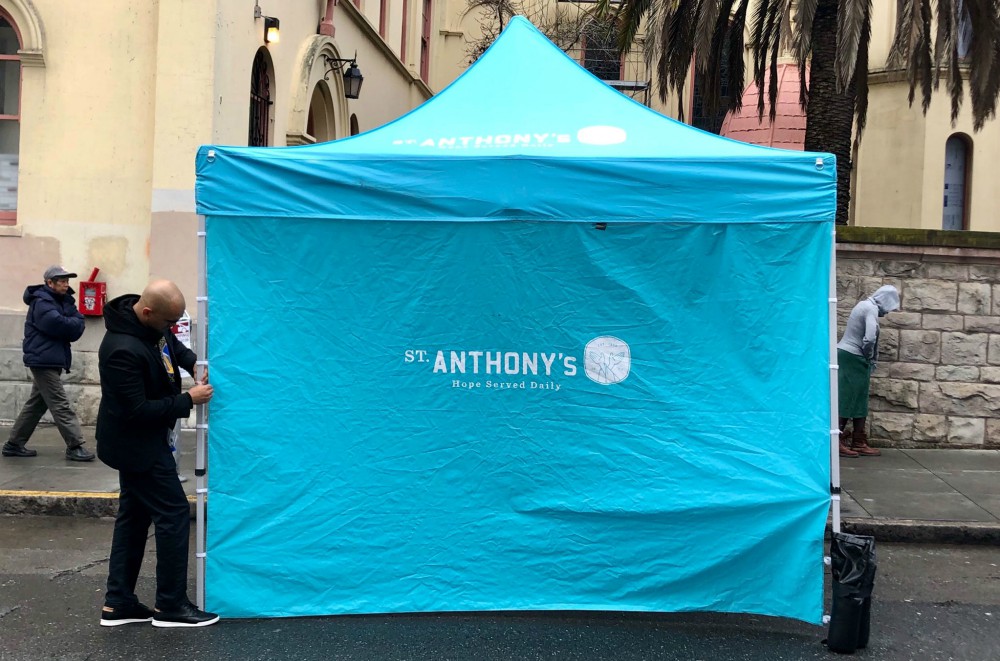 Volunteers set up a tent before distributing meals at St. Anthony's in San Francisco. (Provided photo)

COVID-19 has also put a lot of financial strain on services that mostly run on donations, grants and philanthropy, with almost little to no help from the government. Centers are having to incur extra expenses for the purchase of cleaning supplies, medicines, hand-washing stations, etc.

The St. Anthony's leadership team is currently contemplating worst-case scenarios. "We appreciate any support from our Catholic community to continue allowing us to do our work. We've already incurred about $70,000 to $100,000 in additional costs. It's going to take a toll on us at some point," said Ramirez.

Westervelt said that all Catholic Charities shelters are underfunded by the government and running on a deficit. "This national crisis will increase our deficit even more," he said.

As the country's public health crisis collides with the homelessness crisis, Pfeil thinks this is a good time to contemplate social responsibility. "This virus is reminding us how deeply interconnected we are. And there is an opportunity to respond with compassion and love. And we all need to discern what that means and respond accordingly," she said.

This story appears in the Coronavirus feature series. View the full series.
A version of this story appeared in the May 15-28, 2020 print issue under the headline: Pandemic hinders shelter and aid.