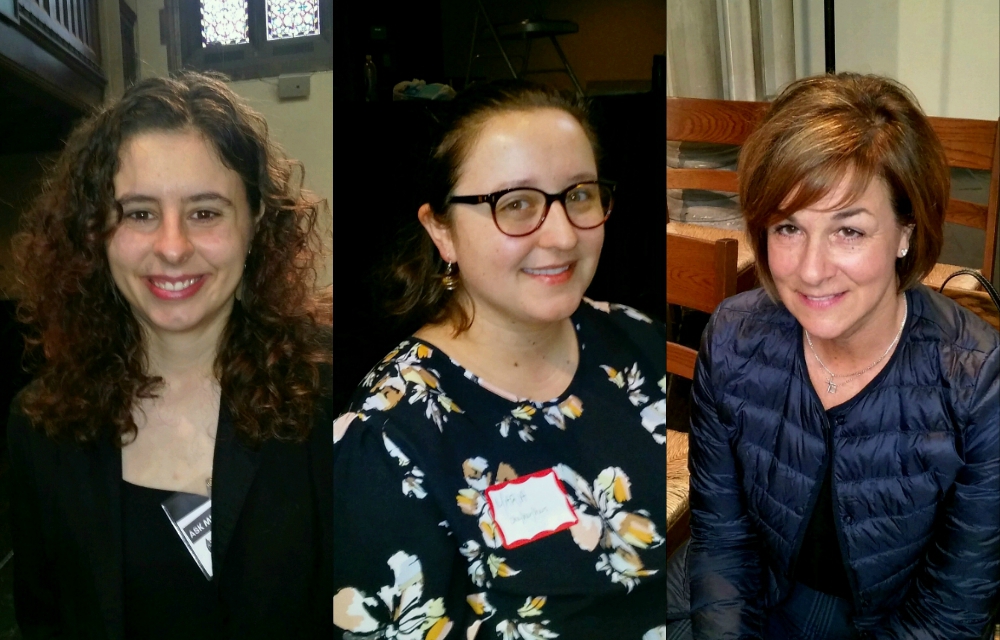 The location was significant: This particular conference on "(Re)Imagining Catholic Vocation" could not be held at most Catholic venues.

Sponsored by Call to Action, the event, according to organizer Abby Rampone, was directed at those Catholic ministers who feel they have "one foot in and one foot out" of the church, as well as those with "both feet in and both feet out."

Many of the 100 participants, said Rampone, responded to the conference with the comment "that I didn't know this space existed," particularly for those Catholics who want to be involved in ministry yet have issues with some church positions, particularly women's and LGBT issues.

"I wanted to create a space for those who aren't in Catholic world all the time," said Rampone, a student at Union raised Catholic in rural Vermont.

The conference grew out of a concerted effort by Call to Action, a Catholic reform group, to grow its community beyond the Second Vatican Council generation that forged the organization in the 1970s. Those members are now graying, noted Zach Johnson of Minneapolis, executive director of Call to Action.

He described how the turmoil in the church over the past year has provided "a new opening" to reach Catholics, including younger generations, who are now paying attention. Many of the attendees at the weekend conference were Catholic students at Protestant seminaries such as Union.

Among them was Maria Michonski, a divinity student at Vanderbilt University in Nashville, Tennessee, a self-described "queer woman leaving divinity school with scant options."

Michonski is working on a study of Catholic queer women who are reflecting upon whether to stay or leave the church. The conference, she said, was a good space to explore those concerns.

She described herself as struggling with the issue of being a queer Catholic.

"Catholicism is a part of me as big as being a woman or queer," she said. "It's not something I can cut out of my identity."

She's discovered that women like herself debate among themselves whether to stay in the church and push for change or to leave until "the church lives up to what they believe it should be." While the discussions are often held online, this conference offered a rare opportunity for person-to-person discussion.

Michonski is interested in working in Catholic ministry but said she is unlikely to land a position, particularly in her home Nashville Diocese, which she described as conservative and part of a community small enough that out-of-the-closet queer women cannot hide.

In recent years, dozens of LGBT persons working in Catholic parishes and schools have lost their jobs, particularly those who have entered into civil marriages.

Janet Antico, a theology student at Drew University in New Jersey, a historically Methodist institution, described herself as a lifelong Catholic who taught religious education and participated in the Catholic school education of her children.

She said she was "very frustrated with the hierarchy" over the church's view of women in ministry. Antico said she attended the conference "to see what is going on."

Speakers at the conference included keynote speaker Jamie Manson, columnist for National Catholic Reporter and frequent writer on Christian feminism, and Craig Ford, theology professor at Fordham University who spoke on how supporters of gay rights in the church should not discard natural law theory.

Other speakers addressed varied topics such as:

Participants included those angry with the church, particularly over sex abuse, gay rights and feminism issues, as well as at least one seminarian who plans to be ordained a priest.

"I'm fleeing the church in terror," said Ann Wingert of Stroudsburg, Pennsylvania, who devoted $6,000 to self-publishing a book that castigates male dominance in Catholicism.

"I am beyond furious. But I am an engineer, you see a problem and you fix it," she said.

The seminarian who attended said he wanted to remain anonymous. He said his superiors would not want him to attend such a conference. But he said he felt it was important to hear what was going on among Catholics who often consider themselves to be on the fringes of church life.