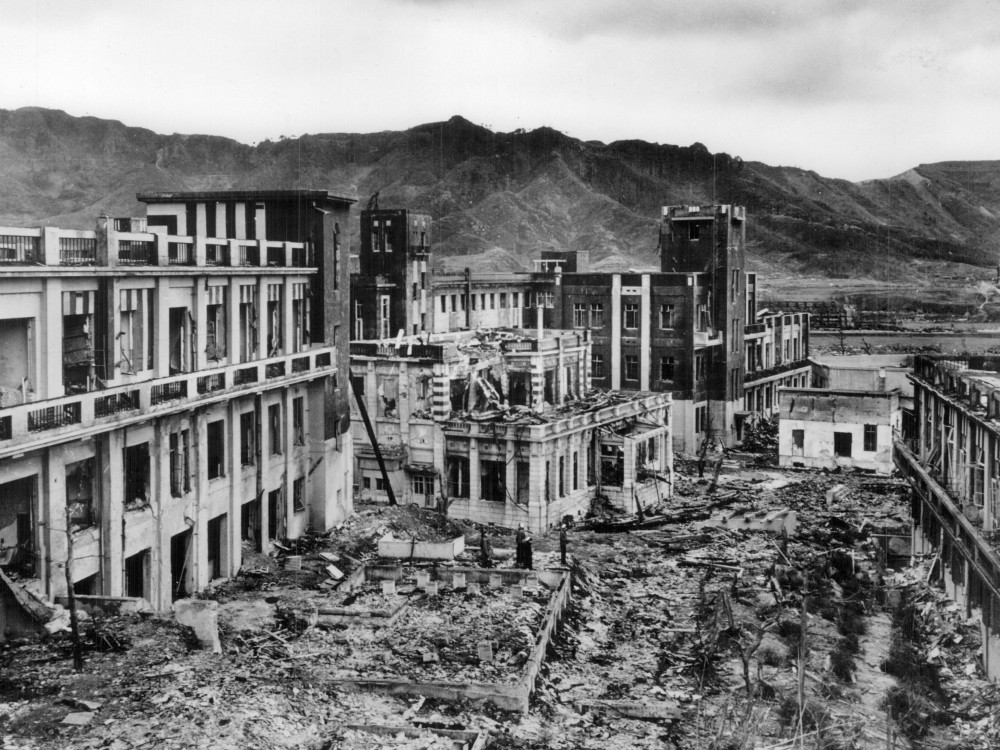 Nagasaki, Japan, is shown four years after an atomic bomb was detonated over the city Aug. 9, 1945. "Hiroshima challenged my faith as a Christian in a way I am only now beginning to understand," the late Archbishop Raymond G. Hunthausen of Seattle said in 1981. "That awful event and its successor at Nagasaki sank into my soul, as they have in fact sunk into the souls of all of us, whether we recognize it or not." (CNS/USA TODAY NETWORK via Reuters/Milwaukee Journal Sentinel files)

"I am grateful for having been invited to speak to you on disarmament because it forces me to a kind of personal disarmament. This is a subject I have thought about and prayed over for many years. I can recall vividly hearing the news of the atomic bombing of Hiroshima in 1945. I was deeply shocked. I could not then put into words the shock I felt from the news that a city of hundreds of thousands of people had been devastated by a single bomb. Hiroshima challenged my faith as a Christian in a way I am only now beginning to understand. That awful event and its successor at Nagasaki sank into my soul, as they have in fact sunk into the souls of all of us, whether we recognize it or not."

Those are the opening lines of the "Faith and Disarmament" speech Seattle Archbishop Raymond Hunthausen delivered on June 12, 1981. Hunthausen had become active in resistance to the U.S. stockpiling of nuclear weapons and the new Trident submarine-based nuclear weapons system, which included the Bangor Trident submarine base in Puget Sound just 20 miles west of Seattle.

In that 1981 speech, Hunthausen referred to the Trident submarines based there as "the Auschwitz of Puget Sound." In context, it was both a profound and prophetic statement of fact. As Hunthausen said, "Trident is the Auschwitz of Puget Sound because of the massive cooperation required in our area — the enormous sinful complicity that is necessary — for the eventual incineration of millions of our brother and sister human beings."

Bill Moyer of the Backbone Campaign (dedicated to a world "where life, community, nature, and our obligations to future generations are honored as sacred") spoke to Hunthausen's controversial statement during a talk at Ground Zero Center for Nonviolent Action on August 5, 2018: "In his [Hunthausen's] comparison of Trident submarines to the 'Auschwitz of Puget Sound,' which everybody quotes, it wasn't so much that they are a tool of genocide, which, of course, they are... but it was that they are invisible; the neighbors of Auschwitz didn't want to know what was going on; they felt more comfortable when it was under the surface." 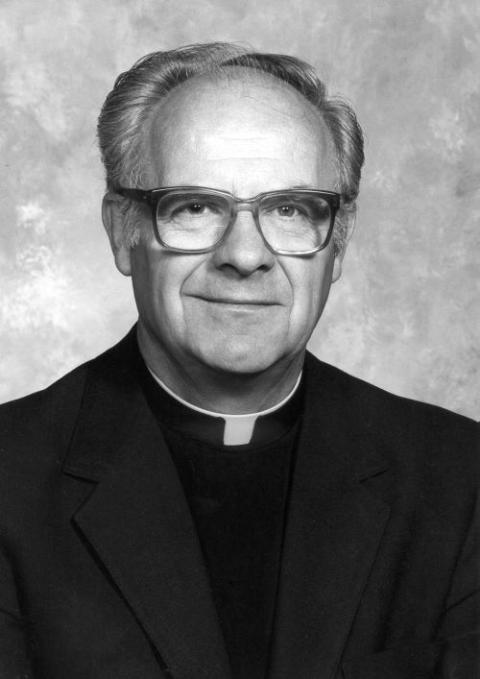 The late Archbishop Raymond G. Hunthausen of Seattle, shown in an undated photo, was an ardent critic of nuclear weapons, once calling a Trident submarine base near Seattle "the Auschwitz of Puget Sound." He died July 22, 2018; his 100th birthday is Aug. 21. (CNS/courtesy Archdiocese of Seattle)

Essentially, Hunthausen made the invisible visible so that people would be forced to bring it into their consciousness and address its moral implications.

Well before his 1981 "Faith and Disarmament" speech, Hunthausen was gaining a deep understanding of, and respect for, the Pacific Life Community and Ground Zero Center for Nonviolent Action, the activist community developing in nonviolent resistance to nuclear weapons, especially Trident. These were people of deep convictions who were engaging in nonviolent civil resistance, literally putting their bodies on the line, and were fully prepared to accept the legal consequences of their actions. They were essentially attempting to make the invisible visible through their actions.

At a time when the United States is engaging in the largest buildup of our nuclear arsenal since the Cold War, and when we are increasing the risk of nuclear war with not only Russia but also China, we would do well to learn from Archbishop Hunthausen, who died in July 2018 and whose 100th birthday would be Aug. 21.

War tax resistance became a personal action Hunthausen felt he could take. He redirected a symbolic portion of his income tax as a protest against nuclear weapons, placing it in an escrow account benefiting the World Peace Tax Fund.

"I think the teaching of Jesus tells us to render to a nuclear-armed Caesar what that Caesar deserves – tax resistance. And to begin to render to God alone that complete trust which we now give, through our tax dollars, to a demonic form of power," he said in his "Faith and Disarmament" speech. "Some would call what I am urging 'civil disobedience.' I prefer to see it as obedience to God."

Essentially, Hunthausen made the invisible visible so that people would be forced to bring it into their consciousness and address its moral implications.

Hunthausen's views on a number of issues, including nuclear weapons, did not sit well with the Vatican, and Hunthausen suffered the consequences. He did, however, have the support of some of his fellow priests and bishops. One was Bishop Thomas Gumbleton, who told me in a June 29, 2021, interview that he was "proud to have been a friend to Ray Hunthausen, and supportive of what he did."

Gumbleton wrote a tribute to Hunthausen in Frank Fromherz's 2019 book A Disarming Spirit: The life of Archbishop Raymond Hunthausen in which he concluded, "Ray Hunthausen is a role model and hero for me because of his integrity and total commitment to leading the Church in its mission to transform our world into as close an image of the Reign of God as possible. I am a better person and bishop because I knew him."

Hunthausen's actions and words contributed to a deepening awareness of the evil of nuclear weapons at that time, Gumbleton said.

"Right now there isn't an awareness. If you were to go into a grocery store and interview people at random you would find that almost no one knows anything about our nuclear arsenal, even though we spend fantastic amounts of money," he said. "Right now there is fighting over an infrastructure bill in the Senate, and you could easily take half the military budget and take care of everything in terms of human needs. But no one would ever suggest that, and for me it is a profound and moral evil."

For Gumbleton, as with Hunthausen, beyond the evil of building and deploying nuclear weapons, it is an absolute sin to commit to their use. Gumbleton spoke of how every crew member on a Trident submarine has taken an oath, and must be prepared and committed to obeying the order to launch the ballistic missiles that would incinerate millions of human beings in a nuclear war. That, in itself, he said, is an "absolute sin."

Gumbleton noted that in his Faith and Disarmament speech, Hunthausen quoted Jesuit Fr. Richard McSorley, who wrote the 1976 article "It's a Sin to Build a Nuclear Weapon." McSorley wrote: "The taproot of violence in our society today is our intention to use nuclear weapons. Once we have agreed to that, all other evil is minor in comparison. Until we squarely face the question of our consent to use nuclear weapons, any hope of large scale improvement of public morality is doomed to failure."

"The impact of our nuclear weapons is beyond description," Gumbleton said. "It's the destruction of the planet as we know it. Once we've made that moral decision, then we can make any kind of moral decision and use violence. So you have a peace officer who can kneel on the neck of a man for 8 ½ minutes — and he died — and feel that's OK, that kind of violence. And in a sense that's nothing compared to what we are preparing for each and every day [with nuclear weapons]. So there is no issue that exceeds this in its evil."

Gumbleton also noted that while some bishops have said President Joe Biden should be denied Communion for his stance on abortion, Catholics serving on a Trident ballistic missile submarine can receive Communion from a Catholic chaplain.

"They reinforce these enlisted people wherever we have these weapons, essentially giving their blessing and that of the church," Gumbleton said. "You have Catholic chaplains supporting the military people who have the intention to use nuclear weapons."

Instead, Gumbleton said, the church needs reform to contend with the evil that threatens to destroy the planet: through war and environmental destruction.

"Right now we need a profound conversion within the church if we are going to speak God's word with any type of authenticity," he said. "That is not going on right now. … So that makes someone like Ray Hunthausen stand out all the more. If we had 300 of the bishops speaking out like Ray Hunthausen, we might be getting someplace."

In his 1981 speech, Hunthausen challenged our nation to disarm and spoke boldly to what he saw as the central reasons for our nation's reliance on nuclear weapons: "We whose nuclear arms terrify millions around the globe are terrified by the thought of being without them. The thought of our nation without such power feels naked. Propaganda and a particular way of life have clothed us to death. To relinquish our hold on global destruction feels like risking everything, and it is risking everything — but in a direction opposite to the way in which we now risk everything. Nuclear arms protect privilege an exploitation. Giving them up would mean our having to give up economic power over other peoples. Peace and justice go together. On the path we now follow, our economic policies toward other countries require nuclear weapons. Giving up the weapons would mean giving up more than our means of global terror. It would mean giving up the reason for the terror—our privileged place in the world."

Forty years since Hunthausen called Trident "the Auschwitz of Puget Sound," and 100 years since his birth, he continues to call us to make the invisible visible, to state clearly that killing is simply wrong, and that nuclear weapons, which are omnicidal by design, are truly an abomination in the eyes of God.

Ground Zero Center for Nonviolent Action and the Pacific Life Community still work to raise awareness of the threat posed by the Trident nuclear submarine base in the heart of Puget Sound and the Seattle Archdiocese. Construction of 12 new ballistic missile submarines is underway, a new missile and warhead are in the planning stages, and current warheads have been made more lethal, adding heat to a new Cold War.

It comes down to our individual choice of how to engage the issue. Archbishop Hunthausen did not tell us what to do; he told us what he was going to do and why. His spirit lives on in his words and actions. He still calls us to take up the cross in the nuclear age. How will we join him?

[Leonard Eiger coordinates communications for Ground Zero Center for Nonviolent Action in Poulsbo, Washington. The center explores the meaning and practice of nonviolence from a perspective of deep spiritual reflection, providing a means for witnessing to and resisting all nuclear weapons, especially Trident.]

*This article has been updated. An earlier version used the word "homicidal" instead of omnicidal.

Editor's Note: A Disarming Spirit: The life of Archbishop Raymond Hunthausen is available from Tsehai Publishers. All profits from its sale will be given to Ground Zero Community.