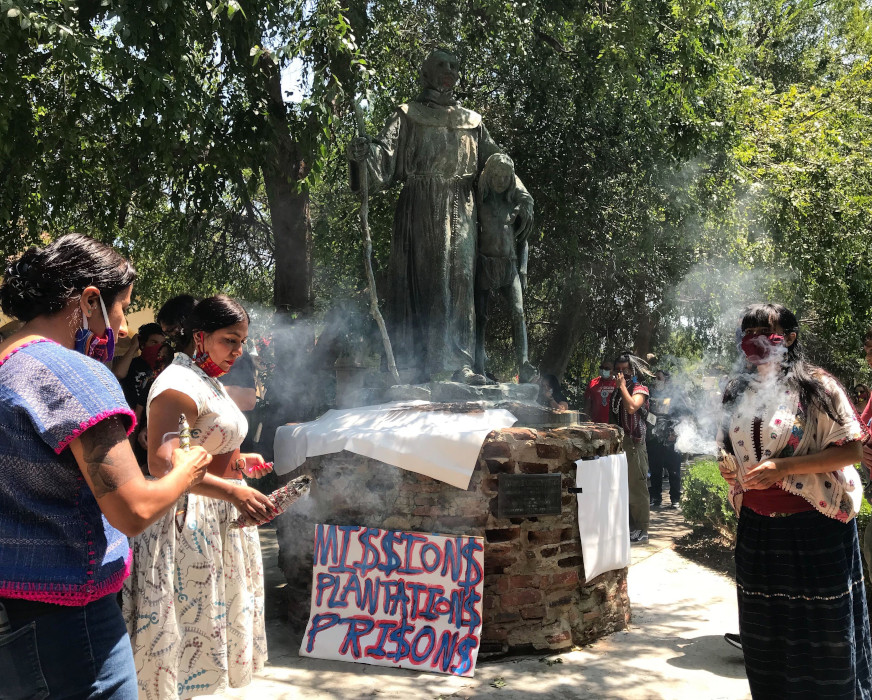 Women burn sage during a ceremony next to the Junipero Serra statue at Brand Park in Mission Hills, California, June 27, 2020. The park is across from the San Fernando Mission. (AP/RNS/Alejandra Molina)

Jessa Calderon initially felt numb watching the Junipero Serra statue topple to the ground as it was yanked from its platform with yellow rope tied around its neck.

Within minutes, she was in tears.

"I began to cry hysterically. It was like a sense of relief," said Calderon, a descendant of Gabrielino-Tongva and Ventureño Chumash, who witnessed the toppling on June 20 in downtown Los Angeles.

Calderon and other California Native people prayed and left offerings, including medicinal herbs, at a makeshift altar before activists took down the statue of Serra, the 18th-century Franciscan priest who, while credited with spreading the Catholic faith in the West Coast, is also seen as part of an imperial conquest that enslaved Native Americans.

The ceremony, Calderon said, was a way to help release painful energy their disrespected ancestors may be carrying in the afterlife.

As Californians once again reckon with their statues of Serra, the founder of what would become 21 missions along the California coast, Native people and Indigenous scholars say it's time for their voices to be heard and their existence to be recognized.

This public scrutiny of Serra has reemerged in the wake of Black Lives Matter protests denouncing institutional racism and police brutality that led to the toppling of monuments honoring Confederate leaders.

In California, this has resulted in protesters overthrowing Serra statues in San Francisco, Los Angeles and most recently in Sacramento on July 4. Catholic parishes in Orange, Monterey  and Los Angeles counties have removed statues of Serra in fear of potential vandalism.

Activists in the city of Ventura are demanding the Serra monument near City Hall be removed as soon as possible and on July 7 virtually gathered with community stakeholders to discuss the statue, which the mayor, a pastor and a tribal leader recently pledged to remove.

To Calderon, this renewed attention on Serra can help enlighten the public who, she said, "believed Native Americans didn't exist anymore."

"Now that this moment is happening, we have a story to tell," Calderon said.

The Catholic Church response to the toppling of the statues has been persistent.

The California Catholic Conference of Bishops in a statement said protesters "failed the test" of history in toppling Serra statues.

Salvatore Joseph Cordileone and José Gomez, archbishops of San Francisco and Los Angeles, issued letters staunchly defending the image and history of Serra and criticizing those who defaced the statues.

Cordileone, in a June 20 statement, referred to protesters as embodying "mob rule." He said Serra made heroic sacrifices to protect Indigenous people from Spanish soldiers. While Cordileone acknowledged "historical wrongs have occurred," he said they cannot be "righted by re-writing history." Healing is needed, he said.

A week later, Cordileone held an exorcism at Golden Gate Park, where the statue was taken down, because he said "evil has made itself present here."

Gomez, in a June 29 letter, acknowledged that the image of Serra and the missions evoke "painful memories for some people." However, he denounced activists for "revising" history to portray Serra as the "focus of all the abuses committed against California's indigenous peoples." 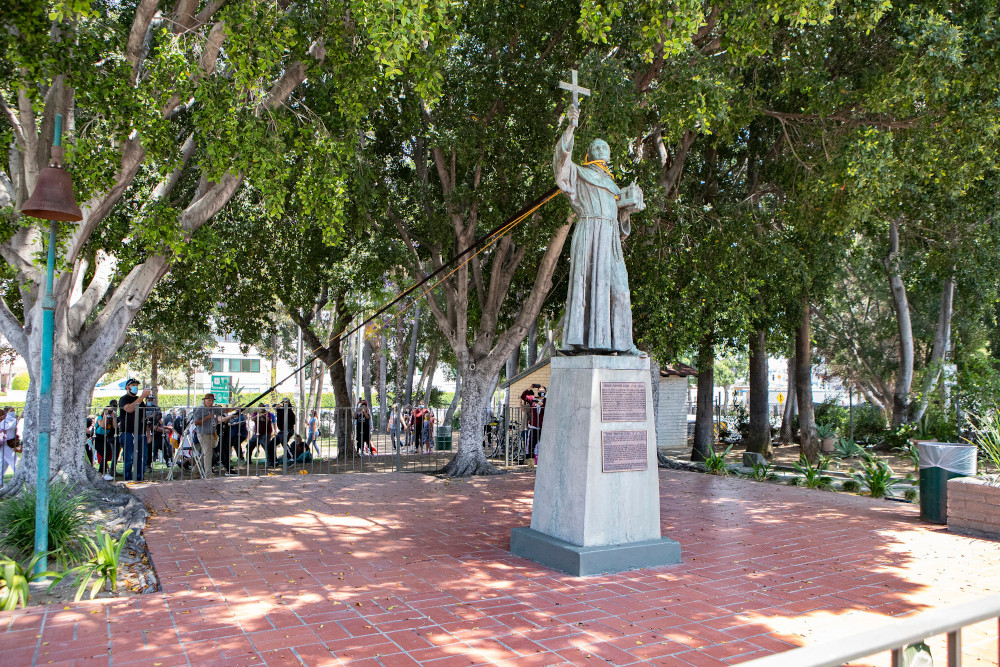 He said that crimes and abuses Serra is blamed for happened after his death. Gomez likened California missions to other communes and "communitarian" societies. He said Serra "did not impose Christianity, he proposed it." And, he said, Serra wrote and advocated for a "bill of rights" for the Native peoples.

These responses have galvanized Indigenous scholars who want the Catholic Church to fully admit to a history of colonialism that led to the loss of culture and land among the Native community.

Through a project known as Critical Mission Studies, University of California researchers and Indigenous scholars are working to provide a more nuanced understanding of the state's missions. The research highlights Native, Mexican and Mexican-American voices and "supports Indigenous perspectives on the California colonial missions and their aftermath."

As part of this project, Native people and Indigenous scholars will virtually gather on July 15 for a Zoom event titled "Toppling Mission Monuments and Mythologies: California Indian Scholars and Allies Respond."

To Indigenous scholars such as Jonathan Cordero, who is part of this project, the statements from the archbishops are factually wrong and misleading.

Cordero, who studies California Indians during the Spanish colonial and early American periods, takes issue with a number of their claims.

He said Serra was both a colonist and an evangelist.

"He was responsible for establishing self-governing colonies of Hispanicized and industrious Native citizens in service of the Spanish crown," said Cordero.

Cordero criticizes the claim that Serra advocated for a "bill of rights" he wrote for the Native peoples. Serra, said Cordero, did not get any new rights for California Indians.

And, Cordero said, missionaries worked with the Spanish military to control the Native population, which was confined to the mission grounds. Indigenous people, he said, were granted a two-week furlough but they had to come back. If they didn't, they were sought, and in some instances, killed by the military, Cordero said.

To Cordero, if the Catholic Church wants justice for California Indians, "it begins by telling the truth of what happened at the California missions."

The truth is what Caroline Ward, of the Fernandeño Tataviam Band of Mission Indians, demanded at a June 27 ceremony next to the Serra statue across from the San Fernando Mission.

People knelt, burned sage and pounded the drums in front of the statue of Serra, who many in Spanish referred to as an "asesino," a murderer.

Ward watched as a group of young activists covered the statue with a black plastic sheet and placed a chain around its neck. It felt liberating, she said.

"The church still refuses to acknowledge the treatment of our ancestors," said Ward, addressing the dozens of people who were there. 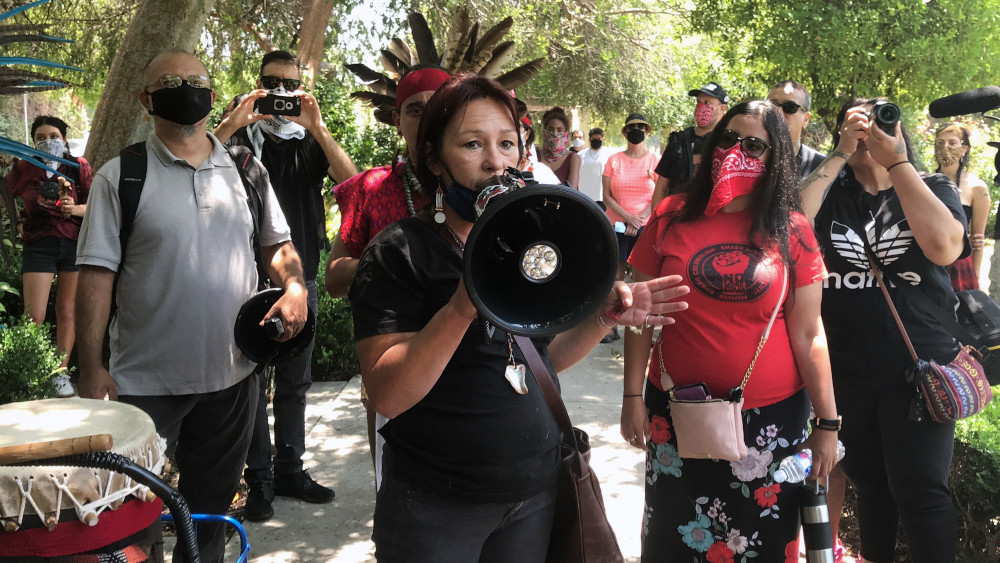 Caroline Ward, center, of the Fernandeño Tataviam Band of Mission Indians, speaks during a June 27, 2020, ceremony next to the Junipero Serra statue in Mission Hills. She said the Catholic Church needs to acknowledge the mistreatment of Native people at the missions. (AP/RNS/Alejandra Molina)

While Ward demanded the statue be removed by Sept. 23, on the five-year anniversary of Serra's sainthood, it has since been temporarily taken down by the city of Los Angeles to prevent violence, according to the San Fernando Valley Sun.

Ward applauds the statue removal, but said the Catholic Church still needs to acknowledge the complete stories of their ancestors within the mission system. That is half of the healing process, she said.

"If they put it back up, it's going to come back down," she said.

Now, Ward would like to see the missions transferred to Native people and be repurposed into cultural and healing centers.

"We are the first people of this land and nobody knows we're here," she said.

For UC Santa Cruz professor Yve Chavez, who is also part of the Critical Mission Studies Project, it's crucial to recognize the different Serra viewpoints among the Native community.

Some admonish the Catholic Church due to this history of mistreatment, while others try to balance their Catholic faith with knowing their ancestors were forced to live in the missions and "were sometimes doing what they had to do to survive," she said.

"If we completely dismiss the experience of these individuals, we lose sight of the bravery of our ancestors who managed to survive a very difficult situation," said Chavez, a descendant of Tongva.

To Chavez, whose research focuses on Indigenous art of Southern California and the missions, Serra should not be seen as representative of the entire Catholic Church or even the mission system.

Removing Serra statues won't make the missions any less Catholic, Chavez said. Instead, it can "help our Native communities feel a sense of recognition that these are not spaces that are strictly about Serra anymore," said Chavez.

Native people provided the labor that built the mission system and made up the majority of its population, said Chavez. The missions stand on ancestral homelands and some are located in preexisting Native villages.

"These are also spaces that we can claim as our own," Chavez added.

Whether it's through the removal of statues or through more public awareness of why these monuments are problematic, "now our communities have an opportunity to be heard on a public level," Chavez said.

She hopes people can recognize that "Native people are still alive and these are their homelands."