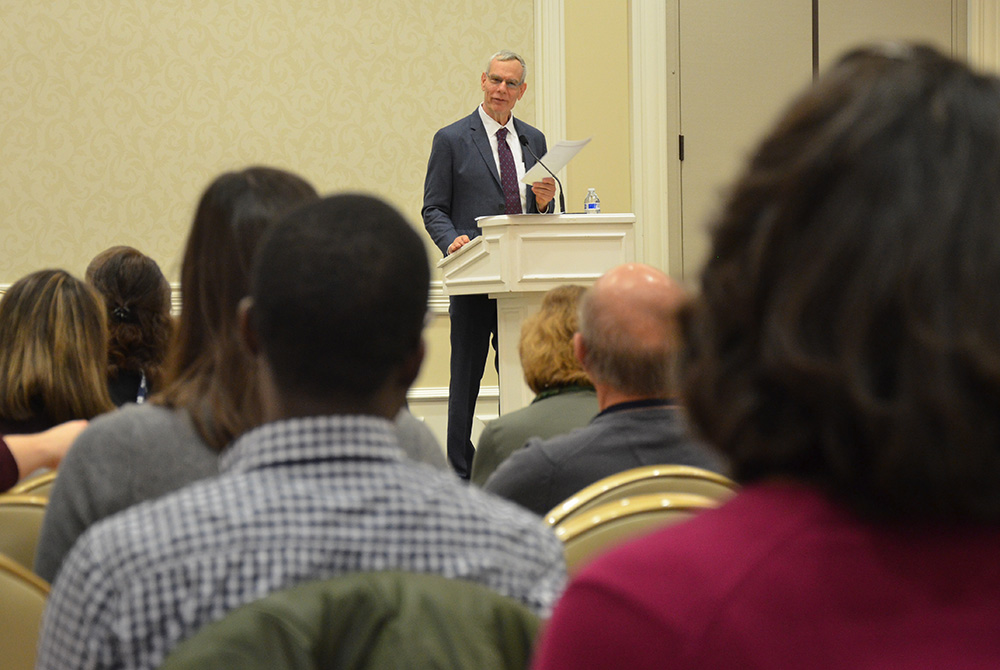 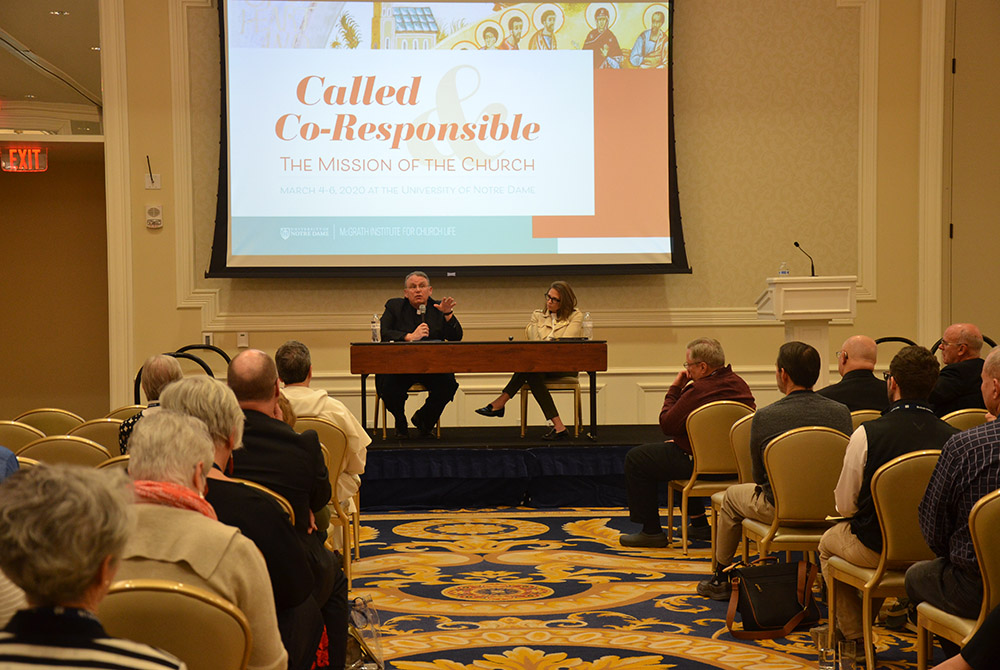 Get ready to hear a lot about "co-responsibility" in the church. It's already showing up as the theme of events from San Diego to Washington D.C. Last week, the University of Notre Dame hosted a three-day conference "exploring co-responsibility for the mission of the church."

"What is co-responsibility? We're not really sure," said John Cavadini, director of the McGrath Institute for Church Life at Notre Dame, organizer of the "Called and Co-responsible" conference March 4-6.

He was only half-joking, noting that the conference was exploratory, a way to "work our way into this idea" — one that calls for a new way to think about the relationship between laypeople and the ordained.

"Co-responsibility is about teamwork of some kind. It takes two to be co-anything," Cavadini said, noting the diversity of the event's speakers, which included four lay women and three bishops as keynoters.

It may sound like an inclusive concept, but "co-responsibility" means different things to different people. Those using it in the church usually reference former Pope Benedict XVI, who introduced the idea of "co-responsibility" in an address to the Diocese of Rome in 2009 and elaborated on it during a message to the International Forum of Catholic Action in 2012.

In both places, the former pope contrasted "co-responsibility" with "collaboration." The latter has been more commonly used since the Second Vatican Council. The former seems more sensitive to the differences in the respective roles of clergy and laypeople, while emphasizing their unity in the church.

Benedict said the laity can "make its own specific contribution to the ecclesial mission with respect for the ministries and tasks that each one has in the life of the Church and always in cordial communion with the bishops," according to the 2012 message. 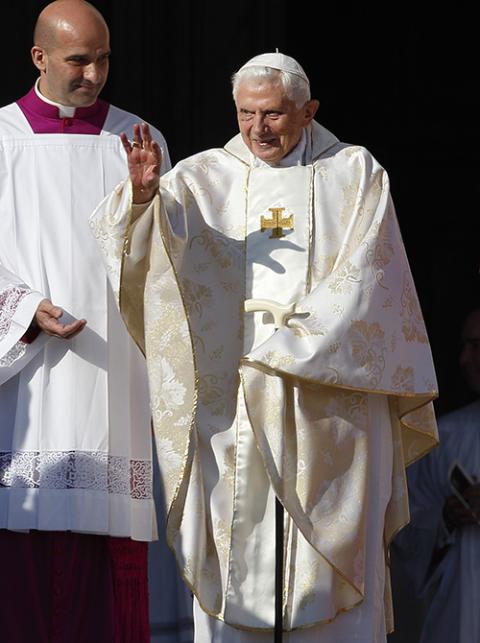 In this 2014 file photo, retired Pope Benedict XVI arrives for the beatification Mass of Blessed Paul VI celebrated by Pope Francis in St. Peter's Square at the Vatican. (CNS/Paul Haring)

Priesthood of the baptized

In his keynote on "Co-Responsibility and Leadership," Cavadini noted that Benedict seemed to be calling for a recovery of the "royal priesthood" of all the baptized, as noted in 1 Peter. And while Pope Francis does not use the word "co-responsibility," the current pontiff seems to have adopted that concept "on steroids," he said.

"Leadership is not limited to a class of individual," said Cavadini, adding that he found it "refreshing" to "move the center of gravity away from the hierarchy."

"It is a mistake to reserve the word 'priestly' to the ordained," he said, especially in the context of evangelization, which is the work of all in the church.

Similarly, he cautioned against evaluating the church as if it were a secular organization, rather than a mystery.

"There is no zero-sum here," Cavadini said. "It's not that the more priesthood the ordained have, the less we have. That's a clericalized way of thinking that ends up centering the church on the ordained ... as if they are the church."

A true exercise of the priesthood of the baptized is not "freelancing," he said, but rather must be in communion with the ordained leadership, citing as an example Dorothy Day's relationship to priests and church leaders.

Cavadini said the church has not absorbed Vatican II's major insights in ecclesiology "because I think we have decided to analyze the call for lay participation as a call for increased power of the laity, but power in a structure that is both excessively clericalized and thus ironically secularized, because it is defined as a power structure."

"Instead we should use the Vatican II vision to re-center the church around a mystery of communion that does not displace or render irrelevant the hierarchy of leadership … but finds the fruits of that leadership precisely in the leadership of the baptized," he said.

Bishop Frank Caggiano of Bridgeport, Connecticut, speaking on "Co-Responsible Approaches to Evangelization," also counseled against defining co-responsibility as about authority and power, but rather as something far deeper and more mysterious.

The danger is "to reduce it just to tasks to be done and to see ourselves in the different states of life as somehow in competition, which is crazy," he said.

Instead, he sees in clergy and laity "a great complementarity as different parts of the body." 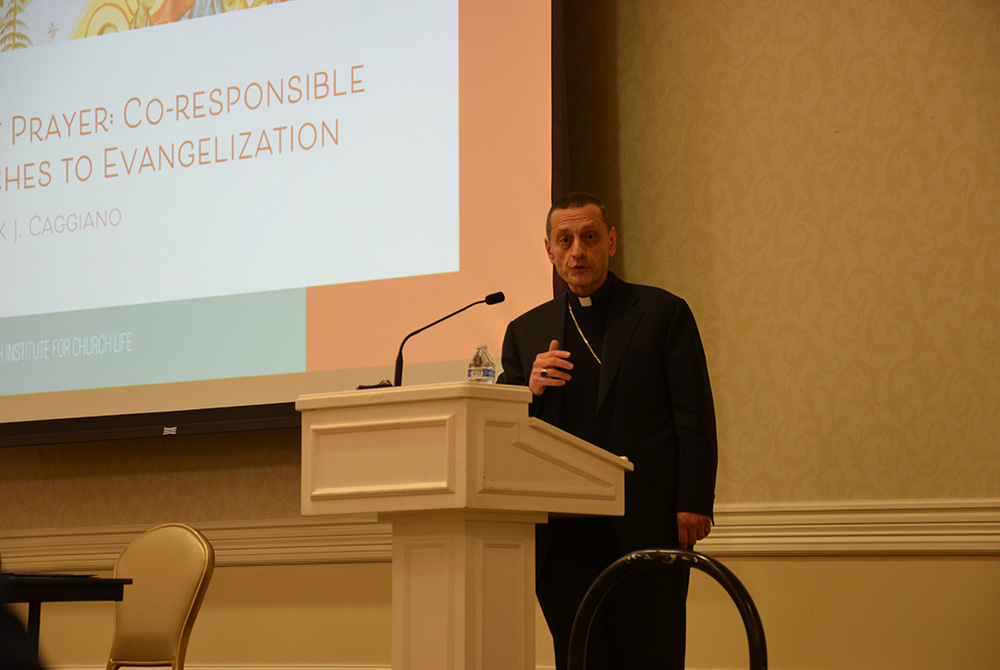 In breakout sessions, presenters provided practical examples of co-responsibility in action, in parishes, formation, education, "cultures of life" and institutions. Keynoter Katherine Angulo of the McGrath Institute gave an overview on promoting co-responsibility in the Hispanic community.

Betsy Bohlen, chief operating officer for the Archdiocese of Chicago, argued that the relatively new field of management can help the church live out its mission. "Our diocesan structures are actually large and complicated, and we tend to underestimate that at our peril," she said.

In a presentation on "Forming Pastoral Leaders for Co-Responsibility," Colleen Moore, program director for Echo, a two-year graduate service learning program, argued that clergy and laity are too often "familiar strangers" to one another, but really need to be neighbors for co-responsibility to work.

"In co-responsibility, there are no 'my problems' or 'your problems,' " she said. "They're our problems."

She described how her formation as a layperson alongside seminarians benefitted both groups.

"I believe that integrated pastoral leadership education, focused on the mission and vision of the church, creates healthier, more balanced, mature, more human pastoral ministers not afraid of encountering one another and the people of God," Moore said. "And it guards against insularity."

Yet during various question-and-answer portions of the conference, some participants reported that co-responsibility is not always happening on the ground. One said she was scared to use the word "co-responsible" with seminarians because they "feel like we're trying to take away their power," as one once told her.

Another participant who worked at a seminary said she noticed more integration at schools for religious order priests. At diocesan seminaries, "bishops say they will pull their men out if we have combined classes with laity and women."

Yet, in the midst of the "twin crises of abuse and mistrust," the church faces an opportunity for transformation toward more diverse leadership, said Kerry Robinson, global ambassador of Leadership Roundtable, which promotes best managerial practices in the church.

"Diversity matters. Who is at the tables of decision-making matters. We need to solve for myopia," she said in her presentation on "Co-Responsibility for a Culture of Healing in the Church."

Related: Leadership Roundtable brings a dose of reality to the church 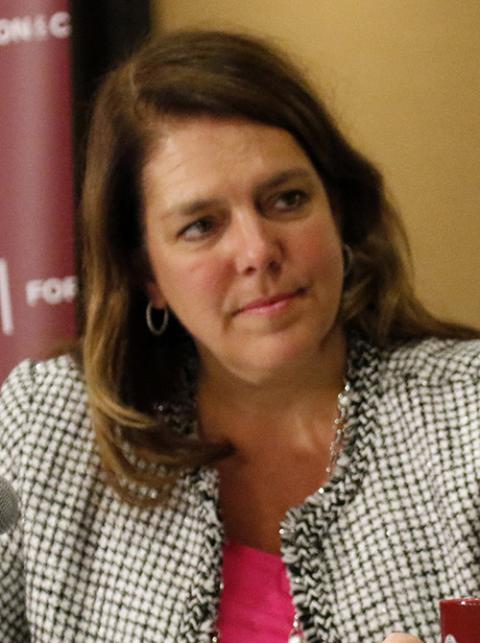 Robinson noted that a young Catholic woman can reach the highest levels of decision-making in their careers. "But if she discerns a vocation to service to the church, there are unnecessary ceilings," she said.

"I don't want to blame anyone in all of this," she said. "All of us have a responsibility to make these cultural changes."

Bishop Bill Wack of Pensacola-Tallahassee, Florida, described how shared leadership works in parishes in his diocese and at the diocese's pastoral center. But he emphasized how the foundation of co-responsibility is not about roles and ministries, but about holiness. The vocation of everyone, he said, "is being the person God created you to be."

"We still seem too focused, even today, on what the laity are allowed to do in church," he said, adding that the "apostolate of the laity" is "much grander" than assisting in liturgy or even in the church.

"Even though Vatican II ended 50 years ago, we are only beginning to grasp what God is asking of us all," he said.