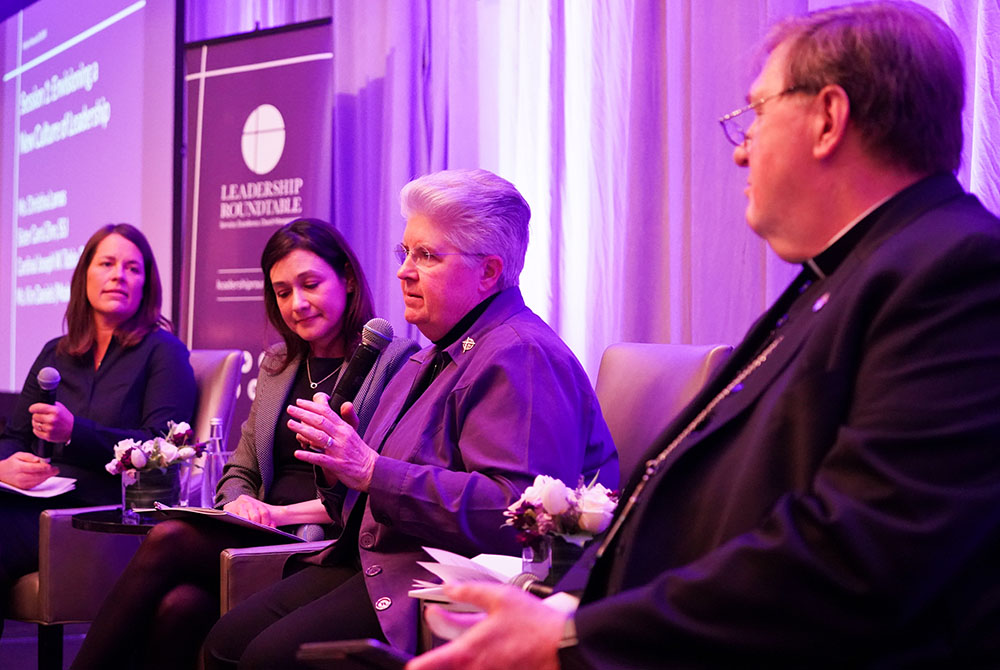 No event planner could have orchestrated a scene that better explains the state of the church in the United States at this moment than the recent tableau that unfolded in a large ballroom in the Fairmont Hotel in Washington, D.C.

Sponsored by the Leadership Roundtable, more than 260 people gathered in small groups at, appropriately enough, round tables for a by-invitation only discussion of some of the weightiest questions facing the U.S. church in the 21st century.

Among the over 260 participants were 12 bishops and archbishops and at least one cardinal — Joseph Tobin of Newark, New Jersey, who also participated as a panelist. Among the women religious present was St. Joseph Sr. Carol Zinn, executive director of the Leadership Conference of Women Religious and a panelist and co-host of the event. The hierarchy present included Archbishop Wilton Gregory of Washington, D.C., Archbishop Charles Scicluna of Malta, also a panelist, and Archbishop Christophe Pierre, apostolic nuncio to the United States and a co-host. Other co-hosts listed included cardinals Sean O'Malley of Boston and Blase Cupich of Chicago.

Attendees hailed from more than 60 dioceses in the United States and checked off an impressive array of demographic characteristics. By the Leadership Roundtable's own calculation, the crowd included canon lawyers, corporate professionals, senior diocesan staff members, theologians, abuse survivors, media professionals, philanthropists and Catholic community foundations, seminarians, women and men religious, ordained and lay, and by my count, representatives of enough Catholic agencies and organizations that one might be convinced anew that the church still matters.

There were young priests in flowing cassocks and older sisters in full habit and lots other vowed and ordained, a healthy representation of the "gold" of the church's now and future state — young people — avidly courted and prominently placed. There was an encouraging representation of young Hispanic leadership, as well as millennials deeply embedded in important official ministries within the institution. One of the best lines of the day and a half event came from a young lay leader leading a panel of other young lay leaders: "Not about us without us!" In other words, don't just talk about us, invite us in and give us something to do.

Here in this neutral space, the nondescript acreage of a hotel ballroom, big screens lurked overhead for the occasional power point presentation while laptop-equipped note takers transmitted directly to a control center where topics were enumerated and prioritized. Here in this kind of synodal space of the future, no one, not even the papal representative, voiced a public objection to the prevailing motivation for the gathering: the church is in crisis and needs help.

The Leadership Roundtable was organized around that motivation 15 years ago and has been working on that premise ever since. The organization defines itself as a broad partnership among lay, religious and clergy "to promote best practices and accountability in the management, finances, communications, and human resource development of the Catholic Church in the U.S., including greater incorporation of the expertise of the laity." That ambitious effort was conceived amid crisis and continues to be propelled along the crisis narrative, which began as one of sexual abuse and has metastasized into a diagnosis of failed leadership at every level of the church, from rectory to papal palace.

In one sense, it is remarkable that it has taken the church at large, the people of God, nearly 40 years since the scandal story first broke in the United States, to arrive at this point. It is even more noteworthy that we have arrived at this point where an organization of laypeople can fill a hotel ballroom in the nation's capital with this mix of people, including representatives of the hierarchical culture, for a day and a half of uncensored and frank dialogue about the mess we're in and the serious damage that's been done.

The most recent driver of the crisis narrative was the summer of 2018. A critical mass developed with the release of the Pennsylvania grand jury report and the revelations about Theodore McCarrick that could no longer be denied or overlooked. A favorite cardinal of an elite level of Catholic — those involved in big institutional efforts that depended on the funding he could attract — came tumbling down. It was also the year Pope Francis faltered badly in understanding the situation in Chile but quickly came to understand the dimensions of the corruption, issued a public apology, and began to speak and act as no pope previously.

All of that is sad validation of the essential role the Leadership Roundtable plays in this moment of church history, a non-ideological, broadly based organization able to pull into the discussion folks from a lot of spots around the Catholic community. If it had not existed in 2018, someone would have had to invent it. It brings a much-needed dose of reality to this all-too human and flawed institution. 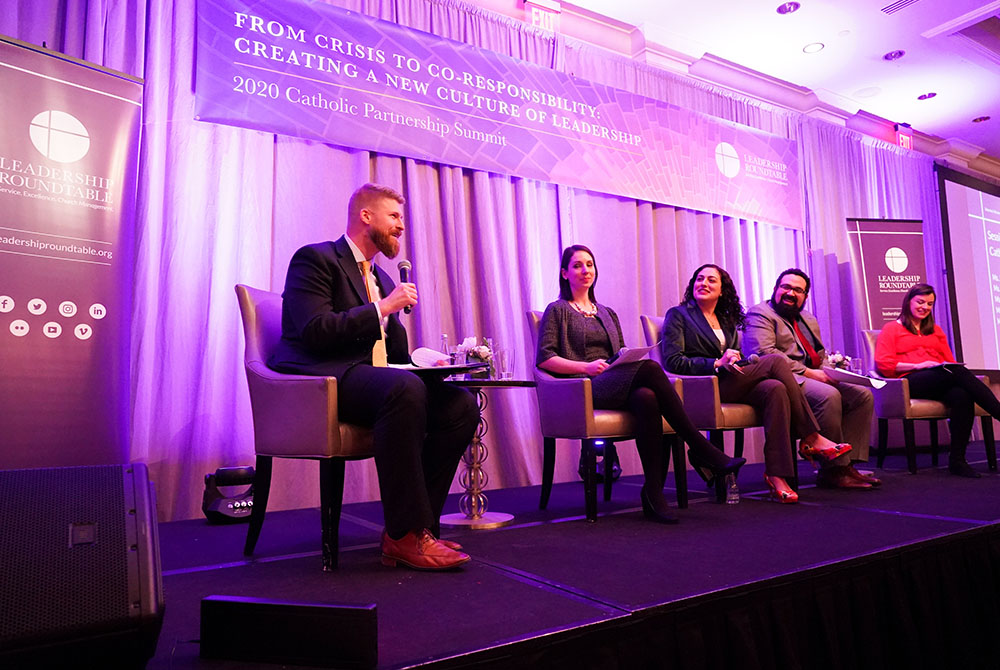 Jonathan Lewis, assistant secretary for Pastoral Ministry and Social Concerns of the Archdiocese of Washington (pictured far left) serves as moderator for the panel "A Culture with Young Adult Catholics at the Leadership Table." Pictured from left: Jennifer Baugh, national executive director of Young Catholic Professionals; Nicole Perone, archdiocesan director of Adult Faith Formation of the Archdiocese of Hartford; Darius Villalobos, director of Diversity and Inclusion of the National Federation for Catholic Youth Ministry, and Katie Diller Gleason, director of campus ministry of the Lansing, Michigan, Diocese. (Ralph Alswang)

My perspective at my first Leadership Roundtable event was largely limited to the content of the panels, the discussion of those panels at one table and some conversations around the edges.

Among the impressions I took away:

The most significant initiative I detected and one that I hope becomes a full-blown topic for discussion in the future, was one that got beneath the surface of all the pressing and essential institutional adjustments talked about to the level that moves from change to transformation.

Zinn spoke most openly about it, especially about the need for transformed relationships, and she elaborated on her thoughts in a separate interview.

This space in the past year has dealt a great deal with clericalism, hierarchicalism and has paid special attention to Jesuit Fr. James Keenan's work on vulnerability, the capacity to empathize with another, as missing in the hierarchical culture.

I strongly believe that Zinn, Scicluna and Keenan are onto something profound — an understanding that the abuse crisis, horrific at every level, is but a symptom of deeper maladies that are systemic. Humility, honestly confronting the past without being forced and going through the pain of transforming relationships within the institution, are key to that essential transformation. Change will follow.

A version of this story appeared in the March 20-April 2, 2020 print issue under the headline: Leadership Roundtable's dose of reality.