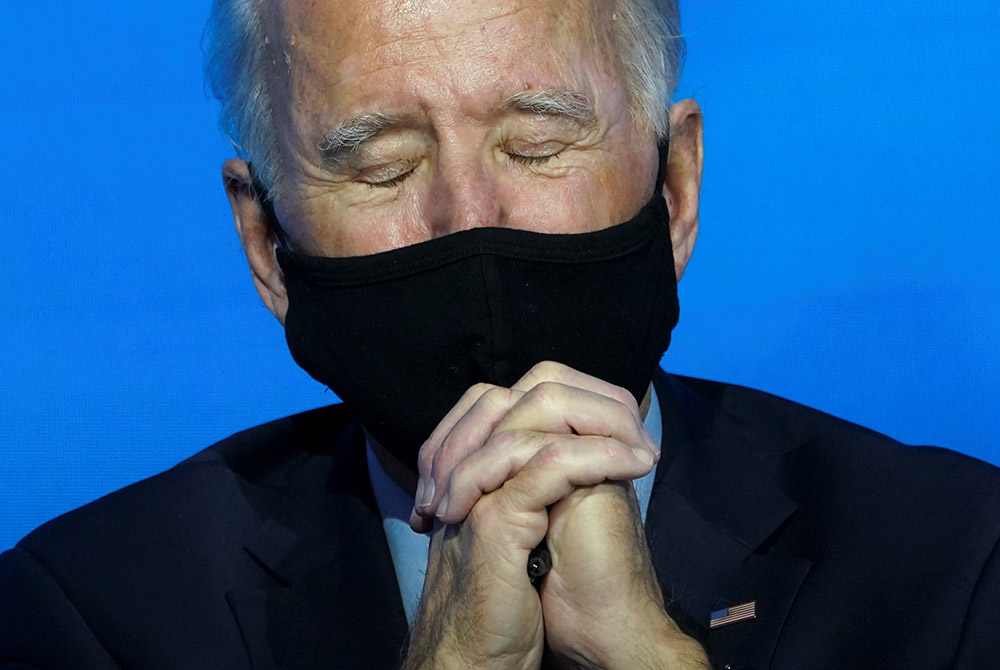 The drive from President-elect Joe Biden's home in Greenville, Delaware, to his parish of St. Joseph on the Brandywine takes all of about three minutes.

During the 2020 election, reporters became quickly familiar with the 0.6 mile trek to the church, where Biden would regularly attend Mass on Sundays (or occasionally the vigil Mass on Saturday night), where he began his morning on Election Day and, more recently, where he was in attendance for the feast of the Immaculate Conception on Dec. 8.

Biden is often photographed exiting the church with a bulletin in hand, occasionally making small talk with parishioners and, almost always, stopping at the church cemetery where his first wife, Neilia, daughter Naomi and son, Beau, are buried. 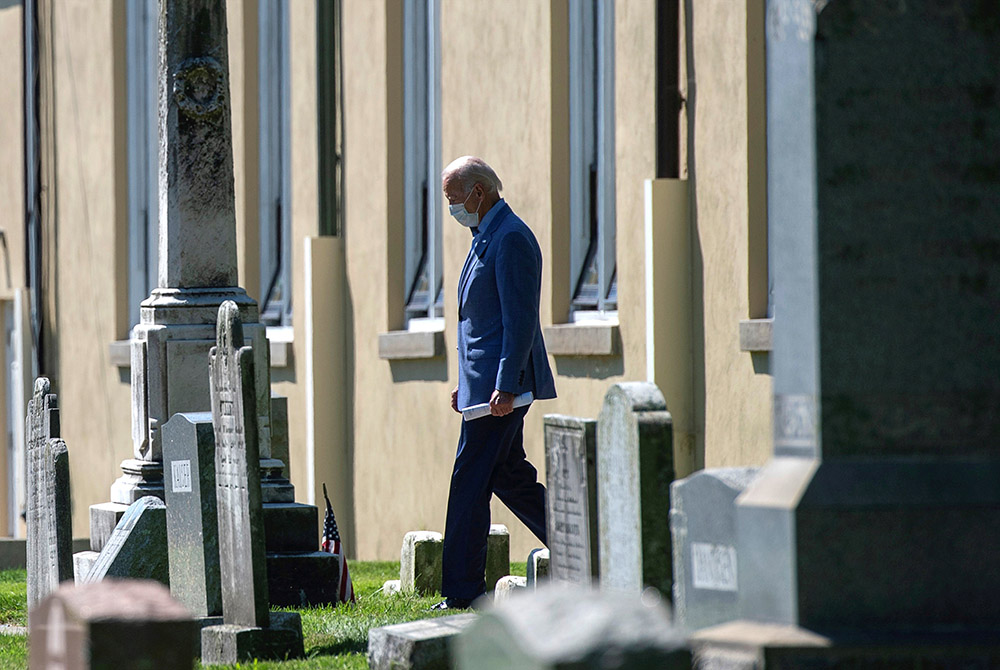 Next month, when the president-elect changes addresses, he'll face a decision that many first families have faced: where to attend church?

In recent decades, church attendance has been a closely watched and delicate matter for the commander in chief. Despite a base of evangelical voters, President Donald Trump spent most Sundays on the golf course. President Barack Obama never had a home church while living in Washington, D.C., and President George W. Bush's church preference was at Camp David's chapel with military service members. President Bill Clinton, however, was a regular at Foundry Methodist Church and President Jimmy Carter attended and even taught Sunday school at First Baptist Church of D.C.

Yet as the nation's second Catholic president, as part of a faith that teaches there is a Sunday obligation to attend Mass, and as a candidate and now president-elect that has shown he's taken it seriously, Biden will have a range of options.

Christina Cox, author of the book Catholics in Washington, D.C., said that when John F. Kennedy was elected the first Catholic president in 1960, he made his decision with one major consideration in mind: location.

"He didn't want to go too far from the White House," Cox told NCR, noting that Kennedy didn't just attend Mass on Sunday but would periodically attend during the week.

While Kennedy did attend Mass at St. Matthew's Cathedral, Cox said that he was more at home at St. Stephen Martyr in Foggy Bottom, where he received less attention than he did at the downtown cathedral, and for that reason, the Secret Service also preferred St. Stephen's. 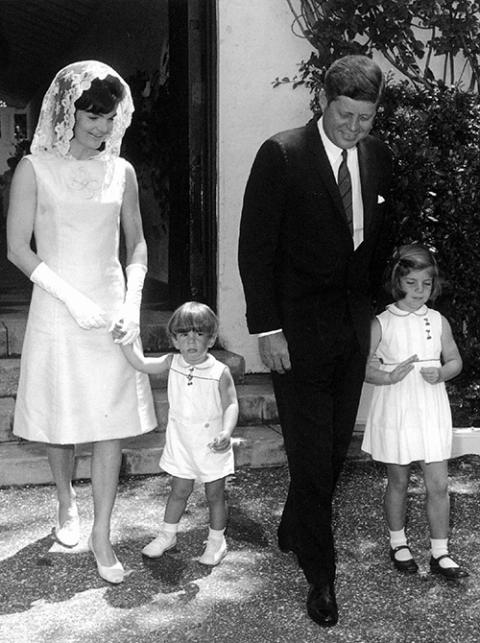 U.S. President John F. Kennedy, his wife, Jacqueline, and their children, Caroline and John Jr., are seen on Easter Sunday in 1963. (CNS/Reuters)

Today, a plaque commemorates the seventh pew from the back, on the right, in which the Kennedy family would sit. "He didn't sit too close to the front in case he needed to make a beeline out," said Cox.

When Kennedy was assassinated in 1963, his funeral Mass was held at St. Matthew's. Cox said that while the Basilica of the National Shrine of the Immaculate Conception, the largest Catholic in church in North America, had been offered to the Kennedy family for the occasion, First Lady Jackie declined because she wanted to walk from the White House to the cathedral in procession with the coffin.

It was outside St. Matthew's where the iconic photo of JFK Jr. saluting his father's casket was taken, and for many Americans why the cathedral has come to be associated with the Kennedy family.

Fr. John Hurley, a current priest in residence at the cathedral, told NCR that if Biden would like to follow in that tradition of attending Mass there as president, he would be more than welcome.

"The president-elect is certainly welcome. Everybody is," said Hurley. Like his archbishop, Cardinal Wilton Gregory, Hurley resists the idea that Biden should be denied Communion because of his support for legal abortion, and also notes that Biden has attended previously Masses there in the past, "so he knows the cathedral."

Named in honor of St. Matthew, the patron saint of civil servants, the cathedral is used to many Catholic politicians showing up for Masses, "often arriving late and leaving early," Hurley said. In fact, in July, that's how Biden's current pastor in Delaware, Msgr. Joseph Rebman, described Biden's Mass attendance practices to NCR.

"Once you're president, that changes," Hurley noted, saying that there will likely be a need for security sweeps of the cathedral before Biden could enter its premises. Yet he also said the cathedral is prepared for that, since it hosts the annual Red Mass at the start of the Supreme Court term each fall.

"The justices are escorted out first before the rest of the congregation for security reasons," he said.

While the White House is technically within the parish boundaries of St. Matthew's, Hurley said that Biden, like a lot of Catholics these days, might look for a place outside of the geographical boundaries of their parish.

For a president who has prioritized racial reconciliation and spent a lot of time on the campaign trail with African American Christian leaders, he could choose to venture up to St. Augustine Catholic Church, a vibrant congregation long known as a center of Black Catholic worship.

Or, given Biden's longtime close association with Jesuits, he could also decide to attend Holy Trinity Catholic Church in Georgetown, where he occasionally attended Mass as vice president, and where the parish has long been a favorite of politicians.

Jesuit Fr. Kevin Gillespie, pastor of Holy Trinity, told NCR that the parish dates back to the 18th century, and while President George Washington never attended a Mass there, a special Mass was held after his death in 1799. President Abraham Lincoln once attended a funeral at the parish and, more recently, it's been home to politicians on both sides of the political aisle. 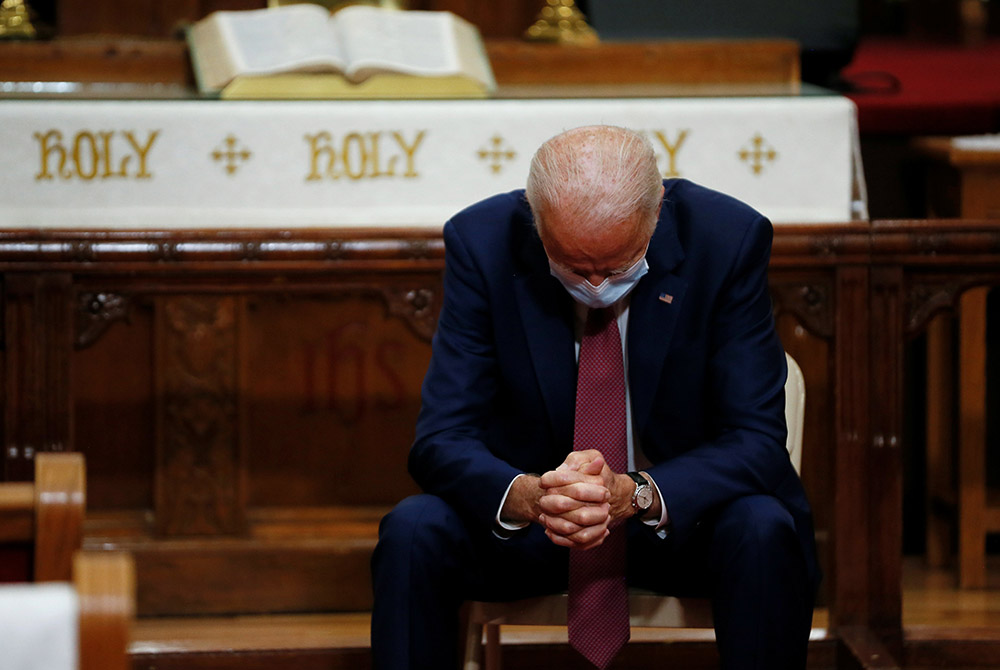 Gillespie said that some of Biden's grandchildren received their first sacraments at the parish and that the church has a photo of Biden posing with the parish school children with ashes on his forehead after an Ash Wednesday service when he was vice president.

"Our mission is that we're a parish that welcomes all, to accompany one another in Christ, celebrate God's love and transform life. That's our mission statement," said Gillespie, "and he's more than welcome here."

"We preach justice, but we don't preach policy," he added.

Yet if Biden, who is said to frequently turn to prayer, decides to sneak out of the White House for a quick weekday Mass, his closest option is not a church, but rather, the Catholic Information Center on K Street, an Opus Dei-affiliated bookstore and chapel, which boasts of having the "closest tabernacle to the White House."

Should he choose to show up there, he may run into Attorney General William Barr, who once served on its board, or President Donald Trump's Supreme Court whisperer Leonard Leo, who is a current board member — which could take on added significance when it came time to offer the sign of peace.

A version of this story appeared in the Dec 25, 2020-Jan 7, 2021 print issue under the headline: Which Catholic church will Biden attend in DC?.