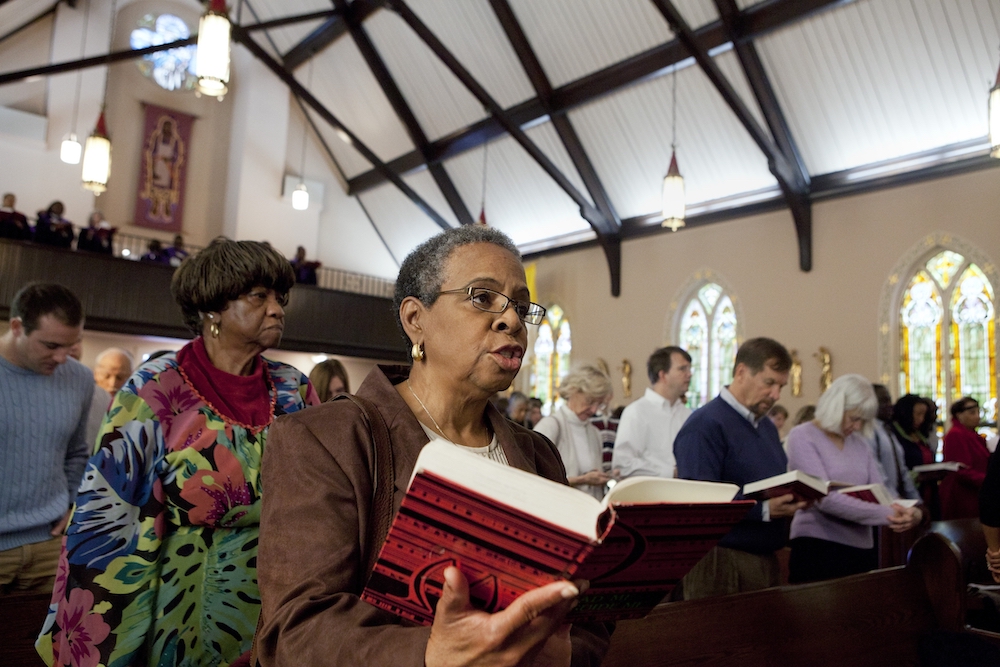 White Christians — including Catholics — in the U.S. have actively built and sustained white supremacy since before the nation's founding, constructing institutions and theologies that uphold racism to this day.

That's the central claim of Robert P. Jones' new book, White Too Long: The Legacy of White Supremacy in American Christianity, published in July. Jones is the CEO and founder of the Public Religion Research Institute and a scholar of religion and politics with a doctorate in religion from Emory University.

In a Sept. 9 online event hosted by Vanderbilt Divinity School, Jones, who is white, discussed his upbringing in a segregated Southern Baptist church, the role of white churches — Catholic and Protestant — in upholding white supremacy, and the need for white Christians to reckon with their history and help dismantle structural racism.

"White Christians have not just been complacent, nor just complicit," Jones said. "But rather, as the nation's dominant cultural power, we white Christians have constructed and sustained a project of perpetuating white supremacy that has really framed the entire American story, and … the legacy of this unholy union still lives in the of white Christianity today."

Jones recounted the history of white supremacy in the church. Prior to the Reformation, Catholic theologians concocted the "doctrine of discovery" that said white Christians had a divine mandate to occupy lands that were not "Christian," which legitimized centuries of colonization, enslavement and genocide against indigenous people in places such as the Americas, Africa and Asia. This doctrine was enshrined in a papal bull issued by Pope Alexander VI in 1493.

Later, during the 18th century and the first half of the 19th, slaveholders in the U.S. twisted biblical stories to suggest that Black people were inferior, while simultaneously claiming enslaving Black people was their Christian duty. They also brought enslaved people to church with them, forcing them to sit in the back or in specially-constructed galleries separate from white worshippers.

"What kind of Gospel could be preached in that setting, what kind of liturgy could get practiced, what kind of hymns could get sung?" Jones asked, referring to the churches enslaved people and their enslavers attended together. "Then you really see that from the very beginning, white Christianity developed around this a priori commitment to a white supremacist status quo, and that that has carried forward for us."

Recounting statistics from his book, Jones said in a Catholic census in Maryland conducted in the late 1700s, one-fifth of those counted were enslaved people owned by white Catholics or Catholic institutions. After slavery ended, white churches began to exclude Black people and even used ushers as "bouncers" to discourage Black people from entering, Jones said. Catholic churches, even in states such as New York, refused entry to Black parishioners or would force them to sit in the back and receive Communion last, Jones said.

In 1968, the newly formed National Black Catholic Clergy Caucus said that "the Catholic Church in the U.S. is primarily a white racist institution, has addressed itself primarily to white society, and is definitely part of that society," Jones added.

"For nearly all of American history, the light-skinned Jesus that was conjured by most congregations was not just indifferent to the status quo of racial inequality," Jones said. "But that light-skinned Jesus demanded its defense and preservation as part of the natural, divinely-ordained order of things."

Churches are still highly segregated, Jones said. As of 2012, four-fifths of churches had a single racial or ethnic group that comprised 80% or more of the population, and 11% of churches were still 100% white, according to the Pew Research Center.

The study found white Catholics, for instance, were almost twice as likely (56%) as unaffiliated white people (30%) to believe police killings of Black people were isolated incidents rather than part of a pattern. (For white evangelical Protestants, it was 72%, and for white mainline Protestants, 52%.) 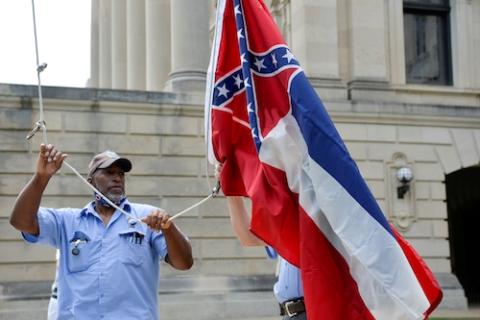 June 30, an employee at the Mississippi Capitol raises and lowers the former state flag, adopted in 1894 with the Confederate emblem. June 30, Mississippi Gov. Tate Reeves signed a bill into law to replace it. A commission reviewed about 3,000 design proposals and Sept. 2 selected one featuring the white magnolia flower. The issue is on the Nov. 3 ballot. (CNS/Reuters/Suzi Altman)

Jones said even when researchers control for other factors such as geography, political party and rural-urban split, they found Christian self-identification was still linked to racist attitudes among white people. Church attendance also doesn't help — white Catholics who frequently attended church, for instance, were no less likely to hold these attitudes than those who didn't.

In addition, Jones said, white Christians in many places are reluctant to engage with the history of white supremacy in the church. He said growing up, he attended church roughly five times a week and never once heard mention of racial justice.

"White Christians sort of let ourselves off the hook by saying it's silence or omission, but when you have a society that is already set up that way, silence is not just silence, silence is support," he said.

The challenge for white Christians today, Jones said, is to honestly tell this "barely-hidden" history, and begin to engage in a process of repair and justice. He cited a story about two Georgia churches, one Black and one white, separated by a street corner and a legacy of segregation, whose pastors had come together about seven years ago to commit themselves to building community and making amends for the past.

The pastors of these two churches realized that their churches had once been one church, one slaveholding whites used to bring enslaved people to by force. During that time, they discovered the church had sold Black people — members of their own congregation — to balance the books. Instead of hiding this fact out of shame, the white pastor preached about it in his sermon the next weekend, to gasps from the white parishioners, he said.

In the process of repair, he said, white Christians need to avoid rushing for forgiveness from their Black peers.

Seeking racial equity and justice, rather than immediate forgiveness, should be the goal, he added. He said white Christians need to listen to their Black peers and start to analyze the ways racism shows up in phenomena such as police brutality and the disproportionate impact of COVID-19 on Black and Latino communities.

"[We need] to take seriously … how disfiguring this commitment to white supremacy has been to us … by contorting ourselves around this commitment to white supremacy as a kind of fundamental thing that everything is built around and that can't be questioned," Jones said. "That has twisted and disfigured white Christian faith, churches and theology into things that are hardly recognizable from what the Gospels would intend them to be."