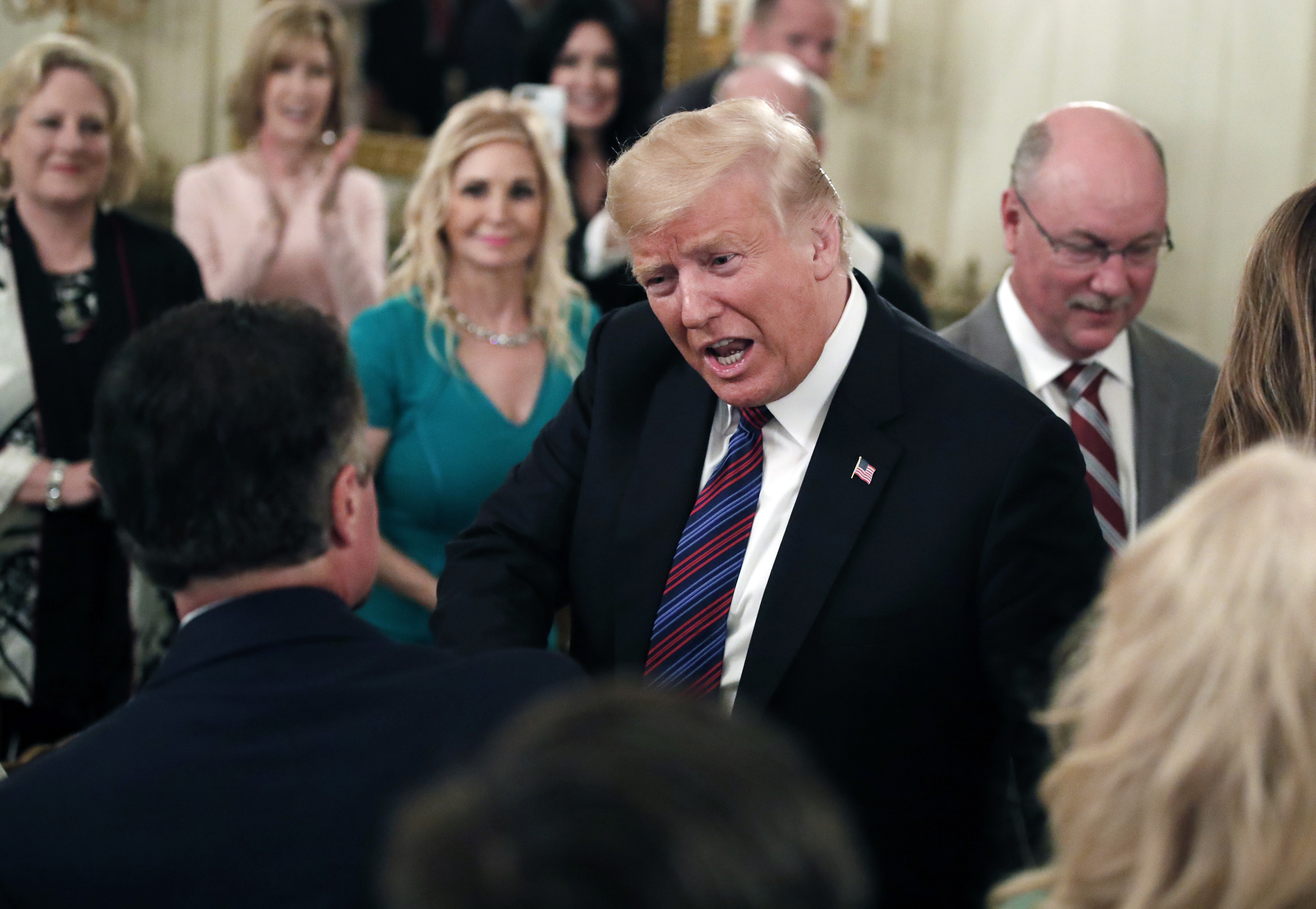 President Trump greets people as he arrives to speak during a dinner for evangelical leaders in the State Dining Room of the White House on Aug. 27, 2018, in Washington. (AP/Alex Brandon)

The White House hosted a dinner Aug. 27 for about 100 evangelical Christian leaders and senior-level officials, honoring evangelicals, as one participant explained, "for all the good work they do."

Calling America "a nation of believers," President Trump said at the event that they had gathered to "celebrate America's heritage of faith, family and freedom."

"As you know, in recent years the government tried to undermine religious freedom, but the attacks on communities of faith are over," the president said. "We've ended it. We've ended it. Unlike some before us, we are protecting your religious liberty."

Trump also took the opportunity to press evangelicals to turn out their supporters on Election Day later this year, according to an audio recording of the event leaked to The New York Times.

"I just ask you to go out and make sure all of your people vote," Trump told the crowd, according to the Times. "Because if they don't — it's Nov. 6 — if they don't vote we're going to have a miserable two years and we're going to have, frankly, a very hard period of time because then it just gets to be one election — you're one election away from losing everything you've got."

Trump then appeared to claim that if Democrats win, they "will overturn everything that we've done and they'll do it quickly and violently."

Attendees such as Paula White, a Florida pastor who serves as one of Trump's closest spiritual advisers, said the event followed an afternoon of meetings between the evangelical leaders and White House officials. Others said the agenda of those meetings included issues important to both the administration and conservative evangelicals, such as religious freedom, immigration reform, criminal justice and prison reform and judicial nominations.

White, who called the event a "beautiful, memorable evening," said, "Every table was hosted by a Cabinet member, senior adviser and — of course — the president and vice president had their own tables."

According to a tweet by Johnnie Moore, a public relations consultant who serves as the unofficial spokesman for an informal group of evangelicals who advise the president, invitations for the event were sent more than six weeks ago.

Nonetheless, coming after a week in which the president was buffeted by the conviction of his former campaign manager and a guilty plea by his personal attorney on federal charges, and as the White House attempted to control the damage over reports Trump quashed an official White House tribute after Sen. John McCain's death, the dinner provided a moment of praise for the president, who was repeatedly lauded by those who attended.

One participant, Robert Jeffress, senior pastor of First Baptist Dallas, described the event to Fox News as a "beautiful state dinner," and claimed it "almost turned into a campaign rally," with evangelicals in attendance spontaneously standing and speaking about why they support the president.

Faith & Freedom Coalition founder and Chairman Ralph Reed said evangelicals have a "tremendous amount of appreciation and gratitude" for Trump and his administration.

"There's a deep appreciation in the evangelical community for President Trump and his administration for making religious freedom, the sanctity of life, support for the state of Israel and many other public policy concerns such high priorities," he said.

That was echoed in a gift White reportedly presented to the president and first lady on behalf of the group: a Bible signed by more than 100 evangelicals and carrying the inscription, "We appreciate the price that you have paid to walk in the high calling. History will record the greatness that you have brought for generations."

The dinner's purpose appeared to be to take a victory lap for those key members of Trump's base concerned with certain definitions of religious liberty. In his remarks at the dinner, Trump reportedly listed what he saw as his administration's successes on faith issues, claiming among other things that he has "stopped" the Johnson Amendment, which prevented churches from promoting political candidates, though the executive order he signed last year does not do that; repealing the Johnson Amendment would take an act of Congress.

(Trump also did not mention various ongoing threats to nonevangelical faith communities in the United States. In May, a man in Florida was arrested on a charge of making a bomb threat against a South Florida mosque, according to federal prosecutors.)

Trump ended his remarks by telling attendees, "The support you've given me has been incredible, but I really don't feel guilty because I have given you a lot back — just about everything I promised, and, as one of our great pastors just said, 'Actually, you've given us much more, sir, than you've promised,' and I think that's true in many respects."

Among the more notable attendees was J.D. Greear, the new president of the Southern Baptist Convention, who has vowed to distance the denomination from politics. In June, when Pence spoke at the SBC's annual meeting, Greear tweeted that the address sent "a terribly mixed signal," adding that "commissioned missionaries, not political platforms, are what we do."

He tweeted again after Monday's dinner that while he had accepted the invitation and "witness in the public square requires some presence in it," he remains "just as committed as ever to decoupling the church from partisan politics."

Greear tweeted that he did not sign the gift Bible, saying he wasn't asked or aware it was being presented.

While attendees tweeted smiling selfies from the dinner, other evangelicals took them to task on Twitter for their uncritical support for the president.

Historian John Fea, author of "Believe Me: The Evangelical Road to Donald Trump," refers to Trump's prominent evangelical backers as "court evangelicals." He wrote a blog post Monday night suggesting attendees read the biblical accounts of the prophet Nathan, who, after sharing a story about a rich man who took everything a poor man had, called out King David, "You are the man."

"Will there be a Nathan in the room tonight?" Fea wrote. "Somehow I doubt it."