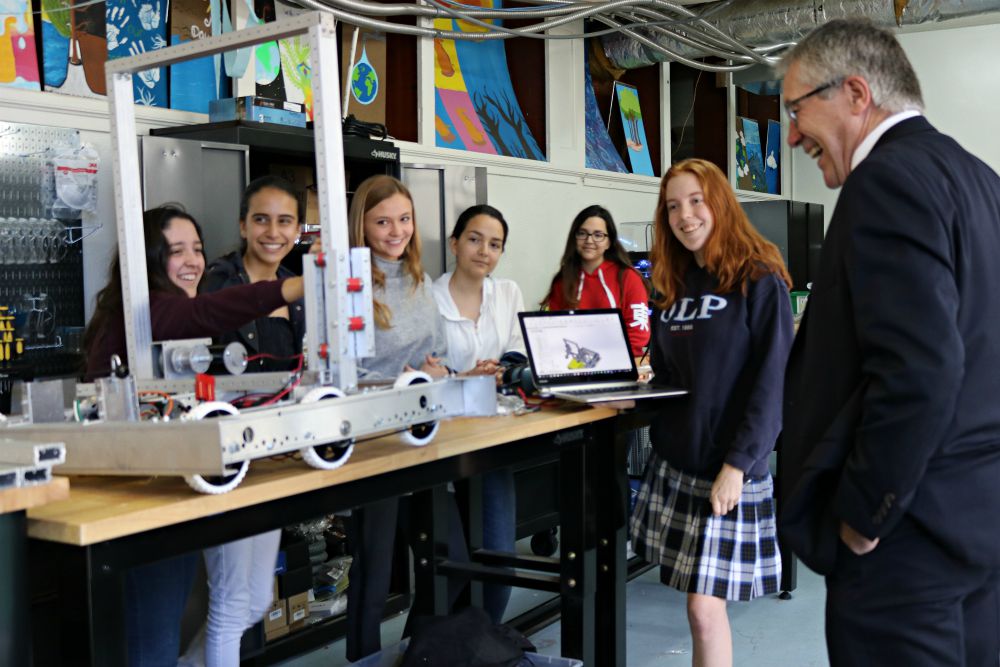 "Did the all-boys school build your robot for you?"

The question was one of many fielded by the students from the Academy of Our Lady of Peace, an all-girls Catholic high school in San Diego, during their debut at the FIRST Robotics San Diego Regional Competition in March.

Of the 66 teams there, the Our Lady of Peace Pilots was the competition's lone, and first, all-female team.

At the regional event, one of 63 around the country, the Pilots took home the Rookie All Star Award, which qualified them for high school robotics' highest level tournament, the FIRST Championship in Houston the following month. They also received the Matt Grob Innovation Award, which included $10,000 to help fund travel and competition costs.

As to the question of who built their robot, the 14 young women proudly responded, to the surprise of some, it was they who did the designing, coding and engineering, who ran the tests and simulations, and who operated the power tools in piecing together the parts that brought "Debbie" to life.

While the Pilots didn't qualify for the playoffs round in Houston (though they finished 25th out of 68 teams in their subdivision), they still left quite the impression at both competitions.

The reaction from fellow competitors and spectators "left us speechless," said Camila Tirado, a senior and president of the Pilots robotic team.

She described how girls, both young and other teens, came up to them at the San Diego regional to "congratulate us and cheer us up." After one match, a father approached Tirado, 18, and thanked the team for inspiring his two young daughters who he shared aspire to be like the Pilots one day.

"To me these responses made it all worth it, not because we got a lot of attention, but because people were moved by what women in STEM can achieve when they come together," she told NCR.

Since 2013, Our Lady of Peace has placed a strong emphasis on developing its curriculum in STEM courses: science, technology, engineering and mathematics. The focus aligned with the arrival of Lauren Lek that year as head of school and the first lay leader in its 136-year history. Beforehand, the high school offered science courses, "but they were not robust," Lek said.

In quick time, Our Lady of Peace grew its STEM elective courses, and in 2015 created a STEM certificate program. With 59 students enrolled this past academic year, the program requires students to take math and science courses all four years, along with at least two STEM electives in the upper grades; in addition, each year they maintain a STEM portfolio, participate in one of its STEM clubs and hold a STEM-related internship beginning with their sophomore year. As seniors they present a final project to a panel.

Roughly 40 percent of Our Lady of Peace graduates are pursuing STEM majors in college — compared to the national co-ed average of 16 percent. That includes Tirado, who in the fall will attend Syracuse University where she plans to major in biotechnology and minor in French. She was among the first 18 students to complete the STEM certificate program this spring.

"It's exciting to see the girls' passion for this and what they're pursuing and where they're taking it," Lek said. 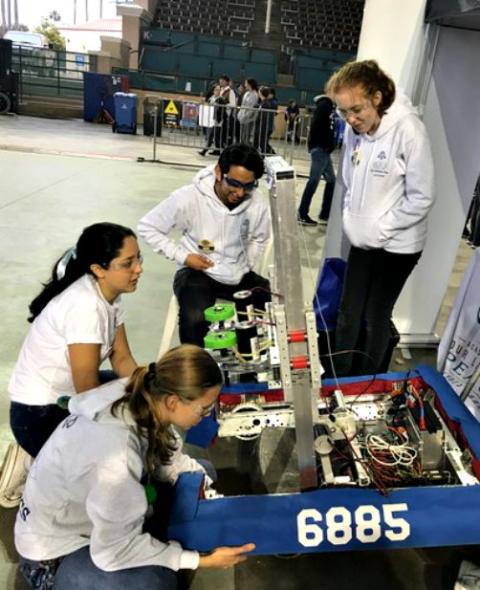 Pilot team members work on "Debbie" at the FIRST Robotics San Diego Regional Competition in March. (Academy of Our Lady of Peace)

Part of the push to increase the school's STEM academics comes from a desire to ensure the young women have the same opportunities as their male peers, not just in the classroom but in their professions.

As it stands now, when it comes to careers in STEM, there are just fewer women.

A November report from the U.S. Department of Commerce concluded that despite gains elsewhere in the economy, women "remain underrepresented in STEM jobs" and related degrees. In 2015, women held nearly half the jobs in the nation, but just a quarter of those in STEM fields. The same percentages largely held when looking at college-educated women.

While women nearly match men in total undergraduate degrees earned, they represent just 30 percent of all STEM degree holders. And for women in STEM occupations, they're more likely to be in physical or life sciences than engineering or computer science, the latter encapsulating some of the fastest growing professions in the U.S., such as software developers, statisticians and research analysts. The U.S. Department of Commerce study also found that wage discrepancy between men and women shrinks slightly in STEM careers.

Closing the STEM gap starts with introducing girls at a young age to the possibilities, Lek said. Providing hands-on experiences, having role models and hearing others' stories are all important components she pointed to as getting girls to see themselves in STEM roles.

At Our Lady of Peace's annual women's symposium, area female leaders from a variety of professions, not just STEM, share their stories with students and show what's possible for them, too. The school has also partnered with nearby Catholic schools to introduce other students, boys and girls alike, to coding and computer design.

Meet the Pilot robotics team from the Academy of Our Lady of Peace, YouTube video

While not every student will ultimately choose a career in STEM, Lek said the idea is to equip students with the knowledge — and comfort — with such subjects, and to realize how those skills are essential in so many industries and professions today, whether in business, law or media.

"I want them to at least have considered it as an option," Lek said. "And I can't tell you how many girls have gotten into computer programming classes or into robotics, and they said, 'I never thought of pursuing this, but now I want to go and become a mechanical engineer or a civil engineer,' or 'I'm really excited now about computer programming and what that means.' "

Around the same time Our Lady of Peace overhauled its STEM curricula, it also launched its robotics and engineering club, and along with it its robotics team. This year, they entered the FIRST Robotics Competition — one of several programs sponsored by FIRST, a non-profit focused on cultivating young people's interest in science and technology.

For this year's competition, "Power Up," teams were tasked to build robots capable of moving and positioning "power cubes" around an arena, fashioned after an 8-bit video game, in an effort to score points, "defeat the boss" and win the match. In each round, teams had to have their bots perform pre-programmed moves before taking the controls to help their three-team alliance rack up as many points as possible.

Tirado called the team's time in Houston "an amazing learning experience," not just from their matches but also in seeing how other teams ran their robotics programs.

To prepare for the competition, the Pilots spent the first part of the school year learning coding and practicing using computer-aided design (CAD) software. Guiding them were three mentors, including Johnathan Chittuluru, chair of Our Lady of Peace's STEM department. Once the competition officially began in January, they had six weeks to create their robot.

The Pilots pose at the FIRST Robotics San Diego Regional Competition in March, where they were the only — and first — all-female team. (Academy of Our Lady of Peace)

Between the regional and world competitions, the Pilots identified that their robot's arms needed to be longer to place cubes on higher platforms. Rules restrict teams from working on their bots in between competitions, leaving only a small window for adjustments before the next matches. That meant the girls had to develop prototypes and run simulations to find a way to give "Debbie" that extra reach.

As for the robot's name, the girls opted for "Debbie" after Debra Fitzgerald Simmons, the director of observatory systems and engineering for the James Webb Space Telescope — the successor at NASA to the Hubble Telescope in exploring the cosmos. After their trip to Houston, the team met with Simmons to share their experience.

"Balancing her important job and being a mother, she is the embodiment of a successful woman in STEM," Tirado said, adding the Pilots have decided to begin a new tradition of naming their future bots after other inspirational women in STEM industries.

In terms of next steps, Our Lady of Peace plans to continue to grow its STEM offerings through increased partnerships with local companies — already among them Illumina, Pfizer and Qualcomm — in addition to developing genetics, biotechnology and environmental sciences curricula, and presenting opportunities for students to conduct their own research.

As they look forward, they also look back, drawing purpose for the school's focus on technology from its founding congregation, the Sisters of St. Joseph of Carondelet.

Lek loves to tell the story of the order's roots, dating to southern France in 1650 at a time when few women religious lived outside the convent, for lack of permission or finances or both. But the order's six founders did just that, in the small village of Le Puy, thanks to their abilities in lacemaking, what Lek describes as "one of the highest technological skills at the time." Lacemaking not only supported the order and provided income for their ministry, but the sisters taught the skill to other women as a way to lift them out of poverty.

In a way, lace serves as an unofficial symbol for Our Lady of Peace.

"We have lace throughout the buildings, and when we ask the students, they know what that means," Lek said. "Lace means technology. It means skillset. It means an education. It means the future."