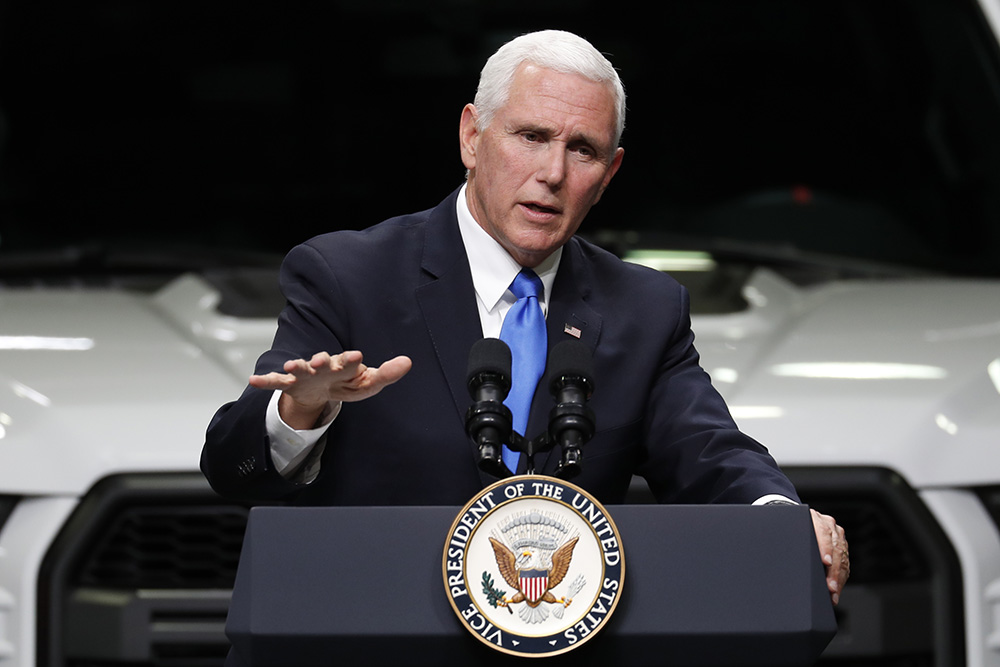 Like most Americans, students at Taylor University have strong feelings about President Trump and his vice president, Mike Pence, as well as the relationship between religion and politics.

So when news broke last month that Pence would speak at Taylor's upcoming commencement, reactions were mixed.

Some students love the decision. Some hate it.

Others see the whole thing as divisive, according to students discussing the announcement in Professor Alan Blanchard's Advanced Media Writing class April 16 at Taylor.

"I think that for years we have been in a school that's very open to conversation, and I think the last couple of months — last year — has just kind of been a battle for who's right," said Lexie Lake, a senior in the class.

The controversy over Pence's visit is not the only recent disagreement at Taylor.

Earlier this year, a Taylor professor started a petition against a planned Starbucks on campus because of its "stands on the sanctity of life and human sexuality." And last year, an anonymous conservative publication popped up on campus with complaints the school had become too liberal.

Like so much of evangelicalism in the United States, the Christian liberal arts school — which always has prided itself on welcoming diverse Christian perspectives — has in recent years found itself engaged in a battle for the soul of the movement.

Taylor University describes itself on its website as a nondenominational Christian school that "encourages students to ask hard questions" on its picturesque campus surrounded by Indiana cornfields.

Its 2,000 students are required to sign a "Life Together Covenant" largely upholding a conservative evangelical view of Christianity. Among other things, the school prohibits alcohol and tobacco use, "homosexual behavior," premarital sex and social dancing outside of school-sanctioned dances.

Taylor's approach seems popular among evangelicals. The school recently tied with Calvin College in Grand Rapids, Mich., for the No. 1 regional college in the Midwest in U.S. News and World Report's 2019 rankings.

John Fea — a professor of American history at Messiah College and author of the book "Believe Me: The Evangelical Road to Donald Trump" who spoke at Taylor in October — described the school as "warmly evangelical."

Fea said Taylor never has been known as a political place in the same way as much larger evangelical school Liberty University in Lynchburg, Va., where President Jerry Falwell Jr. is a vocal supporter of Trump. Even Wheaton College, the flagship evangelical school in Wheaton, Ill., is more political than Taylor.

But schools like Taylor, which might have taken a live and let live approach to politics in the past, now may feel like they have to take sides, according to the historian.

"People have always debated the meaning of what an evangelical is or what an evangelical college might look like," he said. "But I think the election of Donald Trump certainly kind of exacerbated or enhanced these issues and put them now much more on the front of the identity agenda that Christian colleges are having to deal with."

A number of Christian colleges have made headlines since the 2016 election campaign for controversies stemming from conservative and progressive divides in both theology and politics. Oftentimes, their students hold more progressive views than their parents or donors.

That was the case at Azusa Pacific University in Azusa, Calif., which announced in 2018 it would remove a clause from its student code of conduct that prohibited same-sex romantic relationships. Students applauded the decision, while some of the school's board members and supporters objected. The school first reinstated its ban on same-sex relationships, then lifted that ban this spring, according to published reports.

A week after the April 11 announcement that Pence will speak at commencement, it still dominated news on Taylor's campus, about an hour and a half northeast of Indianapolis.

Newspaper racks in campus buildings carried headlines about the controversy on the front page of The Echo, the student newspaper. And a lighthearted publication called Click Bait, published by a student group known as the Integration of Faith & Culture Cabinet, landed on tables in the student center with the satirical headline "Pence Security Team to Build Wall Around Commencement Stage."

Faculty approved a motion 61-49 dissenting to Pence's invitation after Taylor President P. Lowell Haines announced the commencement speaker at a faculty meeting, according to an account in The Echo. 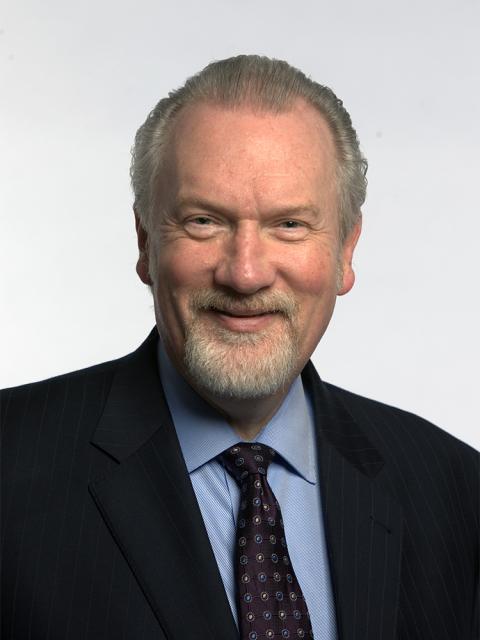 Not long after an email went out from the school announcing Pence's visit, another email landed in students' inboxes, inviting them to three listening sessions hosted by the school where they could make their feelings heard about the choice.

In an email last week to the campus community that was provided to Religion News Service, Haines said that when he was presented with the opportunity to have Pence speak at the school's commencement, he pursued it with "the best of intentions."

He acknowledged some have been offended by the selection and said the school is working with faculty, staff and student leaders to make sure the May 18 commencement ceremony honors everyone in attendance — including the vice president.

"I pray that over time, we will be able to overcome this current, deeply emotional challenge in a manner that reflects God's desire that we show love and grace when confronted with conflict in life," he wrote in his message addressed to the "Taylor Family."

"We have always been a community that, while deeply and firmly grounded in our Christian faith, celebrates what is unique about each individual and encourages diversity of thought and personhood," Haines said.

Haines did not respond to requests for an interview by RNS.

The school has heard feedback from people both supportive of and opposed to its decision to invite Pence, according to James Garringer, Taylor's director of media relations.

"Taylor University is an intentional Christian community that strives to encourage positive, respectful and meaningful dialogue. We look forward to hosting the Vice President next month," Garringer said in a written statement to RNS.

Professor Jim Spiegel, who teaches philosophy and religion at Taylor, authored the petition against Starbucks' coming to Taylor and said he was one of the authors of the anonymous conservative newsletter.

He said the headlines recent controversies have drawn are "certainly new and somewhat surprising for Taylor." 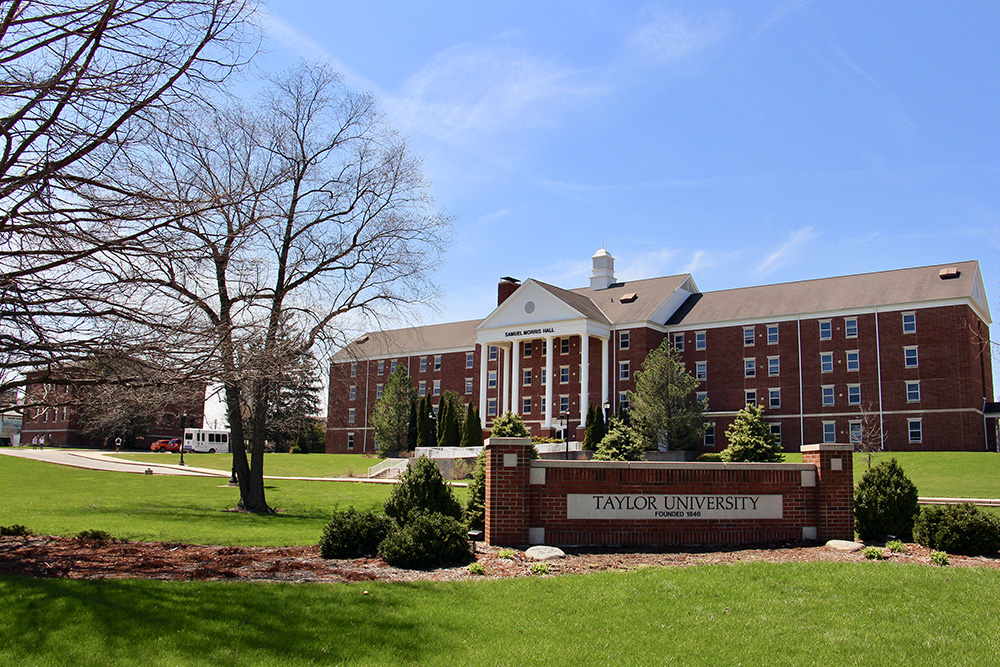 "We don't have a significant history of being politically vocal and active," he said.

Sam Jones — a sophomore at Taylor who grew up in a conservative, nondenominational Christian family in Wheaton, Ill., and now attends a charismatic church near the school — is looking forward to Pence's visit.

Jones said he and his roommate started a Change.org petition supporting Pence as commencement speaker.

As of Thursday (May 2), more than 5,900 people had signed onto their petition, which argued that people in positions of power should be respected and welcomed on campus and that the university wasn't aligning itself with Pence by inviting him, but rather "simply giving a voice to all opinions and planes of thought."

"Inviting Vice President Pence to Taylor University and giving him a coveted platform for his political views makes our alumni, faculty, staff and current students complicit in the Trump-Pence Administration's policies, which we believe are not consistent with the Christian ethic of love we hold dear," reads the petition, which was started by a 2007 Taylor graduate.

If Democrat Joe Biden were invited to speak at commencement when he was vice president, Jones told RNS, he'd be just as excited.

"For Taylor to have that opportunity — a school of 2,000 kids in the middle of a cornfield — is incredible," he said.

In the two years Jones has been at Taylor, he said, political conversations have often become tense and divisive.

"I think, as a university, this is the place where you need to have all sorts of different opinions because people are here to learn," he said. "We're not here because we have everything figured out. We're here to learn new things from new people." 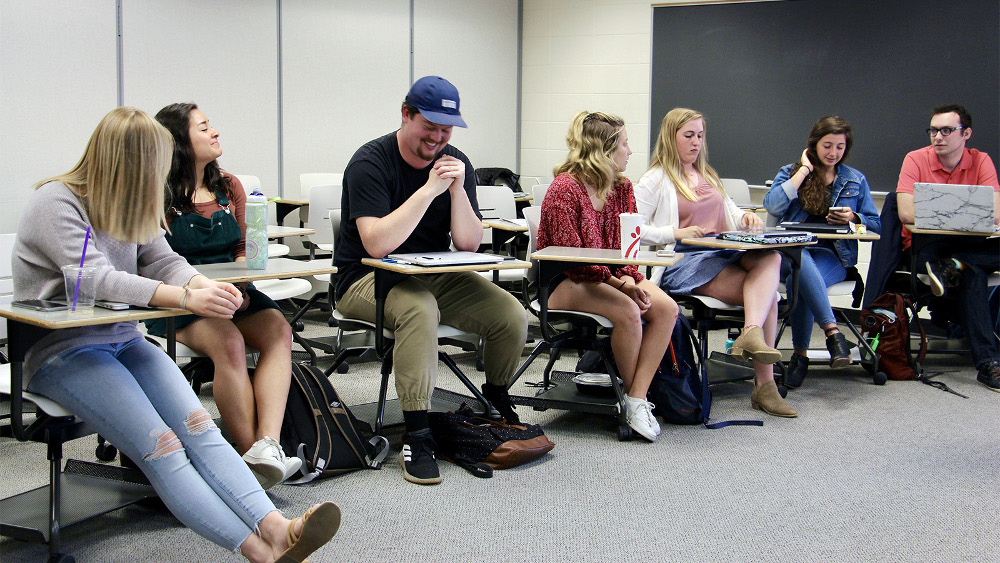 Rogers, the junior, also agrees that it is important to listen to all the voices on campus. And she wishes she could be excited about the sitting vice president visiting her school, too, she said.

But Rogers — who is from Fort Lauderdale, Fla., and attends an Episcopal church near the school — said she has a hard time squaring Pence's stances toward LGBTQ rights with Christianity's call to love. She worries about the message his appearance sends to students and their families coming to commencement from outside the U.S., given the Trump administration's stances on immigration and refugee admissions.

She pointed to a statement by Haines in the school's announcement that suggests to her Taylor's invitation indicates support for Pence and his policies: "Mr. Pence has been a good friend to the University over many years, and is a Christian brother whose life and values have exemplified what we strive to instill in our graduates."

Inviting Pence seems out of character for the university she's grown to love, said Rogers.

"Taylor has never really taken a stance on politics, and we're a nondenominational school so we don't even take a stance on a denomination," she said.

"So this is just them very clearly stating what they believe and what they're for, which has never really been said before. I think a lot of people are taken aback by that."

Blanchard, who teaches journalism at Taylor, said the controversy on campus is a "teachable moment."

At the faculty meeting discussing Pence's invitation, Blanchard said he argued that administrators, faculty and students should allow people to speak at the school with whom they disagree a little — or a lot. They should be able to talk about those things on which they disagree and still, at the end of the day, "honor God's two greatest commandments: Love God with all your heart and love your neighbor as yourself."

He's discussed the upcoming commencement speech with all his journalism classes — even asking them to write letters to the editor about their feelings about the vice president's visit.

"I think — not just for journalism students or professional journalists — I think we all benefit when we listen to people with different viewpoints and different ideas," he said.