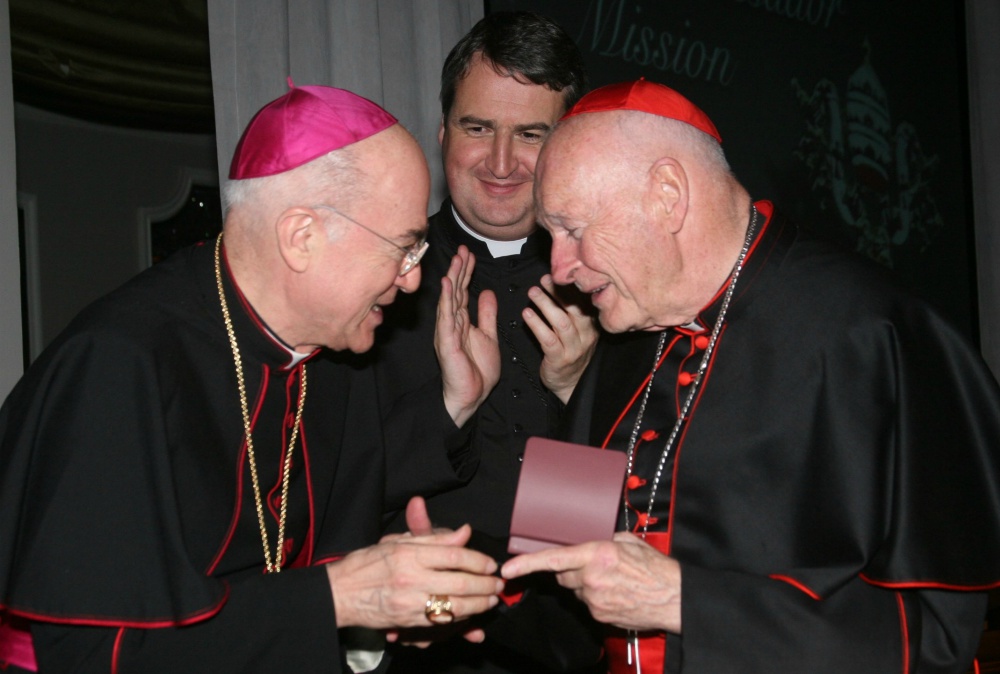 Archbishop Carlo Maria Viganò, left, congratulates then-Cardinal Theodore McCarrick at a gala dinner sponsored by the Pontifical Missions Societies in New York in May 2012. Oblate Fr. Andrew Small, center, director of the societies, said Viganò never tried to dissuade him from honoring the cardinal at the gala. (CNS/PMS/Michael Rogel)

Archbishop Carlo Maria Viganò has long charged that Pope Francis failed to rein in former Cardinal Theodore McCarrick, but the Nov. 9 release of the 450-page report into the former archbishop of Washington's career suggests that it now may be Viganò who could be subject to discipline for failing to follow Vatican instructions to investigate McCarrick.

"The report is only the facts, just putting things out there and indicating where pieces are missing," said Catholic University of America canon law professor Kurt Martens. "Now we have to look at what we do with that. One potential thing could be actually invoking Vos Estis and going after Viganò."

Martens told NCR that Vos Estis Lux Mundi, the Vatican's 2019 guidelines for investigating cases of abuse or cover-up by bishops, could be enacted against Viganò, the former papal nuncio to the United States, because the report reveals that he ignored a request from Cardinal Marc Ouellet, head of the Vatican's Congregation for Bishops, in 2012 to further investigate allegations against McCarrick.

"Clearly, Viganò did not do his job," said Martens.

Fast-forward to August 2018, when Viganò released an 11-page missive in which he accused Francis of knowing about McCarrick's past, ignoring allegations against him and failing to act.

"What he said about Francis protecting McCarrick is clearly untrue," Martens said. "Clearly, he had his facts wrong and he should have never accused Pope Francis."

Martens said that even as a bishop in the Vatican's diplomatic corps, Viganò could still be subject to a Vos Estis investigation for his failures and negligence.

John Carr, who worked as a top policy adviser for the U.S. bishops for a quarter century, told NCR that he hopes that the McCarrick report finally quashes any credibility that Viganò once possessed among certain members of the U.S. church.

"The report, together with Vigano's recent rantings, should once and for all get those bishops essentially taking his word over Pope Francis' word to own up to their mistake," he said, referencing a series of statements from Viganò over the past two years, in which he has alleged that a deep state exists within both the United States and the Catholic Church.

Although much of Viganò's original August 2018 testimonial was discredited soon after its release, he has continually been propped up by right-wing Catholic media and certain clerics. More than a dozen U.S. bishops had once attested to his character.

Carr said he believes this report delivers a final verdict on Viganò's reliability.

"For those who vouched for Viganò's integrity, this [McCarrick] report and his unbelievable missives, for their own credibility they ought to distance himself from the archbishop," said Carr.

Martens said Francis is the best example for dealing with Viganò: "He gives him the attention he deserves, which is nothing."

Martens was unsure whether other living members of the hierarchy could face potential action based on information in the McCarrick report. He noted that the report enumerates that three of the four bishops from New Jersey contacted by the Holy See failed to provide accurate information on what they knew about McCarrick, but these individuals — James McHugh, Vincent Breen, Edward Hughes and John M. Smith — are now deceased.

The report's revelations had some calling for greater transparency and accountability in the Vatican's method for selecting members of the hierarchy.

Mercy Sr. Sharon Euart, a noted canon lawyer who is the executive director of the Resource Center for Religious Institutes, told NCR that the questionnaire that is meant to provide feedback on potential bishop candidates "might be reviewed and expanded to include questions that would lead to understanding personal and behavior issues."

Eurart, who is also a former associate general secretary of the U.S. Conference of Catholic Bishops, said the process could be expanded to include more laypersons "who know the potential candidates professionally and personally."

Similarly, Martens noted that it isn't enough just to retool the process for selecting bishops, but that protocols must actually be followed by those involved in them.

"The problem remains that whatever vetting process you use, you have to use it. And then use the information that comes back to you and do further digging," he said, noting that with McCarrick, "there were clearly alarm bells there that should have gone off, but they didn't go off."

In the midst of discussions about next steps, however, the church should not forget that "the key point of this whole report" are the victims, said Jesuit Fr. Hans Zollner, a professor of psychology and president of the Center for Child Protection at the Pontifical Gregorian University in Rome.

"The whole process started when victims spoke out," said the Jesuit priest, who noted that it is the testimonials of the victims that paint a clearer and painful picture of McCarrick's crimes.

"I do hope with all the wounds that are reopened by reading such a report that there is some solace, a little sign of hope that the church wants to bring accountability to those who have been involved," Zollner said.