Without forgiveness, there's no room left for love 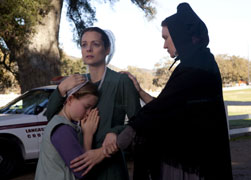 On Oct. 2, 2006, the country was shocked by the news that a lone gunman had entered an Amish schoolhouse in Nickel Mines, Pa., and shot 10 Amish girls aged 6 to 13. Charles Carl Roberts IV, 32, an "English" (non-Amish) milkman known to the children, shot the girls and then turned the gun on himself. Five of the girls died and the other five were seriously injured.

But we were in for an even greater shock: The Amish community, including the families of the dead and wounded children, forgave Roberts. They visited his wife, Marie, and offered their condolences to her and the couple's three children.

As the Amish buried their daughters, the media watched. They questioned this deeply countercultural attitude of the Amish and were, at the same time, astonished.

The Lifetime Movie Network airs a film based on this tragedy, "Amish Grace," on Palm Sunday.

"Amish Grace" is a fictionalized account of the events that began on an ordinary autumn day.

Some artistic license is taken with the story. The film creates a conflict between Ida Graber (Kimberly Williams-Paisley), the mother of one of the victims; her husband, Gideon (Matt Letscher); and her faith. Ida's sister has left the Amish community after her baptism and is now shunned. Ida, unable to forgive the gunman, wants to leave and join her sister. This predicament questions and then attempts to answer our own non-Amish confusion at a seeming contradiction. How can the Amish forgive such grievous actions yet shun members of their own family and faith community? "The only way to explain the Amish attitude toward forgiveness was to take a character and have her go through what we would go through and confront those same issues," said the film's executive producer, Larry A. Thompson.

The film is inspired by the nonfiction book Amish Grace: How Forgiveness Transcended Tragedy by Amish scholars Donald B. Kraybill, Steven M. Nolt and David L. Weaver-Zercher. "One Sunday morning," recounts Thompson, "I was watching Bill Moyers talk about this amazing book and I ordered a copy right away. I spoke with Donald Kraybill who told me film rights were available from the publisher, but because of the authors' close relationship with the Amish community, they would not be able to consult on the film.

"Out of respect for the Amish community, the characters are a composite of actual people. The only real persons named in the film are the gunman and Marian Fischer, the young girl who told him, 'Shoot me first.' "

Many will recall Peter Weir's 1985 Oscar-winning film "Witness," starring Harrison Ford as a cop who takes refuge with an Amish family and draws corrupt policemen and violence into the community. One deeply moving scene in "Amish Grace" is reminiscent of "Witness," when the Amish community of Nickel Mines walks all together down a hillside to join the Roberts family at the killer's funeral.

The Amish Mennonite church is a Christian denomination that originated in Switzerland in the late 1600s. They are known for simple and unadorned worship, dress and style of living, and nonviolence. They avoid modern conveniences and technology.

The film explains the rationale for shunning church members who violate their baptismal vows. The Amish are baptized into the church at about the age of 17 or older. Shunning is a disciplinary church matter, while unconditional forgiveness of offenses is a mandate of Jesus. To the Amish, forgiveness does not imply pardon, which is the divine prerogative, nor does forgiveness mean there are no consequences to evil actions. In the film, the character Levi tells reporters, "Forgiveness comes from an open heart. And it comes without condition, or it doesn't come at all."

Ida accuses Gideon of making their daughter Mary Beth's life and death cheap by his "easy forgiveness." Gideon replies that the Lord does not ask them to follow an easy path. But "faith when everything is the way you want it is not true faith. It is only when our lives fall apart that we have the chance to make our faith real."

Gideon must also explain forgiveness to his younger daughter Katie. He uses language she can understand, "Hate is a very big, very hungry thing. Lots of sharp teeth. It can eat up your whole heart, and leave no room left for love."

Two excellent documentaries about the spiritual, physical and psychological aspects of forgiveness, now available on DVD, take the tragedy in Nickel Mines as their point of departure. Paulist Pictures' "The Big Question: A Film about Forgiveness" and Journey Films' "The Power of Forgiveness" complement "Amish Grace" beautifully.

"When I heard what happened in the Amish community that day and how the people forgave Charles Roberts," said Thompson, "I remembered how I always prayed, 'Forgive us our trespasses as we forgive those who trespass against us.' I could talk the talk but the Amish people in Nickel Mines walked the walk of forgiveness."

"Amish Grace" reflects the Amish culture in its simplicity and gentleness. The acting is appropriately restrained, heartfelt, honest and resists sentimentality. The scene of the shooting at the schoolhouse is dramatically suggested and the emotional impact is, therefore, more profound and stronger than any graphic detail could have ever evoked. Frankly, I couldn't stop crying.

"Amish Grace" excels because it is not a message movie but a story that transcends tragedy. It is a fitting film for Holy Week when Christians the world over seek to walk in the footsteps of Jesus in sincerity and truth.

Without forgiveness, there's no room left for love