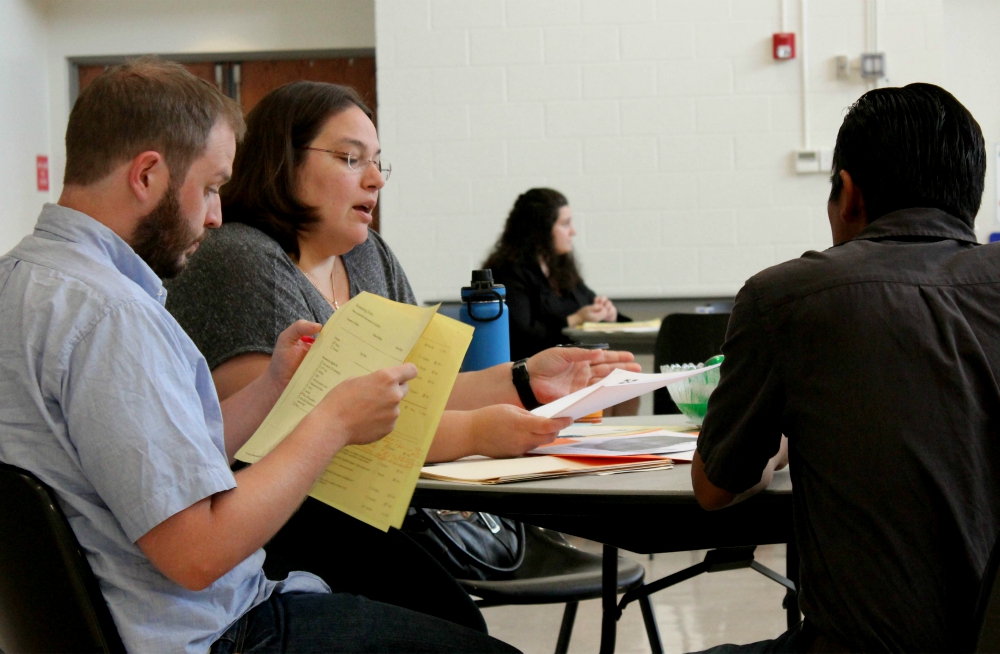 Michelle Sardone, second from left, and another staff volunteer from Catholic Legal Immigration Network assist at a screening for those with Deferred Action for Childhood Arrivals status Sept. 11 at St. John Neumann Catholic Church in Reston, Virginia. (Courtesy of CLINIC)

Hundreds of thousands of people trapped in our broken immigration system don't need amnesty to reconcile their status in the U.S., say immigration experts — they simply need justice as defined by the nation's laws.

Immigration experts say that perhaps more than a million people don't know they are eligible for legal residency. Others are wrongfully detained or deported because they don't know their rights or can't access legal aid that could help them. Without the right to a provided attorney, the immigration system is often stacked against them.

"To conceive of a system that has such devastating consequences for people's lives, on their freedom and on their possibilities of the future, and to think that they're not entitled to counsel is just outrageous," said Camilo Pérez-Bustillo, director of research, advocacy and leadership development at the Hope Border Institute and research professor of human rights at University of Dayton School of Law.

Legal advocates have identified certain classes of cases in the immigration system that have high potential for favorable outcomes when the people affected receive the information they need and are able to obtain affordable, competent legal aid.

These include asylum seekers who are ordered deported because they have missed court dates, undocumented immigrants who do not realize they may be eligible for lawful permanent residency, and even U.S. citizens who are detained by immigration authorities. Advocates say the key to improving the system is granting those in immigration court the right to an attorney.

While some immigrants can afford a competent lawyer, or manage to find free or low-cost representation, others face the judge alone, or entrust their case to incompetent attorneys or unscrupulous individuals who misrepresent their legal credentials, often known as notarios, said Michelle Mendez, training and legal support senior attorney at Catholic Legal Immigration Network (CLINIC). 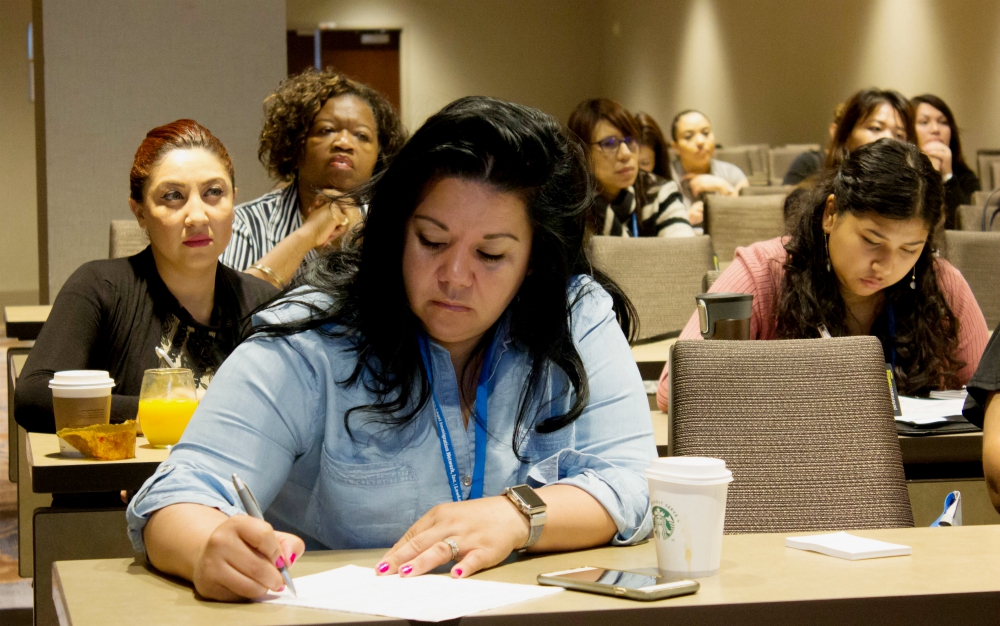 Attendees listen during a workshop at CLINIC’s 2017 Convening in Atlanta May 24. The annual gathering provides immigration law, program management and advocacy education. (Courtesy of CLINIC)

According to the Transactional Records Access Clearinghouse, a database and research organization at Syracuse University that informs the public about federal government activities, representation in immigration court rose in the past few years, but around 35 percent of immigrants still go unrepresented; those numbers rise to nearly 70 percent for immigrants in detention and can reach 80-90 percent for certain communities.

Disadvantaged by no representation

A campaign by the Asylum Seeker Advocacy Project, partnering with CLINIC,* files motions to reopen the cases of asylum seekers with children who received in absentia deportation orders after missing court dates. The campaign provides an example of the stark difference legal representation can make.

Most asylum seekers do not realize it is possible to reopen their case and could not successfully do so without an attorney, said Liz Willis, program manager for the project. Yet once the families do receive representation, over 90 percent of cases succeed, even though they are accepted without regard for their chances of success.

"The families we worked with often went through detention, they passed a credible fear interview, they believe they would have a chance to win asylum. ... There are all these factors that would indicate to a judge or any reasonable person that this person would not intentionally miss their hearing," said Willis.

Some of the families they helped have gone on to win asylum cases, she added. "It's also crazy to think that some of ... those families wouldn't have been able to present their claim even though they were refugees."

Undocumented immigrants who do not realize they might have a path to legal status make up another underserved group that could benefit from increased legal aid. 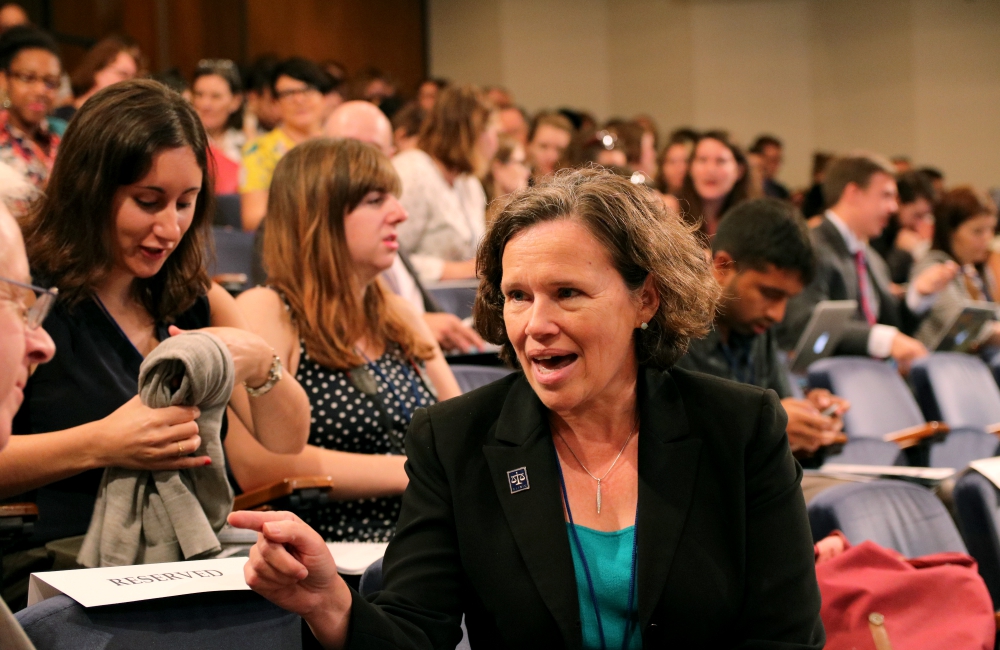 Jeanne Atkinson speaks to attendees at the 2017 Immigration Law and Policy Conference in Washington, D.C., Sept. 25. (Courtesy of CLINIC)

CLINIC Executive Director Jeanne Atkinson told NCR that CLINIC recently funded a project that screened 3,000 individuals in southern states** and found that 15.4 percent were either eligible to file for legal status or would be eligible for "defensive" forms of relief, which apply when someone is already in court.

In a study of immigrants applying for Deferred Action for Childhood Arrivals status, said Michelle Sardone, director of legalization at CLINIC, the organization found that 14 percent were eligible for something better; a few were citizens without realizing it.

Nationwide, this means that more than 1.5 million undocumented immigrants could be eligible for lawful permanent residence and eventual citizenship, said Atkinson. This could create a chain reaction, since lawful permanent residents and citizens are allowed to petition for certain relatives to immigrate or, in some cases, to regularize their legal status.

Aliyah Donsky of Catholic Charities in the New Orleans Archdiocese and Amelia McGowan of Catholic Charities Diocese of Jackson, Mississippi, have partnered with CLINIC to sponsor screenings and told NCR that immigrants, especially in rural areas, have trouble accessing screenings or applying for legal status once they learn they may be eligible because of the scarcity of free or low-cost service providers.

The Department of Justice is required to post a list of such providers online, said Jacqueline Stevens, a professor of political science at Northwestern University and director of the university's Deportation Research Clinic, but this often only demonstrates the deficiency of legal aid.

"Right now if you look at the Chicago list [of legal aid providers], there are two names on it," Stevens said. "It's kind of a charade because they [the Justice Department] know that the organizations don't have the capacity to help more than a fraction of the people who contact them."

Mendez is coordinating CLINIC's efforts to increase competent representation. This includes both finding more pro bono attorneys and training accredited representatives — non-attorneys who work for nonprofits that provide free or low-cost legal services and are authorized to practice immigration law in a limited way.

"I am willing to work and fight as hard as I can for their case. For very little money. Very little money, or no money," said Jenny Cachaya, who became a fully accredited representation for Catholic Charities in the Archdiocese of Washington, D.C., in part to replace a departing attorney. She says she focuses on defending "the most vulnerable out of the most vulnerable."

A 2015 study published in the University of Pennsylvania Law Review found that immigrants in detention with representation were 10.5 times more likely to win their cases than those without. Released and never-detained immigrants with representation had their chances improve by factors of 5.5 and 3.5, respectively.

Although these statistics may be inflated because those with winnable cases more often find representation, a program by the Vera Institute of Justice to offer free representation to all immigrants in a New York court found that the rate of success rose from 4 percent to at least 24 percent. Since successful cases often take longer to finish, the final rate is projected to be around 48 percent.

The Vera Institute's SAFE Cities Network will soon expand the program it piloted in New York to about a dozen cities, including Chicago, Atlanta and Oakland, California, offering free legal representation to all immigrants in those areas. 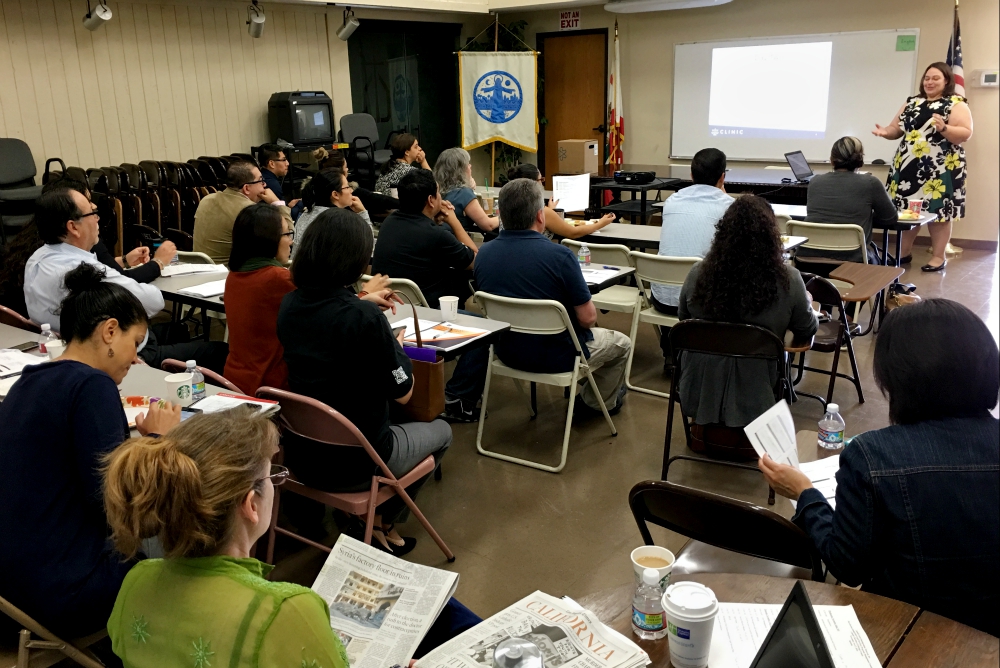 Legal counsel is so vital because immigrants often seem to be facing an uphill battle in court. Their judges "have more discretion than any other kind of judge in the U.S." and often seem to begin with a presumption of guilt, said Pérez-Bustillo, later adding that advocates should ask for "some kind of framework for how discretion is exercised in these cases."

Stevens said that the government should assign an attorney, "especially for anybody that's in detention," just as it does for criminal court, especially because people may be citizens without realizing. She also added that the detention and deportation of U.S. citizens is a symptom of a larger problem with the immigration court system.

"If even people who are born in the United States are getting deported under our deportation laws, then that tells us a lot about the inability of the government to ascertain people's legal status," Stevens said. "And if they're doing this to U.S. citizens then of course they're unlawfully deporting huge numbers of people who are not U.S. citizens but nonetheless have a legal right to remain in the country."

Stevens suggested that the right to an attorney might eventually be extended to everyone in the nation's immigration courts.

"I think that if enough of these cases get put in front of the federal courts that there is a legal rationale for ordering this along the lines of Gideon v. Wainwright," she said, referring to the 1963 Supreme Court case that "required assigned attorneys for people in criminal cases."

"If the question is 'When are you normally entitled to legal representation?', the general rule is whenever the stakes are high, in terms of your freedom, your rights, your livelihood," he said. "If there's a stake that involves your personhood, your safety, your body, you should have a voice. So representation is about that, about having a voice."