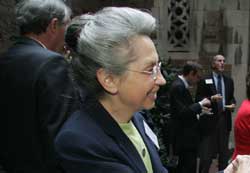 Rome
Officers of the Leadership Conference of Women Religious met April 22 with Cardinal William Levada, prefect of the Vatican’s Congregation for the Doctrine of the Faith, after having been informed weeks earlier that his congregation had begun a “doctrinal assessment” of the women’s organization.

Neither the congregation nor officers of the conference released any statement after the meeting. The Vatican spokesperson, Jesuit Fr. Federico Lombardi, confirmed to NCR that the meeting took place, describing it as “very serene,” and said that the officers of the conference “now have all the elements for understanding the nature of this initiative.”

Any further comment, Lombardi said, should come from the sisters as they pass along the information to their members.

U.S. women religious were already reeling from news of a Vatican-sponsored visitation of all apostolic women’s religious orders in the United States, designed to assess their “quality of life,” when they learned that their leadership was under investigation by the Vatican.

In the absence of public statements about the motives and scope of the new inquiry, observers have raised three basic questions:

Officials both in the Vatican and in the U.S. Conference of Catholic Bishops, as well as sources in religious life, spoke to NCR about these questions on background, because the officials involved are not authorized to speak publicly.

News of the second investigation came in a February letter to the officers of the conference from Levada. Their meeting with him in Rome April 22 was part of a previously scheduled visit to various Vatican offices by leaders of both the women’s leadership conference and the Conference of Major Superiors of Men, an umbrella group for men’s orders.

While the previously announced visitation of the apostolic communities, sponsored by the Vatican’s Congregation for Institutes of Consecrated Life and Societies of Apostolic Life, is itself unusual, the fact that the leadership conference is now the target of a separate doctrinal inquiry is virtually unprecedented.

Vatican officials told NCR that they are not aware of another case in which the congregation has conducted a doctrinal assessment of a national-level association of religious orders.

Regarding the motives for the review, one source said the concern is "entirely" about speakers the Leadership Conference of Women Religious has invited to address their annual assemblies in recent years, based upon the texts of those presentations posted on the conference’s Web site.

Though this official did not cite specific speakers or topics of concern, Levada’s letter pointed to three areas of doctrine that he said the congregation first flagged in a 2001 meeting with officers of the leadership conference: the ordination of women, the theoclogy of religious pluralism, and homosexuality. Most observers believe that a principal aim of the assessment is to ensure that future speakers at the conference’s assemblies will be screened for their positions on those issues.

Sources also told NCR that while it’s the Vatican that commissioned Bishop Leonard Blair of Toledo, Ohio, to conduct the doctrinal assessment, at least part of the push came from the Committee on Doctrine of the U.S. Conference of Catholic Bishops. Blair is a member of that committee.

In terms of process, the Vatican’s involvement has raised eyebrows for two reasons: First, because the assessment is being conducted by the Congregation for the Doctrine of the Faith, as opposed to the Congregation for Institutes of Consecrated Life and Societies of Apostolic Life, which normally has jurisdiction in matters involving religious orders; and second, because the Vatican is doing it at all, as opposed to allowing it to be handled by the American bishops. The latter is particularly striking in light of what has seemed an informal policy of the doctrinal congregation in recent years of preferring that disciplinary matters be resolved at lower levels.

For example, a negative 2007 assessment of American theologian Fr. Peter Phan was issued by the U.S. bishops’ Committee on Doctrine, rather than the Vatican.

By way of explanation, officials said that the reason for the doctrinal congregation’s involvement is because the issues touch on matters of theological orthodoxy. Moreover, the leadership conference is not itself a religious order. Nevertheless, Vatican officials said the decision was worked out in consultation with Slovenian Cardinal Franc Rodé, who heads the congregation on consecrated life, and that Rodé will be involved in whatever decisions are reached.

As to why the Vatican is sponsoring the inquiry rather than the bishops’ conference, observers point out that the Leadership Conference of Women Religious has been recognized by the Vatican as an official entity under the church’s Code of Canon Law since 1959. The Vatican thus has the capacity to issue official recommendations or mandates, whereas the bishops’ conference can present only non-binding guidance.

In 1995, the Vatican also granted recognition to another group, the Council of Major Superiors of Women Religious, which is generally seen as a more conservative alternative to the leadership conference.

“The implied threat is that Rome could leave the council as the lone official representative of women religious in the United States,” one source told NCR.

While the bulk of women’s orders in America currently belong to the leadership conference, some observers believe that an alteration in its canonical status could change that picture significantly.

As the process moves forward, observers say a key behind-the-scenes figure could be Archbishop Donald Wuerl of Washington, D.C., who was elected chair of the U.S. bishops’ doctrine committee at the November 2008 bishops’ meeting. Wuerl will take over leadership of the committee this fall, and has a reputation as a conciliator. The committee on doctrine is expected to play an important, albeit informal, role in terms of advice and support, which could position Wuerl to act as a mediator.