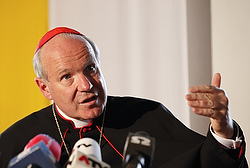 VATICAN CITY -- Austrian bishops have criticized an effort by a group of priests calling for reforms in church practice, including opening the priesthood to women and married men, but the bishops have not taken or threatened disciplinary action.

Michael Pruller, spokesman for Cardinal Christoph Schonborn of Vienna, said the cardinal plans to meet in late August or September with the Viennese priests who are among the leaders of the "Initiative of Parish Priests," which launched a "Call to Disobedience" in June.

The initiative, which says it has just more than 300 members, suggested saying a public prayer at every Mass for church reform; giving Communion to everyone who approaches the altar in good faith, including divorced Catholics who have remarried without an annulment; allowing women to preach at Mass; and supporting the ordination of women and married men.

In a telephone interview from Vienna July 11, Pruller said that as far as he knew, the Austrian bishops have not discussed a common response to the priests.

"No bishop has threatened disciplinary actions, but at the end of the day if a priest leads his parish away from what the church teaches, action would have to be taken," Pruller said.

The "Call to Disobedience" said the priests felt forced to follow their consciences for the good of the church in Austria because the bishops have refused to act.

Cardinal Schonborn issued a statement June 22 and said he waited three days to respond because he did not want to react "out of the anger and sorrow" the priests' initiative caused him.

"The open call to disobedience shocked me," he said.

The cardinal said none of the priests was ordained by force and all of them vowed obedience as they strive to do God's will.

Cardinal Schonborn said righteous human beings must follow their conscience, and if the priests really believe they have such an extreme conflict of conscience with the church, they probably should consider whether they still belong in the church.

"I believe and hope, however, that this extreme case does not occur here," he wrote. But ultimately, "we all decide whether we want to walk the path with the pope, the bishops and the universal church or not."

Bishop Egon Kapellari of Graz, vice president of the Austrian bishops' conference, issued a statement June 28 saying the priests' proposals "seriously threaten the identity and unity of the Catholic Church."

While pastors are right to be concerned about providing more and better pastoral care to Catholics in the country, the situation in Austria is not so drastic that it would require priests to act outside communion with the universal church, he said.

It is one thing to call public attention to the needs of the church, Bishop Kapellari said, and it is another to encourage people to disobey church teaching and practice.

Bishop Kapellari said that while personal conscience is a "highly respected value" in the church, it is wrong to imply that the pope and bishops are not acting out of their own good conscience when promoting the unity and tradition of the church.

Jewish leader: Polish church should speak out as anti-Semitism rises