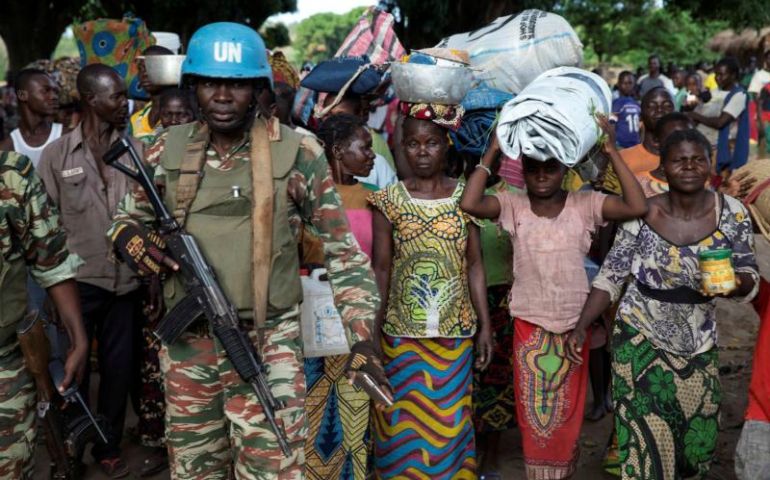 Oxford, England — A cardinal in Central African Republic called on international peacekeepers to act more effectively, after he helped end an anti-Muslim flare-up in the southeastern city of Bangassou.

"In protecting civilians, this peacekeeping mission has only half fulfilled its role — I think its manner of acting has to be corrected," said Cardinal Dieudonne Nzapalainga, president of the bishops' conference in the Central African Republic.

"Although it's good United Nations forces secured the town, refugees from its mosque were left to their own devices for three days. You can't ask the population to take refuge in a particular place, and then just leave it to its sad fate."

The cardinal, 50, spoke after returning May 18 from four days in Bangassou, where at least 100 people died when heavily armed rebels attacked the town's Muslim quarter May 13. Six U.N. peacekeepers were among the dead.

Meanwhile, the Catholic Justice and Peace Commission urged an immediate halt to the violence, so injured people could receive medical treatment, but also asked targeted communities not to retaliate.

"The persistence of insecurity shows us local realities are not being taken seriously," the commission said in a statement, published May 18 in the capital, Bangui.

"We denounce and condemn these grave violations of human rights, these acts of barbarism and vandalism perpetrated by armed groups, and appeal for restraint and calm to avoid another deluge which could provoke new intercommunal conflict."

France's Catholic La Croix daily reported Spanish-born Bishop Juan Aguirre Munoz of Bangassou had gone to the city's central mosque May 14 to arrange the evacuation of at least 1,000 fugitive Muslims to the Catholic cathedral and seminary.

La Croix reported that Cardinal Nzapalainga had arrived in Bangassou, his hometown, May 15, and negotiated the withdrawal of the rebels, whom U.N. military officials identified as members of the mainly Christian anti-Balaka militia.

Armed groups were still positioned near Bangassou, close to the border with Congo, and clashes were reported in mid-May around the central town of Bria, where at least 17 people died.

Aguirre told La Croix May 18 the mosque's imam had been shot dead next to him, adding that local Muslims had been "targeted like rabbits" by snipers during three days without water and food.

The bishop said he had personally witnessed 80 burials after the violence, which the International Red Cross said left 115 dead.

Local news reports said the latest violence had been provoked by new tensions between Seleka and anti-Balaka militias, whose remnants have periodically gone on the rampage across the country since a new president, Faustin-Archange Touadera, took office in March 2016 on a pledge of peace and reconstruction.

In its statement, the Justice and Peace Commission said Alindao, 100 miles west of Bangassou, had also been left "totally destabilized" after early May clashes between militias. It said more than 8,000 people were also sheltering in church-owned buildings in the town.