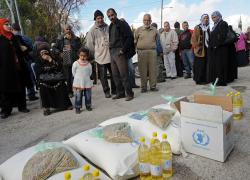 Beit Sahour, West Bank -- Ra’ed Abu Rdneineh surveyed the overcast sky with satisfaction. Despite early morning threats of rain, the weather held out and the second truck of basic food supplies in as many days destined for East Jerusalem from Catholic Relief Services was almost loaded.

If it had rained during the loading process the sacks of flour would have been spoiled, explained Abu Rdneineh, Catholic Relief Services project officer in Bethlehem. Thankfully, the distribution was not being postponed and 300 families in Al Ayzariyah would receive the much-needed food packages.

The agency has distributed food supplies to needy West Bank Palestinian families in conjunction with the U.N. World Food Program since 2003. Only recently, however, has the U.S. bishops’ aid and development agency renewed its work in East Jerusalem, Abu Rdneineh said.

The program works in two-month distribution cycles, providing flour, rice, oil, salt and other staples to people in need.

In other locations participants work in various sectors identified by the U.N. in return for aid. On this brisk December morning the supplies were slated for the most vulnerable people: those unable to work because of illness or age, and families led by a single mother.

As the final supplies were loaded, project coordinators Issa Muallem, 24, and Adi Khalil, 22, began their own trek into Al Ayzariyah. If they traveled directly to the village through Israel, it would be a 15-minute trip. But now they — like all Palestinians -- need a special permit to travel the direct route through Israel-controlled Jerusalem. So they travel the Wadi Nar bypass road. The route can take a lot longer depending on the mood of the soldiers at the checkpoint in East Jerusalem at the Israeli separation barrier before entering Palestinian territory.

After navigating the bustling taxi station that cropped up in Bethlehem to accommodate travelers using the bypass road, Muallem and Khalil board a cab, which will take them on the first leg of their trip.

The taxi careened down the steep and winding back roads on the edge of the Judean desert toward Jerusalem. The driver directed the car over potholes and overtook slower cars, effectively making a two-lane road into three.

Wadi Nar means valley of fire, Muallem explained. “But we call it the valley of death,” he said with a grin.

As the taxi approached the checkpoint, passengers began rummaging in their bags, preparing for an identity check. Today, however, like the weather, the soldiers at the checkpoint cooperated and the taxi drove through without even a perfunctory look.

At the edge of the municipality the taxi stopped. From there the passengers transferred to another cab for the final part of the trip to the distribution site at the Ministry of Waqf and Religious Affairs, a program that promotes awareness and understanding of the Islamic religion and culture. By the time they arrived a dozen women in hijabs or robes had already gathered in the parking lot.

“The [Israeli] wall has influenced us a lot,” said Olah Abu Damous, the local committee coordinator, as she helped Khalil and Muallem set up tables before the food distribution. She said most of the households receiving aid made less than $300 a month. Some households include up to 15 people, she said.

“The municipal capital for Al Ayzariyah was Jerusalem and now people can’t get to work [because of the wall],” she explained. “Now many of the families are being supported only by the women who do embroidery in workshops. We need this help urgently.”

Walid Bakri, assistant project officer for Catholic Relief Services, said plans call for the project to be extended for another six months.

“The poverty here is not as acute as in some villages but the cost of living here is higher,” he said.

As the crowd grew and Khalil and Muallem registered the recipients, the truck from Beit Sahour made its way into the parking lot. People stepped forward as their names were called to retrieve the supplies, with old women clutching the bottles of oil to their chests as the men worked in teams to carry the heavy flour bags to awaiting cars.

Adlah Said Abu Damous, 53, had come to get the aid package for herself and her 75-year-old mother with whom she lived. Her four brothers, who are struggling themselves because of the region’s poor economy, help support their mother, said Abu Damous, who did not finish high school and does not work. She and her mother bake bread at home to save money. She said the flour rations would free up the little funds they had to buy other essentials.

“These are basic supplies,” said Afaf Faroun, 25, a university student and mother of three young children. “The prices have gone up and are more expensive than in the past. My husband’s salary as a taxi driver has gone down.

“Maybe when I start working and can help my husband we won’t need help, but maybe I won’t be able to find work. In this country we need aid. All the people are poor and we need it.”

Francis appeals for end of Aleppo fighting: war is 'pile-up of tyrannies and lies'