by Eduardo Campos Lima, Religion News Service
World
This article appears in the Synod for the Amazon feature series. View the full series. 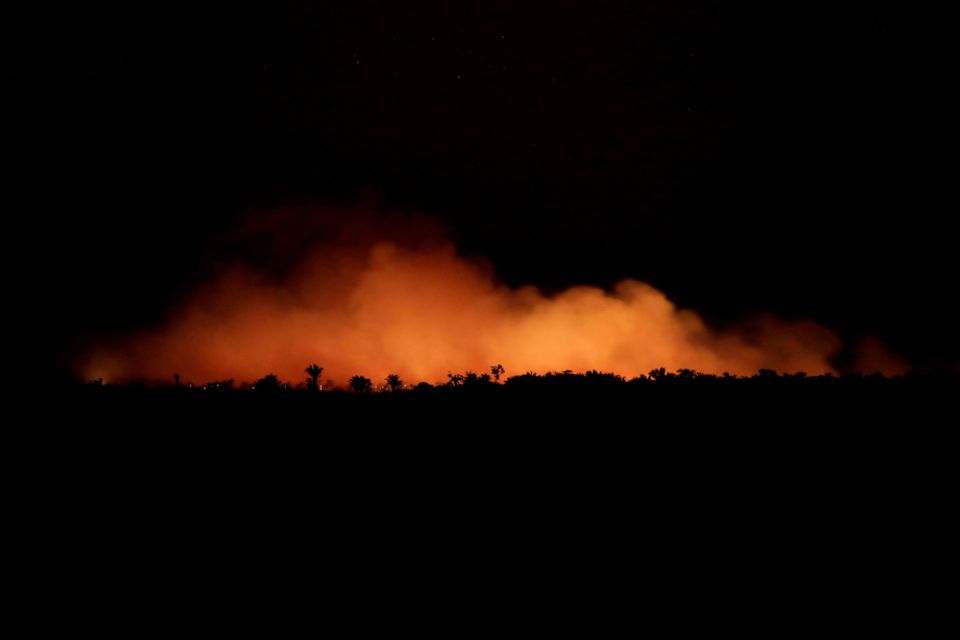 SAO PAULO, Brazil — The apparently intentional escalation of fires in the Amazon rainforest has contributed to a growing political split among religious groups in Brazil, as the country's Catholic bishops and Protestant denominations have spoken out against President Jair Bolsonaro's environmental policies while his evangelical Christian allies have remained silent, or even debunked the criticism.

Though the fires have only come to the world's attention in recent days, the controversy began in Brazil in July, when Bolsonaro contested the veracity of data showing the increasing deforestation rate of the Amazon. Brazil's National Space Research Institute reported that the devastation of the Amazon grew 278% in July 2019 compared to July 2018.

Bolsonaro's comments led to the dismissal of Ricardo Galvão, the physicist who directed the institute.

On August 19, the smoke produced by wildfires in the Amazon, and other biomes in Brazil and Bolivia, darkened the sky in São Paulo, Brazil's largest city, located 2,000 miles southeast of the rainforest. Scientists confirmed that the black rain that fell that day contained retene, a product of burning biomass. INPE showed that the 40,341 wildfires recorded so far this year represent an increase of 82% compared to the January to August of 2018 timeframe.

Wildfires are common during the dry season in the Amazon, but there is evidence of criminal actions perpetrated by big landowners in the region, who use the fires to clear forest to expand their farmlands. The Brazilian magazine Globo Rural published a story recently about a group of farmers and miners in the Amazonian state of Pará that used a messaging app to call for a "day of fire."

According to Globo Rural, men hired by the group set fire to a large reservation on August 10, provoking the biggest wildfire in the history of the state. Their aim was to protest against the current environmental laws and to show their support for Bolsonaro's plans to loosen restrictions on companies in the region. Bolsonaro in turn accused non-governmental organizations of starting the wildfires, without citing any evidence, saying they wanted to foment opposition against him and the Brazilian government.

On August 22, the Ecumenical Forum ACT Brazil, a council of Protestant denominations and the Catholic Church, released a statement saying the Bolsonaro administration's policies "led to a surge in devastation of the environment" in the country.

The next day, the National Conference of the Bishops of Brazil released a statement that did not mention the president by name but said, "This is not the time for insanities and absurdities in judgement or in speech." The bishops demanded urgent action to save a "region that is crucial for the ecological balance of the planet."

This week, the Catholic bishops of the Amazon are gathering in the state of Pará to attend the last preparatory meeting for the upcoming Synod for the Pan-Amazon Region, which will be held in the Vatican in October.

The defense of the Amazon and its peoples is a central part of the debates regarding the synod. Earlier this year, Catholic activism on rainforest issues caused members of the Bolsonaro administration to accuse the Church of acting as a "leftist opposition" group.

But since the crisis began, evangelical organizations, representing some 22% of Brazilians, have made no public statements about fears of deforestation. While small groups of evangelicals attended street demonstrations in São Paulo and other cities against the Amazon's destruction last week, the largest evangelical bodies, such as the Assembly of God and the Universal Church of the Kingdom of God, preferred to ignore the problem.

Lutheran pastor Inácio Lemke, president of another interfaith group, the National Council of Christian Churches in Brazil, charged that no Christian should be silent about the destruction of the Amazon. "Brazil is supposedly a Christian country, but many Brazilians seem to accept extreme violence. The evangelical bloc supports the landowners block and the firearms bloc. They don't have any real commitment to the Gospel."

Some political observers have echoed Lemke's criticism. "Due to their alliance with Bolsonaro, the evangelicals started to oppose the protection of the environment. They assimilated the idea that environmentalism is a disguise for communists and for international leaders who want to take the Amazon from Brazil," said Renan William dos Santos, a researcher at the University of São Paulo who investigates the relations of Christians with environmentalism.

Evangelicals have a significant presence in both Bolsonaro's cabinet and in Congress. In its 513-seat lower house, the Chamber of Deputies, more than 100 legislators identify as evangelicals, many of them pastors and leaders in their congregations.

Since 2011, Buzatto has tracked legislation going through the Congress, monitoring any measures that could be harmful to the indigenous peoples. Last week, the legislators debated a bill that would allow the non-indigenous farmers to plant in portions of indigenous reservations that are currently protected, possibly contributing to deforestation.

"During discussion, one of the leaders of the evangelical bloc gave a speech that echoed the anti-NGO arguments of President Bolsonaro and the landowners bloc," Buzatto said. The voting of the bill is currently suspended.

According to Santos, the evangelical position on the Amazon is influenced by their apocalyptic worldview. "From their perspective, there's no point in struggling against major ecological problems, given that the world is coming to an end and such issues are the signs of the times."

Many also refuse to engage in any systemic analysis when it comes to environmental issues. Pastor Leonardo Cortez, a leader of an Assembly of God congregation in the Amazonian city of Cacoal, maintains that the wildfires this year are not so big as they were in previous years — even though data demonstrates the opposite. Cortez also believes that the causes of the fire are natural. "With less humidity and an intensely warm weather, the fires naturally happen," he told Religion News Service.

Cortez, who sees no contradiction in the evangelicals' political alignment with Bolsonaro, said the current crisis has been magnified by people with economic and political differences with the administration. "The environmental activists don't understand that we take from the Earth a great part of our livelihood and of the commodities Brazil exports. So it's necessary for us to achieve a balance."

This week, the government announced a set of measures to deal with the wildfires, including the deployment of troops to the region. But Buzatto said he has been hearing from more indigenous residents of the Amazon as the fires reached their land. "They try to organize teams to contain the fire," he said, "but it's very dangerous."

Mattis: Nation must remember 'core principles we used to know, live by'