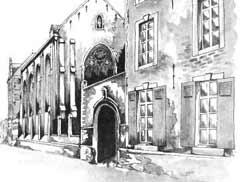 Etching of the American College as it is today.

John A. Dick is an alumnus of the American College of Louvain, Class of 1969, and a former member of the faculty. He offers this reflection on the closing of the school.

LOUVAIN, BELGIUM — In its 154th year, the American College of Louvain, the oldest foreign seminary governed by the U.S. bihsops, will shut down at the end of the current academic year in June 2011. The official announcement was made in a U.S. bishops' conference news release dated Nov. 22.

Based on the recommendations of a study by its own Apostolic Commission, the United States Conference of Catholic Bishops, at its most recent November meeting, has called for the closure of the American College of Louvain.

According to the USCCB news release: "Due to the small number of seminarians and available priest faculty, the American College of the Immaculate Conception in Leuven, Belgium, has announced its closure in June 2011. The announcement was made to the seminary community immediately after the decision was made by the board of bishops of the American College and confirmed by the body of bishops at the United States Conference of Catholic Bishops' (USCCB) General Assembly on November 17, in Baltimore." The news release further explained: "Despite strong efforts, enrollment has not grown at the American College to a sustainable level. In addition, the seminary has struggled with obtaining qualified priests for its faculty. Small enrollment creates significant financial challenges as well as difficulties for priestly formation."

Alumni from around the world have reacted with disbelief, astonishment and some anger and bitterness. The American College of Louvain is one of two seminaries overseas governed by the Conference, the other being the Pontifical North American College in Rome.

In his letter, Bishop Ricken explained the rationale for closing the college: "The criteria cited by the Apostolic Commission responsible for the Study, directed by the Bishops' Committee on Clergy, Consecrated Life, and Vocations were: small enrollment numbers; the significant challenges in peer formation in a small seminary environment; the shortage of priest faculty; and a small number of sending dioceses of the 178 Latin Rite dioceses in the United States. Stewardship of priestly and financial resources considered from a more universal Church perspective was also cited."

The American College of Louvain was founded in Louvain (Leuven) Belgium on March 19th 1857, under the leadership of Bishop Martin J. Spalding, Bishop of Louisville, Kentucky and Bishop Peter Paul Lefevere, Bishop of Detroit, with the encouragement and blessing of Pope Pius IX. The College's first rector was Fr. Peter Kindekens a Belgian-born priest who had been Vicar General of the Diocese of Detroit.

At the mid-point of the nineteenth century, the Catholic Church in North America was facing two major needs: finding priests to minister to a rapidly growing Catholic immigrant population, coming to its shores from Europe, and the formation of priests to minister to the indigenous peoples of the North American continent. The bishops of North America looked, in large part, to Europe for their priests, since they had few seminaries of their own and very few native-born priests.

The American College in Leuven was established by the bishops of the United States, therefore, with the dual purpose of training young European men to serve as missionary priests in North America and to train and educate young American seminarians in the philosophical and theological traditions of Louvain.

In his 1857 prospectus sent to all American bishops, Bishop Spalding stressed the purpose and advantages of The American College: "To afford a suitable opportunity for the pursuit of higher ecclesiastical studies to young men of talent and promise in the United States. The course of study adopted at Louvain is of the highest grade, and the professors are among the most learned and eminent ecclesiastics of Europe."

The American College affiliated with the Catholic University of Leuven in 1897, and by the time of its fiftieth anniversary, 1907, the College could boast of international renown, strong support from the United States and the successful completion of its first major building campaign.

Throughout the First World War, The American College, under the leadership of Rector Jules De Becker, who was born and raised in Leuven, served as the Herbert Hoover Belgian Relief program regional dispensary for food and clothing, ministering to as many as fifteen hundred people a day. After the war, the citizens of Leuven would also learn that many of the treasures of the University of Louvain, especially the famous mediaeval statue Sedes Sapientiae, had been secretly stored throughout the war at the American College.

Following the First World War, the American College lived through the pains of growth and post-war reconstruction, achieving stability by 1939 when the Second World War was on the horizon. It was in fact in December of 1939, when seminarians left for their Christmas vacation, that the College felt obliged to close. Despite the later heavy bombardment of Leuven, the buildings of the American College continued to stand and housed the remnants of the University of Louvain's library which had been burned for a second time.

In 1949 the American Bishops debated the future of the American College. In the end, convinced about the value and need for "Louvain-trained" priests for the United States, and thanks to strong personal backing from Bishop Russell J. McVinney, the Bishop of Providence, Rhode Island, they voted to reopen The College in 1952 under the rectorship of Father, later Bishop, Thomas F. Maloney from the Diocese of Providence.

After the College re-opened, it began to grow tremendously and famously; and Archbishop Fulton J. Sheen, himself a graduate of Louvain's Institute of Philosophy, became a strong and enthusiastic supporter of College. When the American College celebrated its one hundredth anniversary on June 29, 1957, Archbishop Sheen addressed a large Louvain audience of students, professors, and prominent guests: "When one goes into an intellectual gathering, one thing that one can always say with justifiable pride is that 'I am from Louvain.'"

Close to a hundred of the American College's alumni now hold professorships at colleges and universities across the United States and around the world. Their areas of academic expertise, of course, are what they specialized in at Louvain: historical theology, moral theology, biblical theology and church law. Many of them have taught at the Catholic University of America, whose establishment was inspired by the University of Louvain in Belgium. Certainly two of the most influential academic alumni of the College have been the American biblical scholar, and former rector of the American College, Raymond F. Collins and the now deceased professor of canon law at the Catholic University of America, James H. Provost.

Like many seminaries at the time, the American College reached its highest enrollment in the 1960s when the number of seminarians exceeded well over 100. In the years since the Second World War, the American College contributed hundreds of priests to the pastoral and academic life of the church in the United States and saw the successful completion of two major building renovation programs. And in the years following the Second Vatican Council, The College greatly transformed and enhanced its seminary program of priestly formation.

To complement its seminary program, the College also developed ongoing formation programs for priests and religious and lay men and women interested in graduate degree work at the University of Leuven or in a personalized time of sabbatical renewal.

The big and major sesquicentennial moment for the College, however, was on Saturday morning March 17, 2007: a colorful academic procession through the streets of Leuven and a solemn and joyful liturgy at St. Peter's Church in Leuven, with Cardinal Godfried Danneels presiding and Cardinal William Levada preaching. Present for this liturgy were a number of prominent civic, ecclesiastical, and academic leaders from Belgium and the United States: including representatives from the Holy See and the United States Conference of Catholic Bishops and members of the American College's Board of Bishops and its lay Advisory Board. A reception followed the liturgy in the Leuven City Hall. Certainly no one dreamed then that the end would be so close.

Since its sesquicentennial, enrollment at the American College has been gradually increasing, as shown in official registration figures, provided by the current College administration. There are currently 19 seminarians, coming from the dioceses of Green Bay, Milwaukee, Portland, WA, Rochester, Madison, Cheyenne, Orange, Holy Cross Fathers, Salford, England, and dioceses in Eastern Europe. In addition to the 19 seminarians, there are also 9 students in residence working on postgraduate degrees and about 5 people each semester on sabbatical. As far as the seminarian numbers are concerned, in academic year 2005-2006 there were 12 seminarians. In 2006-2007, there were 12. In academic year 2007-2008 there were 13. In 2008-2009 enrollment increased to 16. While it was 14 in academic year 2009-2010, a strengthened recruitment campaign brought enrollment up to 19 this year.

Although the College is under the supervision of the United States Conference of Catholic Bishops, the College has always relied on student tuition and financial gifts from special donors, alumni and friends, among whom of course have been a number of individual bishops and dioceses. Most recently, for instance, the Diocese of Green Bay has been exceptionally generous in its contributions to sustain the College. Since the Catholic University of Louvain (Katholieke Universiteit Leuven) is greatly subsidized by the Belgian government, American College students have been able to study at the University of Louvain (which now ranks with Oxford, Harvard and Cambridge as one if the world's most prestigious universities) at very low cost. At present, depending on the student's academic program, total tuition, room and board for a seminarian at the American College of Louvain range from $22,000 to $24,000.

As an older alumnus of the American College (Class of 1969) and a former member of the faculty, my great sadness at the announcement of its closing is tempered by an immense sense of gratitude and appreciation for the professors, staff members and students who have maintained and passed on the spirit of Louvain.

In ways and forms yet to be seen, I still believe the words of Father David Russell, a student from Louisville, Kentucky and the very first American student at the College (and later vice-rector of the College). Shortly after his arrival in 1858, he wrote about the American College to his bishop: "The zeal of its supporters is invincible."

German cardinal calls for change in church teaching on homosexuality

In Fatima, Francis asks for humanity to 'tear down all walls'