Attack on Iraq church called example of intolerance toward Christians 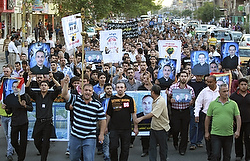 Residents take part in a Nov. 2 funeral for victims of the Oct. 31 attack on the Syrian Catholic cathedral in Baghdad, Iraq. (CNS photo/Thaier al-Sudani, Reuters)

UNITED NATIONS -- The Oct. 31 attack on a Catholic cathedral in Baghdad that left 58 people dead is "another tragic incident of the continued intolerance, discrimination and violence directed at Christians," said the Vatican's representative in a Nov. 1 address at the United Nations.

Archbishop Francis Chullikatt, permanent observer of the Holy See to the United Nations, said the incident underscores the need to ensure that all religions and all believers have "the most basic right to religious freedom and worship."

He was addressing the U.N. General Assembly's Third Committee, which deals with social, cultural and humanitarian issues.

Archbishop Chullikatt's statement did not elaborate on the siege by militants at the Syrian Catholic cathedral in Baghdad, beyond noting that "our thoughts and prayers go to the victims of this attack and their families, some of whom I have known personally."

The body of his remarks focused on the religious intolerance and discrimination and the rights of individuals. He cautioned against "the over-identification of racial or ethnic identity and religious belief," which he said leads to people facing multiple forms of discrimination.

"This linking of race and religion reinforces the flawed and tragic notion that religious belief is inherently tied to one's ethnic, national or racial background and thus prevents religious minorities within ethnic and racial groups from expressing and practicing their faith," said Chullikatt in an address that also touched on racism and xenophobia.

He warned that focusing on religious or ethnic profiling and stereotyping, or attacks on sacred books, religious sites or figures does not adequately address those problems as abuses of human rights and international law.

"While my delegation supports all efforts to protect believers from unjust hate speech and incitement to violence," he continued, "we remain concerned that the use of the concept of defamation of religions to achieve these aims has proven counterproductive and, instead of protecting religious believers, it has served as a means for state-sponsored oppression of religious believers."

Instead, he said the Vatican delegation supports a call for governments to move away from the concept of defamation of religions and to move toward "the legal concept of advocacy against racial or religious hatred that constitutes discrimination or violence" and address intolerance by fostering awareness of religious belief and mutual understanding.

Just as racial and ethnic discrimination occurs around the world, so also do many people around the world lack the freedom to pray in community, to make personal expressions of faith and to exercise their consciences in accord with their religious faith," said Chullikatt.

"These are men, women and children whose searching for God is a prohibited activity, with many facing serious physical and legal repercussions for the pursuit of such a fundamental human need," he said.

An August report of the U.N. Special Rapporteur on contemporary forms of racism, racial discrimination, xenophobia and related intolerance "fails to note the fate of Christians who have been driven from their homes, tortured, imprisoned, murdered or forced to convert or deny their faith around the world," said the archbishop. "This is a crisis which continues to be ignored by the international community and requires the urgent attention of international and national leaders to protect the right to religious freedom of these individuals and communities."

Iraqi Prime Minister Nouri al-Maliki said in a statement Nov. 1 that the attackers sought to drive more Christians out of the country and to pull Iraq back into sectarian fighting.

After a standoff that lasted hours, Iraqi forces stormed the cathedral and the ensuing firefight and a series of explosions left a large number of people dead and injured.

For more coverage, see: Cardinal calls for end to Iraq violence, urges US to protect Christians

Amid cover-up allegations, German prelate steps down from lay organization