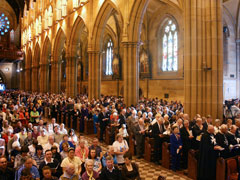 MELBOURNE and SYDNEY, AUSTRALIA -- Ten days in Australia isn't nearly enough, except to find that the church is alive and kicking.

My first-time-ever trip to Melbourne and Sydney in mid-May was as guest of Garratt Publishing, which publishes Australian editions of my books Women Deacons: Past, Present, Future (with Gary Macy and William T. Ditewig) and Women in Ministry: Emerging Questions about the Diaconate. Garratt sponsored conferences and talks, and introduced me both in person and on various radio programs to an alive and questioning church.

The issues in the Australian church are such that I might as well have been in the United States. Except instead of a "Fortnight of Freedom," the Australian bishops are supporting "A Year of Grace" from Pentecost 2012 to Pentecost 2013. In their program, every single brochure, video, Web page and mailing talks about Jesus Christ. It seems the bishops -- or at least the staff of the bishops' conference -- have their "messaging" under control.

The visit was full of surprises. Following the example of several U.S. donors who had purchased and sent the book Women Deacons to every U.S. diocesan ordinary and auxiliary, Australia's Catholics for Renewal group sent copies of the book to 42 Australian Catholic bishops and auxiliaries. The cover letter asked for a "broadening of the role of women in ministry."

Whether Catholics for Renewal has started a new conversation remains to be seen. There are but a relative handful of deacons in Australia. Would the bishops support adding women to the mix? One indication: They've just elected conservative Melbourne Bishop Denis J. Hart as their conference president. Hart, said to be a protégé of Sydney's Cardinal George Pell, succeeded Pell as bishop of Melbourne in 2001. Hart, vice chairman of the International Commission on English in the Liturgy, may be best remembered locally in Melbourne for telling a badgering sex-abuse victim, "Go to hell, bitch," after she knocked on his door in the middle of the night in 2004. Without "recalling" his exact words, Hart apologized in court several years later.

For the most part, I found Australians not at all reticent about their likes and dislikes, especially when church matters are on the table. The general tenor of discussion was part exasperation and part crusade. Many want change, but few had any idea how to make it happen.

In Melbourne much of the talk was about sex abuse and a government inquiry into the suicides of 40 young people who had been abused by clergy. In one parish church, I witnessed outright refusal to use the new liturgy, including omitting the creed at Sunday Mass.

In Sydney the crowd was both more and less edgy. To the applause of everyone present, one woman voiced strenuous support for Bishop Geoff Robinson, who unbeknownst to her sat in the second row. Many insisted on the ordination of women as priests. But overall there was a sense of commitment to staying inside the fold and working, even within the system, no matter the obstacles and no matter the cost.

At one event, a young teacher stood to ask: Where could they go? From her vantage point, she did not find that the church wanted young people, except to pray, pay and obey. Others asked much the same questions as I hear in the United States: Where should we donate our money? What will happen to the women religious? When will the Vatican wake up?

I answered as I always do: Without starving your parish priest, put money to social needs (typically the works of religious) and perhaps the Vatican will someday understand what really matters about church.

Interestingly enough, radio talk shows were trying to pit discussions about legalization of same-sex marriage against the bishops, but the bishops weren't biting. They did offer a bulletin insert, but the conversation-argument never really took off.

Personally, some of the most interesting conversations came by happenstance with Australians who "used to be" Catholic -- some of whom I met on airplanes. (The trip takes 24 hours from New York. You meet people.) While professional church-watchers slice and dice the latest Vatican statement and crisis du jour, these folks' falling away had little to do with dissatisfaction and more to do with the business of their lives. Church no longer bound them to a community or a cause. For them belief was private and no longer needed an intermediary.

For them, the used-to-be Catholics, the church had not lost so much to secularism as to the changing ways of society. Ceremony and sermon neither competed nor filled their needs for information or encouragement. I think that is the way it is all over. And I think the kicking Catholics are the ones the bishops should be grateful for.

[Phyllis Zagano is senior research associate-in-residence at Hofstra University in New York and author of several books in Catholic studies. She writes the Just Catholic column for the NCR website NCRonline.org/blogs/just-catholic.]

Orthodox patriarch hospitalized at start of 12-day US visit

As more Africans join social media, Catholic bishops warm up to its potential