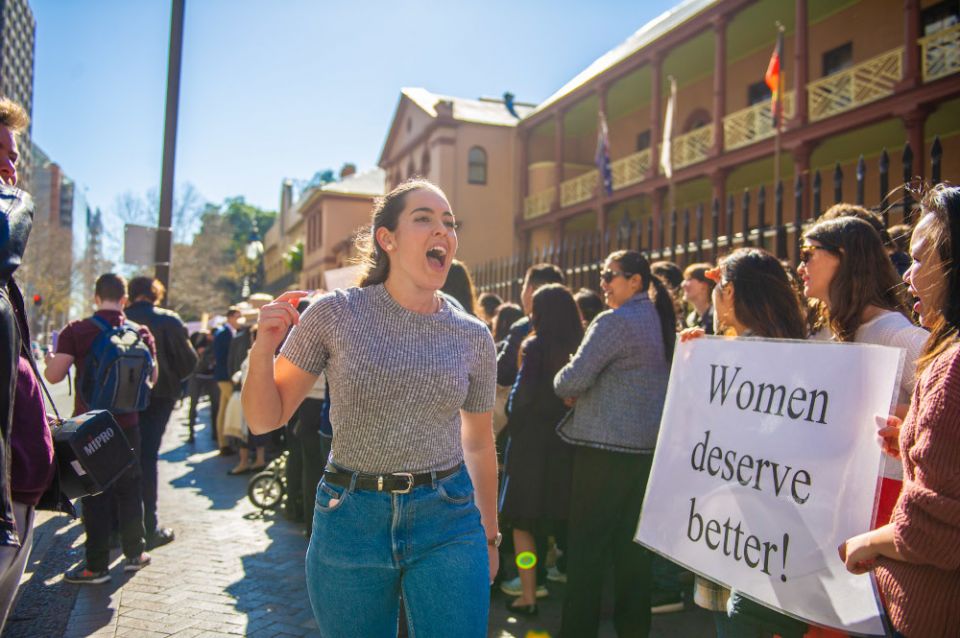 Bethany Marsh, a 23 year-old university student, leads pro-file supporters outside the New South Wales Parliament House in Sydney Aug. 1, 2019. Marsh was one of hundreds of young women who protested against the a bill that would legalize abortion as it was being debated by members of the New South Wales Parliament. (CNS photo/Giovanni Portelli, courtesy Right To Life NSW)

Sydney, Australia — Thousands of pro-life supporters demonstrated in the streets of Sydney, expressing their opposition to a bill in the New South Wales state parliament that would permit abortion until birth for any reason.

The demonstration on Aug. 20 called on members of parliament (MPs) to defeat the Reproductive Health Care Reform Bill that was introduced Aug. 1.

The bill passed on Aug. 8 in the Legislative Assembly, the lower house of the state parliament, 59-31, following a limited three-day period for comment.

The bill is pending in the Legislative Council, the upper house of parliament. Legislators had planned to vote on the bill by Aug. 23. However, in response to MPs angry at the lack of due process, New South Wales Premier Gladys Berejilkian announced the vote had been delayed until mid-September. Berejilkian supports the measure.

New South Wales is the only Australian state where abortion remains a criminal offense. Abortion is permitted only when the mother's physical or mental health is in danger.

As MPs debated the bill in the lower house, the pro-life movement maintained a vigil lasting several days outside of parliament. Many were young women concerned about the lack of protection in the bill for women and babies.

Bethany Marsh, 21, a university student, was one of those leading the peaceful but lively gathering.

The chairperson of LifeChoice Australia told Catholic News Service many young women are increasingly opposed to the ideology behind the push for abortion on demand, which pits women against their unborn children.

"The bill, while claiming to be 'compassionate', is possibly the most demeaning and inhumane piece of legislation to have ever been considered by the NSW parliament," she said.

"The presence of hundreds of young women outside parliament should have sent the message, loud and clear, that we, the young pro-life generation, do not want these abhorrent practices." 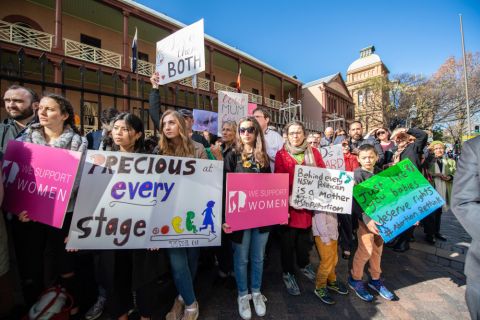 Later, thousands gathered for the Stand for Life Rally Aug. 20 in Sydney's Martin Place to protest the bill. The rally brought together secular pro-life groups and representatives of Catholic, Orthodox and Protestant churches.

Archbishop Anthony Fisher of Sydney addressed the crowd, saying they were evidence of "people power" and "God power." He thanked participants for saying "no to a bill that says you can kill babies right up to birth and even after they're born."

MP Tanya Davies, a member of the Liberal Party who voted against the bill, said the public deliberately had been shut out of the democratic process.

"Citizens of NSW, you have an equal voice in this debate and up to now the process has been designed to exclude your voice and the voice of your communities," she told the crowd.

She called for "a tsunami" of opposition to the legislation over the next three weeks.

If enacted, the legislation would further the financial aims of abortion providers, Rachel Carling-Jenkins, CEO of Right To Life NSW, told CNS.

"This is harmful to mothers who, instead of getting the help they need during a crisis, will be automatically redirected to the cheapest option, i.e., termination of their unborn child," Carling-Jenkins said.

"This bill opens up an opportunity for abortion providers to further profit from women uncertain of their options." 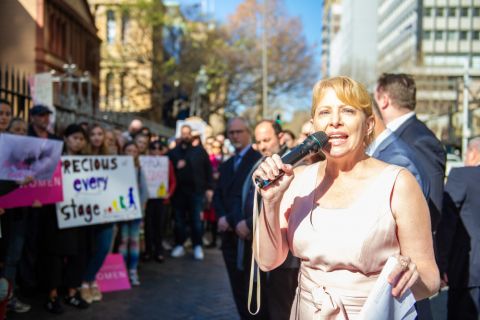 Tiana Legge, CEO of Women and Babies Support, said the lack of restrictions on abortion in the legislation would make pregnant women even more vulnerable to coerced abortion.

"What we've heard from women is that many are pressured and coerced and coercion can take many forms," Legge said. "It can include a male partner who is using physical or emotional threats and violence against her to coerce her to have an abortion. It can also involve pressure from parents, others close to them or work colleagues and also just a general lack of support."

In its present form, the bill does not require that women seeking abortion be offered counseling, that babies born alive after failed abortions be rendered medical assistance, or that parental consent be obtained before performing abortions on minors young than 16. It also does not prohibit sex-selective abortion.

The bill mandates, however, that a doctor with a conscientious objection to abortion must refer a woman seeking an abortion to another doctor willing to perform the procedure.

MPs in the lower house sought to have protections for women, babies and medical practitioners added to the legislation, but the amendments were rejected.

As Catholic influence in Ireland wanes, some hope abortion will be legalized

This year's March for Life reaches a new group: evangelicals