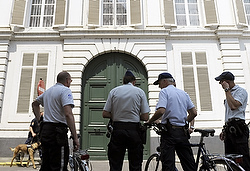 Police officers stand outside the residence of the archbishop of Mechelen-Brussels in Mechelen, Belgium, in 2010. Belgian investigators searched the headquarters of the Belgian Catholic Church, the archbishop's residence as well as the home of Cardinal Godfried Danneels as part of an investigation into alleged priestly sexual abuse. (CNS photo/Eric Vidal, Reuters)

BRUSSELS, BELGIUM -- The week before the start of Advent, four Flemish priests issued a church reform manifesto that called for allowing the appointment of laypeople as parish pastors, liturgical leaders and preachers, and for the ordination of married men and women as priests.

By the week's end more than 4,000 of publicly active Catholics had signed on to the "Believers Speak Out" manifesto. By Dec. 1, the number of signers had reached 6,000.

Among the supporters are hundreds of priests, educators, academics and professional Catholics. Two prominent supporters are former rectors of the Catholic University of Leuven, Roger Dillemans and Marc Vervenne.

"These are not 'protest people.' They are people of faith. They are raising their voices. They hope their bishops are listening," said Fr. John Dekimpe, one of four priests who launched the manifesto.

"Some people are fearful about approaching church leadership," said the priest, who lives in Kortrijk. "Is this being a dissident? I don't think so. The Belgian church is a disaster. If we don't do something, the exodus of those leaving the church will just never stop. ... I really want the bishops to reflect deeply about the growing discontent of so many believers."

Among the manifesto's demands, made "in solidarity with fellow believers in Austria, Ireland and many other countries," are that:

So far there has been no official reaction from Archbishop André-Joseph Léonard, the Catholic primate of Belgium, any of the other Belgium bishops, or the Vatican. Privately, and off the record, one Belgian bishop has applauded the manifesto.

Jürgen Mettepenningen, a Leuven theologian and former press officer for Léonard, told the Belgian newspaper De Morgen that he hopes the manifesto can lead to a well-thought-out church reform. "When I reflect on what I have written and said over the past years, I can only say that the spirit of the manifesto is the very same spirit in which I have been trying to work to make the church more credible: true to the faith."

Last year, after reports of abuse rocked the Belgian church, an independent commission discovered sexual abuse in most Catholic dioceses and all church-run boarding schools and religious orders. The commission said 475 cases of abuse had been reported to it between January and June this year.

In one of the more prominent cases, Bruges Bishop Roger Vangheluwe was forced to resign after admitting to years of abusing his nephew. In April of this year, he told Belgian television that he had molested another nephew and that it had all started "as a game."

The full text of the manifesto, "Believers Speak Out":

Parishes without a priest, Eucharist at inappropriate hours, worship without Communion: that really should not be! What is delaying the needed church reform? We, Flemish believers, ask our bishops to the break the impasse in which we are locked. We do this in solidarity with fellow believers in Austria, Ireland and many other countries, with all who insist on vital church reform.

We simply do not understand why the leadership in our local communities (e.g., parishes) is not entrusted to men or women, married or unmarried, professionals or volunteers, who already have the necessary training. We need dedicated pastors!

We do not understand why these our fellow believers cannot preside at Sunday liturgical celebrations. In every active community we need liturgical ministers!

We do not understand why, in communities where no priest is available, a Word service cannot also include a Communion service.

We do not understand why skilled laypeople and well-formed religious educators cannot preach. We need the word of God!

We do not understand why those believers who, with very good will, have remarried after a divorce must be denied Communion. They should be welcomed as worthy believers. Fortunately, there are some places where this is happening.

We also demand that, as quickly as possible, both married men and women be admitted to the priesthood. We, people of faith, desperately need them now!

[John A. Dick, an American historical theologian, has lived in Belgium for 30 years. He is currently visiting professor of religion in American society at the University of Ghent. This report includes some information from Catholic News Service.]

Franciscans in Tripoli holed up as battle rages

As Kenya's church grows, it works to stand on its own