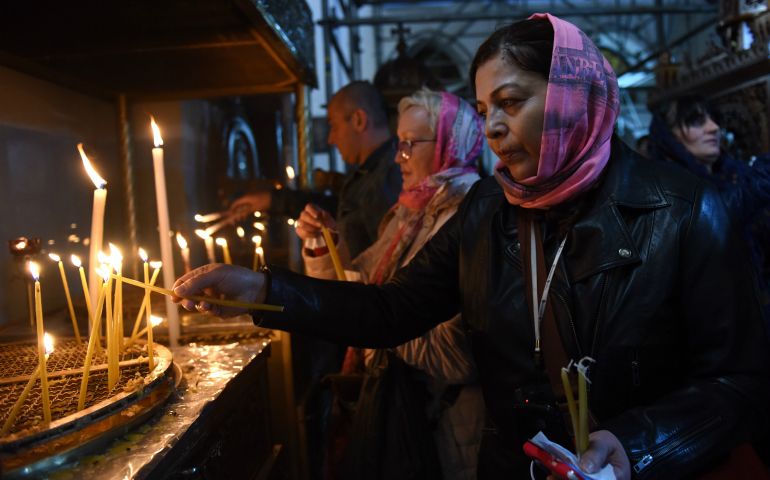 A pilgrim lights a candle Dec. 17 in the grotto of the Church of Nativity in Bethlehem, West Bank. (CNS photo/Debbie Hill)

For the more than a million foreign tourists who visit the Church of the Nativity each year, nothing seems amiss during a quick visit to the birthplace of Jesus. They dash into the basilica with their cameras held aloft and browse the plethora of shops selling Christian trinkets, the same way visitors have done for decades. But behind the touristy sheen, the demographics tell a different story. Bethlehem's Christian population is rapidly disappearing, as Palestinians leave in droves for a better life abroad.

Many people explain that the declining Christian population in Palestine is due to the overall difficulties of living in Palestine, not because of overt discrimination towards Christians. "Even Muslims are leaving; of course, it will not be as evident to see how many Muslims are leaving compared to the Christians, because the Christians are really a minority," said Sr. Lucia Corradin, a Elizabethan sister from Italy who works at the Caritas Baby Hospital.

In Gaza, the situation for Christians is even more precarious. In 2006, there were 5,000 Christians living in Gaza when hard-line Hamas took power from the more moderate Fatah party. Ten years later, there are just 1,100 left, said Samir Qumsieh, the owner of Nativity TV, the only Christian TV station in Palestine, and a researcher focusing on Christian issues.

Walid al-Shatleh, a gym teacher at Talitha Kumi school in Beit Jala, a traditionally Christian village next to Bethlehem, is one of the Palestinian Christians considering emigration. He and his extended family are debating between moving to Canada or Australia.

Al-Shatleh said the Israeli army seized 24 dunams (six acres) of his farmland to construct the separation wall between Israel and the Palestinian territories, cutting down his family's old growth olive trees and ruining his livelihood.

"We feel like there is no future for us in this land," he said. "I can travel to Europe and move freely between countries, even leaving my passport [at the hotel]. But here, I have to show my ID everywhere I go, I have to cross a checkpoint every day," he said. "I can't visit the Church of the Holy Sepulcher, I used to go once a month but now I need special permission."

"We live like we're an animal in a cage in a zoo, there's only one exit and entrance which is a piece of paper from Israeli authorities saying when I can go to Jerusalem and at what time," al-Shatleh added.

Bethlehem mayor Vera Baboun, a Catholic who has led the city since 2012, when she was the first woman elected mayor, said the city is trying to increase tourism. One major initiative is a sorely-needed $17 million renovation of the Church of the Nativity, including work which would reveal the original floor mosaics, among other needed restoration.

According to the Palestinian Ministry of Tourism, 1.16 million foreigners visited the Church of the Nativity in 2013, the most recent year statistics were available.

That same year, about 3.54 million tourists visited Israel. All tourists to Bethlehem arrive from Israel via one of 29 checkpoints that lead to the city and surrounding villages. One of the main complaints among residents is that many tourists come to Bethlehem just for a few hours to visit the church and then immediately get back on the bus to return to Jerusalem, spending very little money in the city. Baboun said the city is considering a tourism tax to ensure some of the tourism dollars are directed back to the city.

Nabil Giacaman, a Catholic shop owner of the "Christmas House" store on Manger Square, said media emphasis on the shrinking Christian population was part of an effort to create an internal divide in Palestinian society. "It's not about Christians and Muslims, it's not that I'm facing these issues only because I'm a Christian," said Giacaman. "As Muslims suffer, Christians also suffer. At the end, we are all Palestinian, we get the same permits and the same treatment at the checkpoints."

Others say the situation is more nuanced.

"Officially, the laws are the same for Christians and Muslims but there is still some racism," said Qumsieh, who noted that most of the prejudice is connected to land ownership, and that people generally try to sell land to others from the same religion.

"I can't see how we have a future with this problem of ongoing emigration," said Qumsieh. "I hope it won't come to be that the Church of the Nativity and the Church of the Holy Sepulcher will become museums, but the fact on the ground is dark and gloomy."

Qumsieh said his own family is a perfect example of this. As one of six highly-educated brothers, four of whom are engineers, Qumsieh is the only one still living in Palestine. His two sons, studying in the United States, laughed in his face when he asked if they were coming back to Bethlehem after graduating from college, Qmsieh recalled.

Qumsieh faulted the Israeli occupation for Bethlehem's struggles, but added that the city also needs to address internal strife, including the stagnant economy. "We need housing projects, we need investors who will employ our youth," he said. "People will stay if they can get a flat and a job."

According to Baboun, the unemployment rate in Bethlehem is 27 percent, the highest in the Palestinian territories after Gaza. Average unemployment in the West Bank is 22 percent.

Part of the obstacle towards economic development is that many of the large infrastructure projects must be coordinated with the Israeli Civil Administration, the Israeli Army, the Palestinian Authority, and the Bethlehem City Council, she said. Much of the city does not have running water, and residents must get water delivered privately. Additionally, there are no wastewater treatment areas in the region, a major environmental issue.

Sr. Lucia Corradin, the Caritas Baby Hospital administrator who has lived in Bethlehem for 13 years, said that whenever she hears of another Christian moving abroad she is disappointed but understanding.

"It's really linked to your freedom, to do what you want, to search for your future," she said. "We have so many colleagues who are resigning to find a better future. What can you say? I think people, before reaching that decision, they suffer a lot. It's a really painful decision. You don't want them to suffer more, you just hope for the best, even for those who are choosing to emigrate and leave this country."

Baboun is hoping that the tourists who throng Manger Square Dec. 24 will acknowledge the difficult realities while still celebrating the traditional Christmas sprit. "Bethlehem is open, and Bethlehem is ringing the bells of joy for peace in the Middle East," she said.

There are now 55 hotels in Bethlehem, Baboun added, hopefully ensuring that, unlike Joseph and Mary, everyone who wants to will find a place at an inn. And despite all the difficulties, there is a certain thrill when she tells people around the world that she is from Bethlehem. "My faith has affected my ability to hope," said Baboun. "I was born and raised in Bethlehem, and I always carry that inside of me."

'Violence begets violence': turmoil and fear in the Holy Land