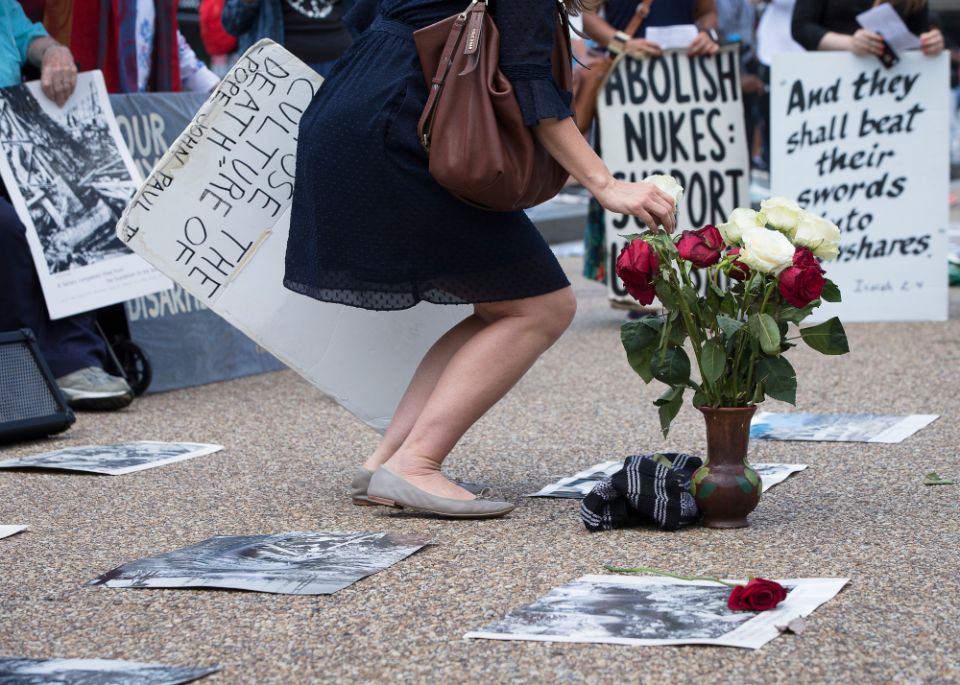 In this 2018 file photo, peace activists hold a Catholic prayer service of repentance near the White House for the use of nuclear weapons on Japan during World War II. Bishops from Japan and the U.S. explored Catholic efforts to end the danger of nuclear weapons during an Aug. 3, 2020, webinar commemorating the 75th anniversary of the nuclear bomb drop on Hiroshima and Nagasaki. (CNS photo/Tyler Orsburn)

Cleveland — The path to true peace requires the world to abolish nuclear weapons, an American bishop and a Japanese archbishop said as the 75th anniversary of the atomic bombings at the end of World War II approached.

Speaking during a 30-minute webinar Aug. 3, Bishop David J. Malloy of Rockford, Illinois, and Archbishop Joseph Mitsuaki Takami of Nagasaki, Japan, reiterated long-standing calls by the bishops' conferences of both countries that the world must reverse the path toward a renewed arms race because of the threat it poses to God's creation.

"As long as the idea that weapons are necessary for peacemaking persists, it will be difficult to even reduce the number of nuclear weapons, let alone to abolish nuclear weapons. It would be ideal if the U.S. and Japan could truly reconcile with each other and work together for the abolition of nuclear weapons," Takami said.

Recalling the words of Pope Francis, who during his visit to Japan in November 2019 called the world to remember its moral obligation to rid the world of nuclear weapons, Malloy said that all nations must "find the means for complete and mutual disarmament based on a shared commitment and trust that needs to be fostered and deepened."

The bishops expressed concern that the world has overlooked the massive destructiveness of nuclear weapons as experienced in Japan in 1945 when U.S. atomic bombs detonated over Hiroshima Aug. 6 and Nagasaki three days later.

Maryann Cusimano Love, associate professor of international politics at The Catholic University of America, hosted the prerecorded online event, introducing it with an overview of Catholic peacebuilding efforts in Japan and the United States.

She said church-based efforts are rooted in Catholic theology, which holds that just peace is possible through a sustained commitment to achieve nuclear abolition. She said the threat of nuclear war has grown in recent years as international arms control treaties have been abandoned and more nations seek to add such weapons of mass destruction to their arsenals.

Takami, president of the Japanese bishops' conference, opened his remarks by explaining how he is a survivor of the bombing of Nagasaki, his hometown and the center of Japan's Catholic faith community. He was in his mother's womb at the time.

"I did not witness the horrific scenes that unfolded immediately following the bombing myself. But my maternal grandmother suffered burns all over her body and died a painful death after one week without receiving any medical attention," the archbishop said.

He recalled that two of his aunts died as a result of the bombing. "My married aunt's body was never found and her husband also died," he said.

Another aunt, a nun, was working outdoors when the bomb detonated. "She was exposed to the hot blast and was in pain for 12 days before dying," he said.

At Nagasaki's Urakami Cathedral, where 24 parishioners were preparing to receive the sacrament of reconciliation when the bomb exploded, little remained standing, he said.

Of the 12,000 parishioners about 8,500 died, the archbishop added. The bombing was "spiritually damaging" to many parishioners, who he said lost their faith and left the church.

Takami drew widely from the words of St. John Paul II, who visited the two cities in 1981, delivering an urgent appeal that all people commit to a future without nuclear weapons.

The speech prompted the Japanese bishops' conference to designate the period from Aug. 6-15 each year as 10 Days of Prayer for Peace starting in 1982. During the time people are called to pray, reflect and act on behalf of peace, he said.

"Pope Francis went one step further and declared that the possession and use of nuclear are immoral," the archbishop added, describing one of the pontiff's address during his visit. "The pope stressed the need for unity and working together toward a world free of nuclear weapons and committed the church to the goal."

In response to Pope Francis' appeal, Bishop Alexis Mitsuru Shirahama of Hiroshima July 7 launched the Nuclear-Free World Foundation in collaboration with three peace organizations to support people working toward the ratification of the Treaty on the Prohibition of Nuclear Weapons, which was approved in 2017 by a majority of United Nations member states. The Holy See became one of the first entities to ratify the agreement.

The fund will support peacemakers' work until 50 nations ratify the pact. Through July 7, 39 nations had ratified it, the United Nations Office for Disarmament Affairs reported.

Malloy said the U.S. bishops remain dedicated to the vision for disarmament expressed in their 1983 pastoral letter "The Challenge of Peace: God's Promise and Our Response."

The document committed the bishops, he said "to shaping the climate of opinion which will make it possible for our country to express profound sorrow over the atomic bombing of 1945. Without that sorrow, there is no possibility of finding a way of repudiating future use of nuclear weapons."

The bombings of Hiroshima and Nagasaki can lead people to understand the "tremendous human suffering and human cost" that can occur when nuclear weapons are used in war, he said.

Malloy also cited the words of Pope Francis in his 2015 encyclical "Laudato Si', on Care for Our Common Home," in which the pontiff called all people to see the world as a gift from the love of God."

Later, in Japan, Malloy added, the pope reminded the world of the threat nuclear weapons pose to creation and to human dignity, thus making their possession and use immoral under Catholic teaching.

The prelates concluded the webinar with prayers in Japanese and English, respectively, seeking peace, reconciliation and understanding among all people.

The webinar was produced by the Catholic Peacebuilding Network and its Project for Revitalizing Catholic Engagement in Nuclear Disarmament and the Berkley Center for Religion Peace and World Affairs at Georgetown University.

God's will is clear: to seek out, save humanity from evil, pope says