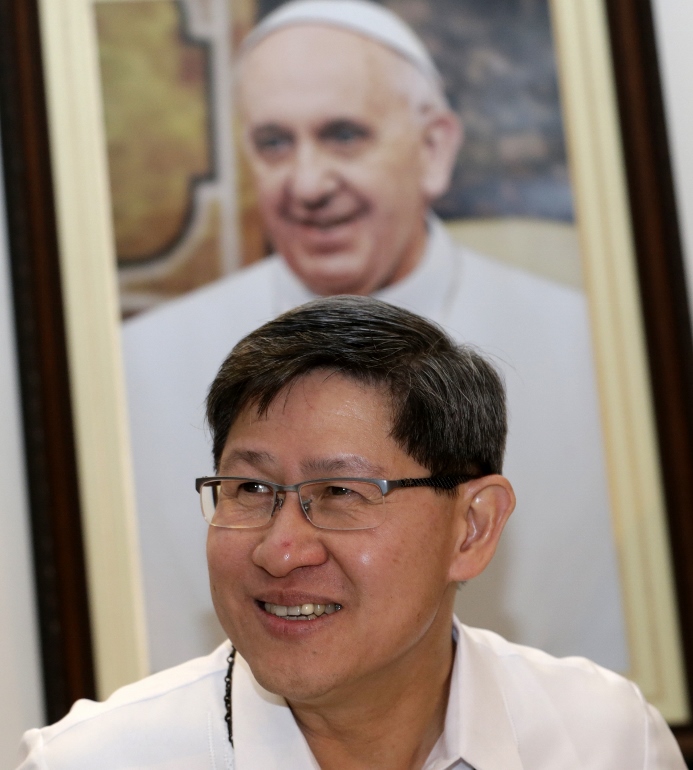 Pope Francis will visit the Philippines from Jan. 15 to 19.

Cardinal Luis Tagle of Manila announced the schedule of the visit in a press briefing Tuesday at the Manila archdiocese headquarters in Intramuros.

"Accepting the invitation of the Civil Authority and the bishops, His Holiness, Pope Francis, will make an apostolic visit to Sri Lanka from January 12 to 15 and to the Philippines from January 15 to 19, 2015," Tagle said.

Pope Francis' visit to the Philippines was formally announced simultaneously in Rome and in Manila. Tagle made the announcement to media after the papal nuncio to the Philippines, Archbishop Giuseppe Pinto*, officially released the information.

Tagle, however, said Pope Francis will make the program of the visit later this year.

Francis had told reporters of his plan to visit the Philippines next year, particularly the victims of super Typhoon Yolanda (Haiyan) in Eastern Visayas, during an in-flight question-and-answer session with reporters while returning from his pilgrimage to the Holy Land.

"I was a witness to how much he was affected by the Typhoon Yolanda that happened November last year," Tagle told reporters.

The cardinal recalled the ceremony for the blessing of St. Pedro Calungsod's mosaic that was to be installed in St. Peter's Basilica last year.

He said because of the typhoon, the whole ceremony became more than just a blessing of an icon. "The Holy Father during that event said plainly that he was one with the suffering people ... that we should not be afraid to ask God why."

Tagle quoted Francis' words of understanding, saying Filipinos have to ask God their question as children ask parents why: "not so much for clear answers but to get the attention of parents."

"Now he is coming to the Philippines, wow! I'm sure that desire of the heart will push him to get in contact with the people," Tagle added.

Earlier this month, the Catholic Bishops' Conference of the Philippines offered the faithful a guide for preparing spiritually for the papal visit.

Bishops' conference president Archbishop Socrates Villegas of Lingayen-Dagupan said the most distinctive way to prepare spiritually for the coming of Pope Francis is for the country to become "a people rich in mercy."

"Let us make mercy our national identity. Trust in God's mercy is part and parcel of our traditional Filipino Christian culture. Let us make the practice of mercy our gift to the pope when he comes to visit us," he said at the time.

"He comes to confirm us in our faith as we face the challenges of witnessing the joy of the Gospel in the midst of our trials. This is an eloquent way of showing mercy and compassion," Villegas said.

The bishops also encouraged Filipinos to resolve to make an act of mercy every day, such as giving food to the hungry, helping build homes for the typhoon victims, visiting the prisoners or the charity ward of hospitals, drug rehabilitation centers, homes for the elderly and orphanages.

Presidential Communications Operations Office Secretary Herminio Coloma Jr. welcomed the news of the pope's upcoming visit, especially since it will mark the 20th anniversary of the World Youth Day in the country in 1995.

"The government joins the Filipino people in welcoming the Vatican's announcement confirming that His Holiness Pope Francis will make an apostolic visit to the Philippines," Coloma said.

"Pope Francis' visit marks the 20th anniversary of the celebration of World Youth Day Manila that was presided over by now-St. John Paul II. Filipinos will most certainly afford to Pope Francis the warmth of their hospitality and manifest the fervor of their faith as they welcome the first pontiff from South America," President Benigno Aquino III's communications secretary said.

"President Aquino is calling on all concerned government offices and the citizenry to work closely with the papal visit committee in ensuring the success of the apostolic visit of Pope Francis," Coloma added.

He said the president designated Executive Secretary Paquito Ochoa Jr. as the government's lead person for the visit.

Pope Francis will be the third pope to visit the Philippines after Pope Paul VI in 1970 and Pope John Paul II in 1981 and 1995.

*An earlier version of this story misspelled Pinto's name.