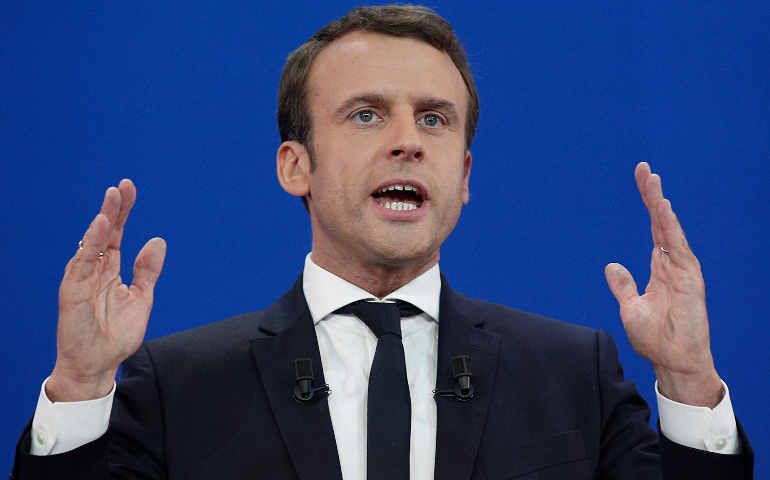 Paris — It is widely agreed here that the 2017 presidential elections were the most uncommon in 40 years of French political life. Apart from the fact that the two dominant parties, the French equivalent of the Democrats and the Republicans, were eliminated as early as the first round, one of the lasting debates of a long and confused campaign focused on the Catholic vote, something that has not been much of a factor in politics here since the election of socialist Francois Mitterrand in 1981.

The confusion in Catholic quarters extends to non-committal statements made by Pope Francis prior to the vote and questions about who will be selected to fill an upcoming vacancy in the leadership of the French church.

To understand this stunning renewal of influence of a Catholic community, which has dramatically shrunk these last decades, it is necessary to revisit the presidency of François Hollande whose mandate expires this week.

A landmark reform of Hollande, a mediocre president, was his success in pushing legislation in 2013 allowing same-sex marriage. To the great surprise of the center left government and its conservative opposition, the debate at the Parliament was followed by an intense polemic and massive crowds demonstrating against the law in Paris and the main French cities. The organizers of this movement were rightist Catholic militants discreetly supported by the national bishops conference. They set up an organization called Sens Commun (common sense) that became the official partner of les Républicains, the main French conservative party.

Before the first round of the presidential elections, François Fillon, the candidate of the conservatives, openly declared his Catholic faith and made clear his reservations on abortion, same-sex marriage and surrogate motherhood. He was clearly seeking the support of the practicing Catholics. They constitute about 15 percent of the voters and, according to polls, 46 percent of them voted for Fillon. It was the first time that a presidential candidate appeared as the spokesman of the Catholic community, and the situation was the subject of a great deal of media commentary. It was then no surprise that Sens Commun became the main organizer of Fillon’s meetings and played a major part in his campaign.

However, the conservative candidate, struck by a corruption scandal, was narrowly defeated at the first round. For the second round on May 7, there remained the centrist Emmanuel Macron and the far right Marine Le Pen, leader of Front National (FN).

This new situation put the Catholics in a quandary. They had hoped that, once elected, Fillon would clarify the ethical dilemmas of same sex marriage, adoption by gay couples and surrogate motherhood. These have become important issues for a Catholic community that has moved steadily to the right during the past 30 years and is more and more demanding on gender matters. In the second round of the elections they had to choose between Macron, a secular candidate, fairly discreet on ethics although his spouse was, for many years, a French teacher in a posh Jesuit school, and Marine Le Pen whose party is openly hostile to abortion and same sex marriage but defends also extreme racist and xenophobic positions.

For the first time, there was between the two rounds of elections, an intense public debate on the Catholic vote. Those who expected a clear position of the La Conférence Épiscopale de France, the national bishops’ conference, which, in 2002, spoke against the Front National as a racist and pagan organization, were sorely disappointed. On April 24, the bishops delivered a statement that was so vague it was impossible to decide what candidate they favored. At the same time, Pope Francis met French journalists on the plane taking him back from Cairo. Speaking of the presidential election, he was strangely cautious, stressing that he did not understand this battle between a “strong right candidate,” meaning Marine Le Pen, and a competitor, referring to Macron, he knew nothing about. Many French observers were surprised that Francis had so little to say about Le Pen, whose positions on immigration and race are totally opposed to his own doctrine.

It seems that the caution of Pope Francis and the bishops’ conference has a lot to do with the lingering debate on various ethical topics. The French bishops were very impressed by the size of the protests against same-sex marriage and they don’t want to be cut off from a growing community of Catholic activists. They certainly sent messages to the Vatican, whose relationship with the Hollande government has been uneasy since the French president proposed an openly gay ambassador to the Vatican.

The last days before the May 7 second round illustrated the divisions inside the Church. Six bishops out of one hundred issued public statements against the Front National, following a joint statement delivered by the three other religions: Protestant, Jewish and Muslim. Moreover, the respected catholic daily La Croix adopted the same position. And yet, Georges Pontier, archbishop of Marseille and chairman of the bishops’ conference could only declare that Catholics should vote “according to their faith.” Many Catholics were disappointed by this kind of evasion and stated publicly their criticism in le Monde and la Croix.

While Macron was elected by a wide margin – 66 percent of the vote to Le Pen’s 34 percent, some polls showed that more than 40 percent of practicing Catholics chose Le Pen. It means that the Catholic community remains deeply divided. The many militants of Sens Commun count on the far right to support their fight against same-sex marriage, abortion and all ethical matters connected to gender and procreation. Some bishops share their opinion. However, there are also many Catholics who believe that Front National racism and hostility to migrants are contrary to the doctrine of the church and cannot be accepted.

It will be interesting, given such divisions, to observe whom Pope Francis will elect to lead the French Church through these perilous times. While the bishops conference elects its own leader, the real head of the church traditionally is the archbishop of Paris, who historically also is appointed a cardinal. It is the archbishop of Paris who most often appears on television as the voice of the church. Cardinal André Vingt Trois, the current archbishop of Paris, turns 75 this November and is required at that point to submit a letter of resignation to the Holy See.

[Antoine de Tarlé is a Paris based journalist and regular contributor to the Jesuit monthly Etudes.]

Young Leaders for Peace teach us to make room for difference

CNEWA trustees meet Lebanese, refugees who benefit from their projects