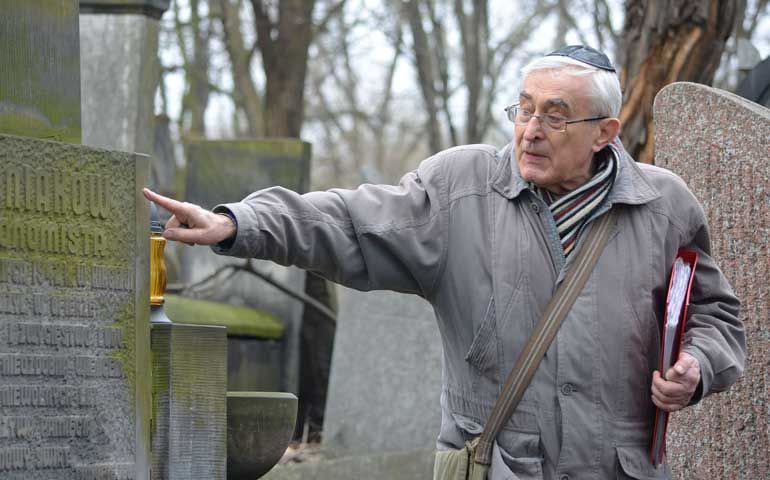 Warsaw, Poland — On Sept. 1, Poles remembered the German invasion of their country that took place 75 years ago, marking the start of World War II. The Holocaust and five years of brutal Nazi oppression followed. The Nazis' murder of 6 million Jews took place, for the most part, on Polish soil.

Jan Jagielski, a 77-year-old Polish Catholic, deals with the legacy of that mass murder each day. A retired chemist, he now works at Warsaw's Jewish Historical Institute in the Documentation of Monuments and Photo Archive. His retirement work reflects his vow to never forget the 3 million Jewish people from Poland who were victims of the Holocaust.

"This is my eternal obligation, to be a guardian of memory," he said during an interview in his Warsaw office. His work helps counter a growing Holocaust denial, especially among the nation's youth, he said. "It was unprecedented. We must remember it."

Most of these friends emigrated in 1956-68 because of the anti-Semitic policies of the communist government. With all his Jewish classmates gone from Poland, he feels an obligation to keep their memory. Jagielski began his own documentation project in the 1960s.

"It was his way to provide an accurate history of what the Germans destroyed and what the communists deliberately suppressed," said Menachem Daum, an American Jew of Polish descent and a staunch advocate for improving the deplorable state of Jewish cemeteries in Poland.

Communist regimes never acknowledged suffering specific to Jews during the Holocaust. This history was taught as fascist oppression of Poles, without any specific Jewish reference.

Jagielski greets visitors with a warm smile. Holocaust survivors and their descendants embrace him. He listens to them patiently and with compassion. During our interview, he greeted elderly survivors with hugs.

"My office is a place where people can come to cry and talk about the past," said Jagielski. "This makes my life worth living. I make time for everyone."

He travels the country to record the location and condition of hundreds of synagogues and the 1,400 cemeteries that served the prewar Jewish population of 3.3 million. He compares prewar pictures with current ones.

Many of the synagogues were abandoned or destroyed by the Germans. Many of the cemeteries were ruined. They are neglected for lack of funds and because there are no Jews left to maintain them. Jagielski helps Jews of Polish descent find cemeteries where their ancestors are buried and also to find their family homes.

"He's a valuable resource because he has visited almost every city, town and village in Poland to gather information about Jewish institutions," said Poland's chief rabbi, Michael Schudrich. "And because he doesn't know how to say no to another human being seeking help."

Jewish visitors come to Poland for historic or sentimental reasons and occasionally to settle restitution claims, and Jagielski helps to sustain their past, said author Konstanty Gebert, a columnist for Poland's largest circulation newspaper and a prominent member of the Warsaw Jewish community.

"He gets great happiness by making a past that many people consider obliterated available," said Gebert. "In a way, it's a small victory over Hitler."

Among the many documents in Jagielski's archives is a small picture of Maria Tyk, age 19, that he found in a box at the Jewish Historical Institute, shortly after he began working there in 1991. Tyk had dated the picture Nov. 24, 1942. On the back was this inscription:

To the eternal memory for the one who will keep my picture, I am writing on the tragic departure from the family town of Strzegowo. Please tell future generations that there were once a people who with full consciousness went to their death, tough people with a great sense of humanity. These people surrendered to the severity of fate. Let my eyes tell you how tragic was my short life.

The next day Tyk was deported to Auschwitz, where she was murdered.

The box of photos was brought to the institute after the war, stored there without notice for 50 years. Jagielski's resurrection of these photos led to a story about the Tyk family in her former hometown newspaper.

Thanks to the work of Jagielski, Tyk's last words were at last published in 2004, 62 years after her murder.

Many Catholics shunned Jagielski's mother because she was divorced, he said. "She always taught me and my brother to respect people of all religions," he said, adding that her emphasis on tolerance and understanding of all people had a profound influence on him.

Ryszard Mostowicz, a longtime friend, summed up the thinking of many who know Jagielski.

"The history of the Jewish people is his passion. It's his life."