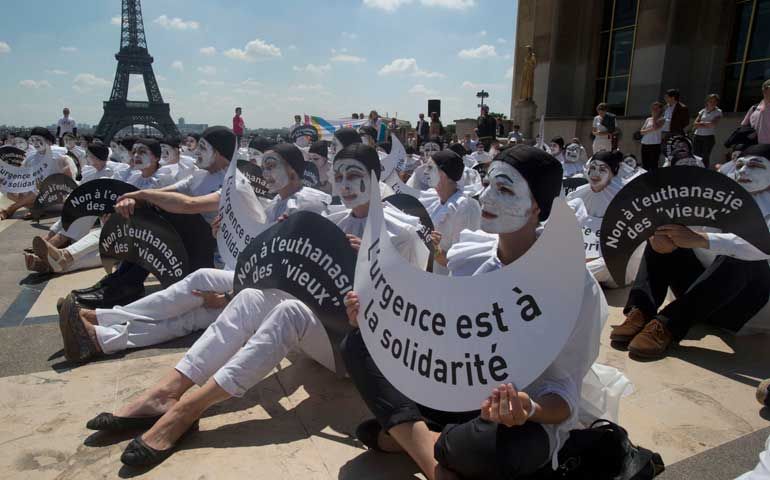 Demonstrators hold placards that read, "No to euthanasia of the elderly," and "Solidarity is urgent," in Paris June 24, 2014. (AP Photo/Michel Euler)

When Belgium's Catholic bishops published a declaration in early March that condemned calls for euthanasia for dementia sufferers, it was the latest bout in a protracted struggle in this traditionally Catholic country.

"Politicians and pro-euthanasia groups are pushing strongly for this new move -- the slippery slope so often talked about is clearly evident now," Auxiliary Bishop Jean Kockerols of Malines-Brussels explained.

"It's another example of how euthanasia has entered the social mainstream here. People seem proud our country is taking the lead in this field," said Kockerols, who is vice president of the Commission of the Bishops' Conferences of the European Community.

Assisted dying and voluntary euthanasia were legalized in Belgium in 2002, a year after the Netherlands. Euthanasia deaths increased by 26 percent from 2012 to 2013 in Belgium, according to Health Ministry data, with more than 1,800 officially registered in 2013 -- an average of five per day.

In February 2014, Belgian legislators extended the law by making their country the world's first to allow doctor-assisted killing of suffering children, provided they were "conscious of their decision" and had made "repeated requests to die."

At the time, church leaders warned the move would transgress "the foundation of human society," and predicted it would "open the door wide to euthanasia's further extension to handicapped persons, people with dementia, the mentally ill and those merely tired of life."

Barely a year later, church leaders see dementia sufferers and Alzheimer's patients now in the frame, and say their words of caution have been justified.

The Jesuit spokesman for the Belgian bishops' conference, Msgr. Tommy Scholtes, said that members of the co-governing Liberal Party, under Premier Charles Michel, have argued the case for extending the 2002 law to permit dementia patients to be euthanized. Scholtes said relevant legislation was expected "in the near future."

He added that support for an extension was especially strong in Belgium's Flemish-speaking provinces, where many believe euthanasia should be made available "not only at the end of life, but also when people are merely old and tired."

"The atmosphere here now is that euthanasia should be made easier. Although there's no law project as yet, it's clear the momentum is building to make this the next step after last year's legislation on euthanasia for children," Scholtes told NCR March 14. "This is why the bishops want to promote a serious discussion now, and why they decided to pre-empt new legislation with their statement."

In a March declaration, published in Belgium's La Libre and De Standaard dailies, the bishops said support for such legislation reflects "preoccupations and personal anxieties," not of dementia patients, but of "third parties," who should instead feel an "ethical responsibility to care for those in need."

"Since the 2002 euthanasia law was passed, the drift predicted at the time has become a reality," they added.

"The law's limits are systematically twisted, even violated, while the queue of patient groups lining up for euthanasia continually increases. Existential suffering, such as tiredness with life, falls outside the competence of medicine. But it is being placed within the ambit of the euthanasia law by people with authority in society."

Kockerols says some members of Parliament questioned the bishops' claim that the 2002 law is being violated, and they prevailed on Belgium's justice minister, Koen Geens, to deny it.

When it comes to most politicians, however, the church declaration looks set to be ignored.

"The fact that there've been few other reactions otherwise could be taken to suggest our arguments are well formulated," Kockerols told NCR. "But the Catholic church has lost so much credibility here because of the recent pedophilia crisis that its voice is being listened to less now. When lay Catholics speak out, they often have a greater impact than the bishops themselves."

That may be true in other parts of Europe, too.

Besides Belgium and the Netherlands, assisted dying and voluntary euthanasia are also legal in Luxembourg and deemed "nonpunishable" in Switzerland, where huge profits have been made by the Zurich-based Dignitas organization, which offers termination to clients from abroad via slick advertising.

Poll data suggests most people across the continent now favor some form of euthanasia law if backed with safeguards.

In the Netherlands, where euthanasia deaths more than doubled from 2006 to 2010, the 2004 Groningen Protocol allows newborn babies with conditions such as spina bifida to be euthanized because of "their perceived future suffering, or that of their parents."

Dutch newspapers say euthanasia is already part of the national culture, helped by prominent personalities who have publicly chosen it, as well as by new rituals such as a last supper before a lethal injection.

According to a February survey in the Journal of Medical Ethics, more than a quarter of Dutch doctors say they would consider assisting in the suicide of a patient who was "tired of living," while one in three would be prepared to help someone with early dementia or mental illness, and 85 percent a patient with cancer.

Three-quarters of doctors and 90 percent of general practitioners had been asked to assist in a patient's suicide at least once. Of the 60 percent who had actually provided euthanasia, almost half said they had done so in the past year.

Euthanasia and assisted dying are not in the competence of the European Union, whose Treaty on Functioning encourages cooperation in health matters, but respects the responsibility of member states for "the organization and delivery of health services and medical care."

Yet pressure to standardize policies and procedures has grown. Several judgments by the European Court of Human Rights have encouraged calls for a Europe-wide right to assisted suicide under privacy clauses in the 1950 European Convention on Human Rights.

In Britain, an Assisted Dying Bill, currently before Parliament, would allow doctors to prescribe lethal drugs to patients who are judged to have fewer than six months to live.

The British Medical Association firmly opposes the bill, but public support for the draft law, the fourth in a decade, appears to be growing.

In Germany -- where last year a monument was dedicated in Berlin to 300,000 victims of a wartime Nazi euthanasia program against the mentally and physically disabled -- efforts are being made to clarify the law after federal judges acquitted a woman in 2010 who had cut off her sick mother's life support in the hospital.

In Spain, euthanasia legislation by the former Socialist government was narrowly voted down in 2007 and 2011. But in neighboring France, "medicalized assistance in ending life with dignity" was a 2012 election pledge by Socialist President François Hollande. A draft law, published just a month after Hollande's victory, currently awaits debate in the Assemblée Nationale.

"We're all worried," France's Catholic daily La Croix commented recently. "We want a society that allows everyone to pass through situations of vulnerability without being branded useless or costly, or having their life's value called in question. ... But what is presented as an individual liberty is now being turned, step by step, into a system for excluding the vulnerable and despairing."

Whatever its credibility flaws, Europe's Catholic church has spoken out consistently against euthanasia. In a March 5 address to the Pontifical Academy for Life, Pope Francis warned against current tendencies for the "elderly and less useful" to be "left to die or made to die" because of their "physical or social condition."

Although only one in 10 Belgian Catholics now attends church, Catholics nominally make up three-quarters of the country's population of 10.4 million. Here, too, however, the church has had a tough job making its voice heard as euthanasia becomes ever more accepted.

In February, a Belgian man serving a life sentence for sexual crimes, Frank Van Den Bleeken, was allowed to choose euthanasia, only to be refused at the last moment when other prisoners filed similar requests.

In early March, a 41-year-old football fan, Lorenzo Schoonbaert, was praised as an "inspiration" in the media after delaying his lethal injection by a day to watch his team one last time.

Reasons given for euthanasia in Belgium have included blindness, anorexia and botched operations, helped by ambiguous legal provisions that say doctors must be "consulted" but need not agree.

Detailed research, published in 2010 by The BMJ, the British medical journal, suggests almost half of euthanasia deaths are left unreported in the Dutch-speaking part of Belgium, and 87.7 percent of those unreported lacked a written request.

A 2010 Canadian study suggests lethal doses are administered by nurses at Belgian hospitals, often under the guise of palliative care. The 2002 law requires that physicians perform the act of euthanasia.

Belgium's 16-member Federal Euthanasia Control and Evaluation Commission, which monitors the law's implementation, has been co-chaired since its creation by a leading euthanasia doctor, Wim Distelmans. To date, the commission has not investigated a single euthanasia death.

In their declaration, the bishops said that Belgian society's "long investment" in caring for the elderly, mentally handicapped and terminally ill was being undermined by the new "climate of euthanasia," directed at "those least able to make their voices heard."

Although personal autonomy was important, it shouldn't give way to an "excessive individualism," the bishops warned. Nor should the loss of autonomy be seen as "synonymous with a loss of dignity."

"There is a real danger that we will end of restricting the idea of humanity, and the rights it confers, to those capable of recognizing the value of their own life for and by themselves," the declaration said. "Those who cannot, or who no longer can, risk being eliminated."

If the call for euthanasia to be allowed for dementia sufferers goes ahead, Kockerols says the Catholic church will ask Protestant and Orthodox leaders to help campaign against it -- just as it joined with Muslim and Jewish leaders in condemning last year's child euthanasia amendment.

Even within the Catholic church, there are clergy and laity who support euthanasia, as well as those who've asked for the Eucharist and sacraments when preparing themselves for a lethal injection, he said. Devising a pastoral response to questions like these is now an urgent priority.

"I'm not particularly proud to be Belgian today -- and it's sad we're now continually being linked to issues like this," Kockerols told NCR.

"We know other countries will be looking to us and using our policies and practices as a model, and citing us as a precedent for demanding similar measures in other parts of Europe. This is makes it vital, whatever the odds, to go on taking a firm public stand."

[Jonathan Luxmoore is a freelance writer covering European church news from Warsaw, Poland, and Oxford, England. His latest two-volume book, The God of the Gulag, will be published in 2015.]

World | Catholic leaders: Fears of 'slippery slope' of euthanasia in Europe are justified