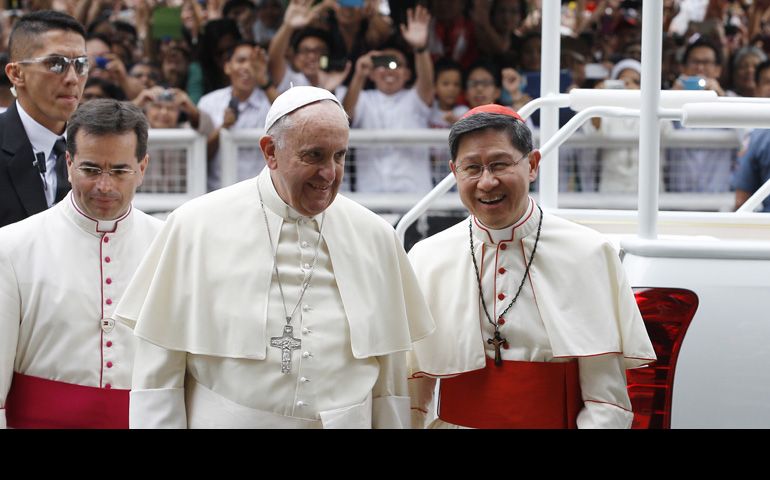 Pope Francis and Cardinal Luis Antonio Tagle of Manila arrive to celebrate Mass in Manila, Philippines, Jan. 16. At the first pan-Asian conference of Catholic moral theologians, Tagle said July 20 that Francis sees the future of the church in Asia.

Bangalore, India — The first pan-Asian conference of Catholic moral theologians convened here in July to seek ethical responses to the region's fundamental issues and to help the church exist as a minority group in a multicultural and multireligious environment.

During the four-day conference, which concluded July 20, about 50 theologians presented scholarly papers dissecting the current scenario in the region, which accounts for half the world's population.

The conference, called "Doing Catholic Theological Ethics in a Cross-Cultural and Interreligious Asian Context," drew 95 moral theologians from around the world as well as some 300 seminarians and their professors.

Boosting their morale on the concluding day, Filipino Cardinal Luis Antonio Tagle of Manila disclosed that Pope Francis sees the future of the church in Asia. The 58-year-old cardinal said the pope made the comments when they were discussing Tagle's recent appointments to international church bodies.

Since March, Pope Francis has approved Tagle's election of as president of the Catholic Biblical Federation and president of Caritas Internationalis, the first Asian to hold the post.

Tagle, who addressed the conference on "Church and leadership in cross-cultural and interfaith Asian context," noted that the church is moving toward regions such as Africa, Asia and Oceania. The audience began to applaud the remarks, but Tagle cautioned them.

"Places of deep suffering and pain have become the center of gravity of the church life and for reflection," he added.

"Please do not clap," he said. The papal expectation for Asian churches "is not a matter of honor. It is a great responsibility, a great mission, for us."

Indian Cardinal Oswald Gracias of Bombay had expressed the same sentiment earlier, when he requested the theologians help the church in Asia to find answers to the socioeconomic, religious and moral issues confronting the region. The 70-year-old cardinal, who led the Mass on July 18, reiterated the need to engage in a "threefold dialogue" promoted by the Federation of Asian Bishops' Conferences (FABC).

Gracias, FABC president and one of the eight cardinals who advise the pope on the management of the universal church, asserted that dialogue with Asia's poor, cultures and religions will help the church discover its identity and forge bonds of unity and build community in the Asian context.

Such a dialogue would force the church to confront the region's complex issues and problems like sexual violence against women, forced migration, religious fundamentalism, threats to democracy, fertility tourism, and land grabbing by corporate houses.

The theologians scrutinized all this and other related matters through 14 papers presented at plenary and 36 papers at concurrent sessions.

Redemptorist Fr. Vimal Tirimanna, who teaches theology at colleges in Sri Lanka and Rome, reminded attendees that the FABC has tried to teach how to live Christian life in the region since the federation was formed in 1972.

The Sri Lankan theologian, in his keynote address, regretted that most Asian theologians have failed to take FABC indications seriously and continue to walk along "the beaten track of the classical Western moral theology."

"This is obvious if one were to glance through the syllabuses of Asian seminaries and other theological institutes where moral theology is taught and studied," he said. "Even in their writings, the majority of Asian moral theologians seem to be locked inside the Western classical framework of moral theology."

The “classical European theology,” he explained, perceives faith as a body of truths and dogmas and uses philosophy to explain them. Asian theology, on the other hand, starts with experience of the faith and analyzes concrete situations with the help of sociology, psychology and anthropology, along with Asians resources.

What matters to the bishops in Asia, Trimanna said, is the daily experiences of their people rather than “purely abstract theological concepts.”

Interfaith marriages are an "unavoidable reality" in multireligious Asia, posing both opportunities and challenges for evangelization in the region, he said. He wants theologians to help the church find "pastoral ways to protect the faith" of Asian Catholics who enter into such marriages.

The same idea cropped up when a Missionaries of Precious Blood priest from India spoke on interfaith marriages at a concurrent session. Fr. Maria Michael Peters noted an increase in marriages between Catholics and persons of other faiths in Asia, but little has been done to provide pastoral care to couples who married under disparity of cult dispensation, he said.

The conference was organized by the association Catholic Theological Ethics in the World Church and its Asian Regional Committee, along with the management of the venue Dharmaram Vidya Kshetram (garden of virtues knowledge temple), a pontifical athenaeum for philosophy, theology and canon law.

Archbishop Bernard Moras of Bangalore, who opened the conference, said that in the contemporary world, theology must be studied and applied in in a cross-cultural and interreligious way. In the Asian context, that is an imperative, not an option, he said.

Fr. James Keenan, an American Jesuit and chief organizer, told NCR that the conference was part of preparation for the Third International Cross-cultural Conference for Catholic Theological Ethicists in 2018.

Keenan stepped into the job after Jesuit Fr. Lucas Chan of Hong Kong died of cardiac arrest May 19 at Marquette University in Milwaukee, where he was teaching. "Lucas had done everything for this conference," Keenan added.

Fellow theologians' love and respect for the 46-year-old was seen at a memorial for him held July 18. His companions shared how he had meticulously planned the first meeting of moral theologians. He became the first Chinese Jesuit to work outside the province when he was assigned to Cambodia.

Catholic Theological Ethics in the World Church announced the launch of a new book series in Chan's honor, Asian Theological Ethics, as well as a scholarship in his name for doctoral studies in biblical ethics at Dharmaram Vidya Kshetram.

Kristine Heyer, a theology professor from the U.S. and a planning committee member, said Chan wanted younger scholars to attend the conference. The majority of the participants were below 50, she noted.

Keenan, who teaches at Boston College, said the conference was part of Catholic Theological Ethics in the World Church's overall vision of linking theologians to one another. He said the association had a similar meeting in Nairobi, Kenya, in 2012 for Africans and another one in Krakow, Poland, in 2014 for Europeans.

"Our strongest networks are in Asia and the U.S. We feel confident in Asia," he added.

While the Nairobi conference was mainly to welcome eight women who were studying for their doctorate in moral theology sponsored by the theological group, the Cracow meeting tried to bridge the gap between Eastern and Western Europeans.

"In Asia, we do not have to bridge gaps," Keenan said.

"There is a pan-Asian identity now. A Vietnamese would say he is both Vietnamese and Asian. There is a growing fascination for what is happening in other countries," he added.

Fr. Maurice Nyunt, the lone participant from Myanmar, said he was happy the conference had expressed the universality of the Catholic church.

Nyunt, executive secretary of the Catholic Bishops' Conference of Myanmar, told NCR that the meeting addressed social and environmental problems that were common in most Asian countries. The biggest problem in his country, he added, was deforestation, which has filled rivers with mud, causing floods and innumerable suffering for the people.

His concern, he said, is how the conference discussions would reach people at the grassroots.

[Jose Kavi is the editor-in-chief of Matters India, a news portal started in March 2013 to focus on religious and social issues in India. This article is part of a collaboration between NCR's Global Sisters Report and Matters India.]