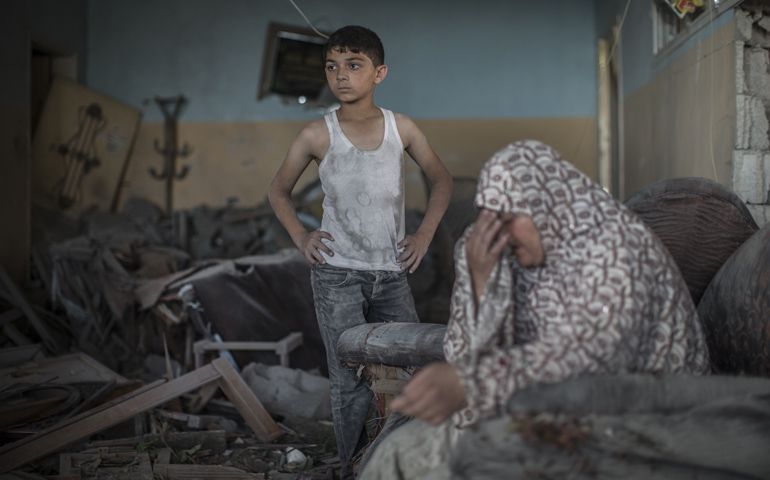 A Palestinian woman cries while sitting next to her son Thursday in their Gaza City house, which was badly damaged in an overnight airstrike by Israeli Defense Forces. (CNS/EPA/Oliver Weiken)

Vatican City — Civilians in Gaza used a brief cease-fire to spill onto the streets and replenish scarce supplies, some church representatives said.

The temporary end of hostilities Thursday was to facilitate moving desperately needed aid into the area as well as give those who could leave a chance to escape, said the Vatican's Fides missionary news agency.

Three foreign Sisters of the Institute of the Incarnate Word were to leave Gaza after Israeli missiles destroyed a home very close to Holy Family Church, the territory's only Catholic parish, the agency said Thursday.

However, the parish priest, Fr. Jorge Hernandez, was staying as well as sisters of the Missionaries of Charity and the 28 disabled children and nine elderly women in their care, it said. The Argentine priest and sisters had carried the children from their facility to his parish after bombing threats in their area.

Hernandez said crime was on the rise and that "young children are beginning to get sick because of fear, stress, shock waves and for the continuous noise" from the airstrikes.

Fides reported that people had used the lull in the bombings Thursday to leave their homes to get money from the banks and buy basic necessities.

The five-hour "humanitarian truce" between Israel and the Palestinian Hamas group came after the Israeli Defense Forces launched an air offensive into the Hamas-controlled Gaza Strip in early July in response to Hamas militants lobbing missiles into Israel.

Media reported Thursday that more than 220 Palestinians, mostly civilians, had been killed and more than 1,500 injured in the 10 days of bombings.

Fr. Raed Abusahlia, a priest in Ramallah, West Bank, and general director of Caritas Jerusalem, told the radio that more than 400 homes in the densely populated Gaza Strip had been completely destroyed and 1,000 more damaged.

Even though Israel warned Palestinian residents in northern Gaza to evacuate the area if they wanted to avoid the airstrikes, Abusahlia said many people did not leave, over fears "their houses will be completely destroyed."

Hamas asked people to stay, he said, because if residents leave, "they will give the green light to the Israelis to invade these areas, and they will destroy everything they see in front of them."

"We saw this in previous wars, unfortunately, and this is happening [again]. For this reason, they prefer to remain in their homes and, sometimes unfortunately, risk their lives," Abusahlia said.

The priest called for a permanent end to all aggression by both sides, saying the constant conflict and blockade have left so many people, especially women and children, suffering.

"We just finished one month ago the emergency (response to) the war of 2012," he said, and now, "unfortunately, we have to start again, again and again."

The priest called on all Christians around the world to dedicate July 20 to prayers for peace.

Msgr. David Jaeger, an Israeli-born Franciscan, told Vatican Radio on Thursday that Christians around the world must pressure their governments to promote a peaceful resolution to the Middle East conflicts.

"We know that the church, a minuscule minority, can have no influence in the Holy Land," he said.

But Catholics and Christians who do have some clout in their own nations "can and must exercise significant influence on their own governments, to keep them strongly engaged," said the priest, who now works at the Vatican's top court of the Roman Rota.

Ways to advance the Palestinian cause in America

'Violence begets violence': turmoil and fear in the Holy Land

Churches' official: 'Everyone in Gaza considers themselves a target'