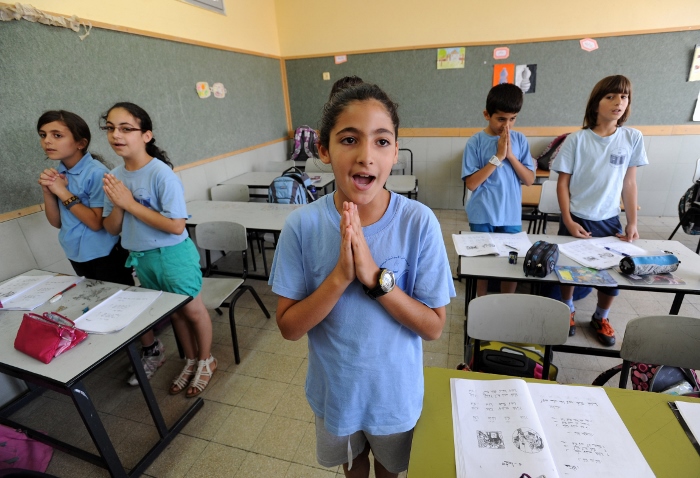 Israeli-Arab fourth-grade students pray in Aramaic during language class in 2012 at Jish Elementary School in Israel. Dozens of Christian schools in Israel may be shutting their doors this coming school year due to increasing restrictions by the Israeli government, Christian educators warn. (CNS photo/Debbie Hill)

Dozens of Christian schools in Israel could be shutting their doors this school year, but a Catholic priest is hoping a meeting with government officials can avoid that.

Christian educators warn that funding discrimination by the Israel's Ministry of Education may force the closure of about 48 Christian schools, affecting some 33,000 pupils — roughly half Christian, half Muslim — who attend the institutions.

Many of the educational institutions existed before Israel's founding in 1948 and have excellent academic records countrywide.

Educators on the Christian schools committee said they have withstood prodding by the Education Ministry for the schools to become part of Israel's officially recognized school system. Such a move would mean losing the schools' Christian identity, ethos and the ability to teach Christian values.

"The Education Ministry is financially strangling the Christian schools that have existed for hundreds of years," said Franciscan Fr. Abdel Masih Fahim, president of the committee of Catholic schools.

But Fahim told Catholic News Service he is expecting something positive to result from a meeting expected with Israeli Education Ministry officials Aug. 23.

"We are waiting for a solution. All children in Israel should have their rights from the government," he said via telephone from Ramla, Israel.

While Christian schools and those of the Jewish ultra-Orthodox are recognized by the state, they are not part of Israel's official educational system. This allows them to create their own curriculum according to their religious beliefs and values, appoint their own principals and teachers and have authority over their own buildings.

But that's where the similarities end. Israel's Education Ministry provides 100 percent funding for 200,000 ultra-Orthodox students in religious, nonpublic schools, but has whittled its finance of Christian schools over the past decade down to about 34 percent, Fahim said, quoting a study by Israel's parliament.

"We want 100 percent funding for all children," the priest said. He said that Christian schools also do not receive the new technology available elsewhere.

Despite the challenges, Christians have reportedly earned the highest rate of success in Israel's matriculation exams, known as Bagrut, which largely determines who is admitted to a state university.

"The Christians schools are following the curriculum of the Ministry of Education, but that is not the case with some of the other schools," Fahim added.

Meanwhile, a 1993 agreement between Israel and the Vatican also sets down a promise by Israel not to change the status quo of the church's institutions in the Jewish state.

Another member on the committee of Christian schools, the Director General of the Nazareth Baptist School, Boutros Mansour, said that as the Education Ministry has been cutting back year by year on funds that should be allotted to Christian schools, the schools have been force to raise tuition by some $6,350 per student per year. However, many families find it difficult to afford the price hike.

This year, the Education Ministry tightened the restrictions further by stipulating that a limit of $3,528 per pupil per year is the maximum amount schools are allowed to charge parents.

Some Christians see this move as the government trying to press the Christians schools into becoming public schools.

"If this is the case, the whole Christian faith emphasis would be lost," Mansour told CNS from Nazareth.

He said Christian schools provide an "important base of establishing Christian identity in Israel."

"Without them, he said, "there is almost no social identity," aside from church.