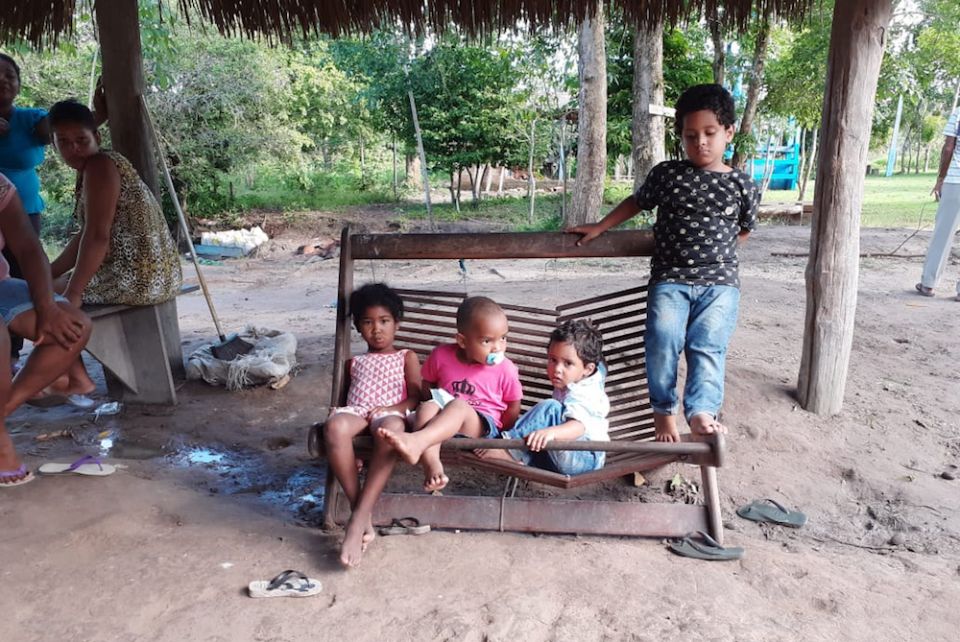 SAO PAULO, Brazil — Amid growing hostility towards indigenous people and other minorities in Brazil, the Catholic Church is making an effort to strengthen its presence among quilombolas, the descendants of African slaves who formed centuries-old communities that are now struggling to remain alive.

The National Conference of Bishops of Brazil created a working group a few years ago to reflect on the church's challenges in order to fortify its activities in quilombola communities, gathering scholars and priests to think on their needs and on possible strategies.

The group published an initial study in 2013 and now, according to one of its members, Fr. Ari dos Reis, has reunited to issue a final guide concerning the pastoral actions of the church. Reis told NCR that the document shall be published this year, in a moment of great distress for quilombolas in Brazil.

"Quilombola communities are much vulnerable now due to a total lack of political support. The current federal administration doesn't care about them," said Reis, making reference to President Jair Bolsonaro's policies.

Bolsonaro declared on several occasions that he wouldn't approve new land rights' requests from indigenous and quilombola communities during his tenure. Both the Brazilian Constitution and a decree promulgated in 2003 established the quilombolas' right to be granted the ownership of their traditional lands, but only a small part of the existing communities had success in this process.

Bolsonaro's rhetoric against traditional peoples in Brazil has been at times unreservedly aggressive. In 2017, when he was a congressman and a pre-candidate for the presidency, he said during a speech at Rio de Janeiro’s Hebraica Club: "I visited a quilombo [settlement] and the least heavy afro-descendant weighed seven arrobas. They do nothing! They are not even good for procreation." Arrobas are a weight unit used for cattle in Brazil, and one arroba is the equivalent of  about 33 pounds.

At the end of November, Bolsonaro appointed the black journalist Sérgio Camargo as the new president of the Palmares Foundation, the governmental agency which is in charge, among of other things, of officially recognizing quilombola communities. Camargo had affirmed on his Facebook account that there's no "real racism" in Brazil and that "slavery was beneficial for the descendants [of slaves]," given that "Black people in Brazil live better lives than Black people in Africa," according to a story published by the newspaper Folha de S. Paulo. Camargo's nomination was challenged in court in December, and he's currently forbidden to assume his post.

"All this caused much anguish among quilombolas. It corresponds to an institutional threat to their communities," said Msgr. Fabrizzio Fonseca of the Diocese of Araçuaí, in the State of Minas Gerais, a region that encompasses dozens of quilombola communities. 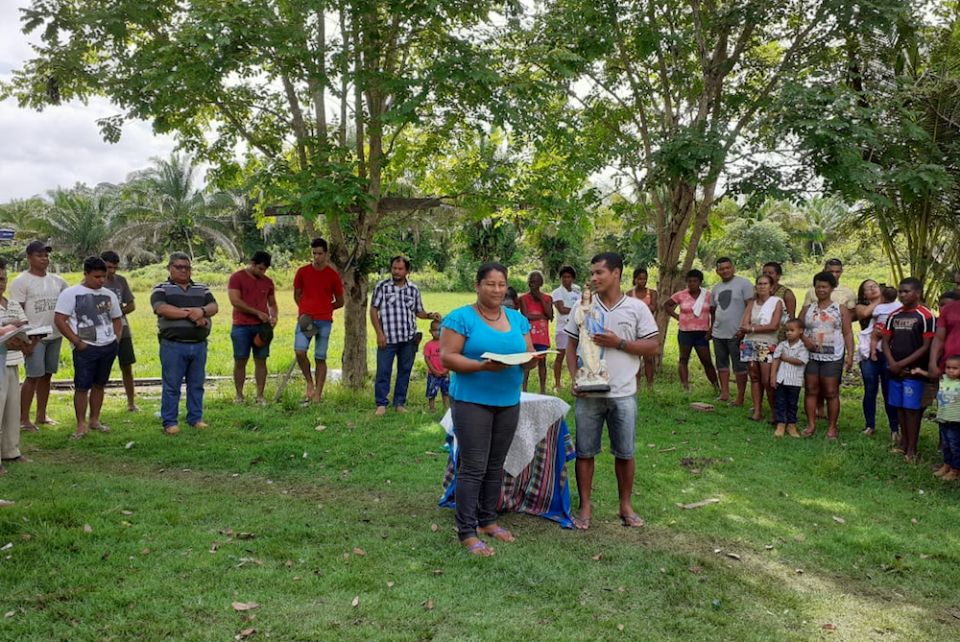 People pray at a Feast of Our Lady of Immaculate Conception ceremony at the Quilombo do Jesus in Brazil. (Maria Berenice de Azevedo)

The church's concern with the quilombolas, beyond humanitarian reasons, has religious foundation. Fonseca explained that the quilombola communities in his region are historically Catholic. "Every community has a small chapel and celebrates the Word on Sundays, even if there's no priest," he said. "This is an area that was mainly evangelized by lay people since colonial times and developed a religious practice based on devotion to saints, collectively praying the rosary and organizing festivities."

That seems to be the case in different regions in the country. According to the anthropologist Liliana Porto, a professor at the Federal University of Paraná who investigates the religious dynamics of the quilombolas, Catholicism is their faith par excellence. "It's a black kind of popular Catholicism, which incorporates black music, devotion to black saints and a black worldview," she said.

During colonial (1530-1822) and imperial times (1822-1889), quilombos were generally formed by slaves who escaped from their masters. But those settlements could also be the result of the economic decline and subsequent abandonment of an entire region — a situation in which slaves could simply be left behind. "Quilombola communities could also be formed when a slave owner left his land to his slaves when he died," said Porto. Interrelations between quilombolas and indigenous communities were common. 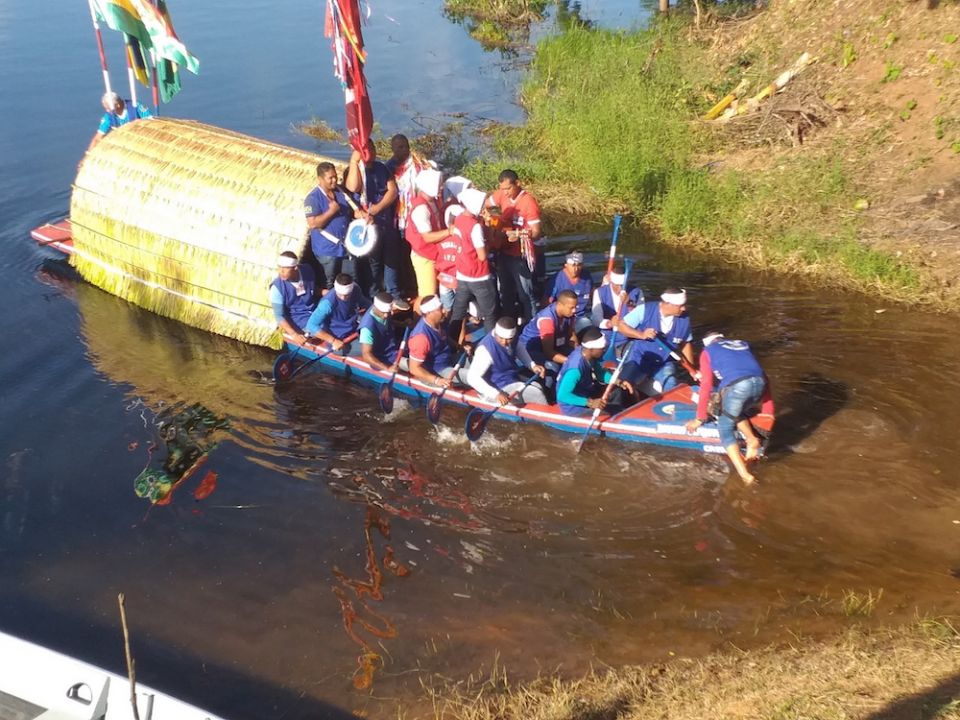 Nine quilombola communities from Rondônia state in Brazil join together for the Feast of the Divine Holy Spirit, which includes a river procession of 50 days, starting after Easter. (Angilene Balbino)

Frequently, quilombolas settled in faraway territories that couldn't be easily reached. Given the overall absence of priests in most regions of the countryside throughout history, such settlements rarely saw members of the clergy. "So those were extremely pious social groups, but they always suffered with a historical deficit in the presence of the institutional church," said Reis.

Porto explained that the quilombolas developed their own Catholic system of beliefs throughout the centuries, identifying their sufferings as a people with Christ's martyrdom and considering black people as especially protected by Mary. "They interpret their daily lives through the lenses of this non-romanized Catholicism, which includes the presence of spirits, the risks of sorcery, and special rites of protection during festivities," she added.

Indeed, feasts continue to be a major element in the quilombola spirituality. In the Amazonian state of Rondônia, in the Northern part of Brazil, nine quilombola communities join efforts each year to organize the feast of the Divine Holy Spirit, which includes a river procession of 50 days starting right after Easter Sunday. 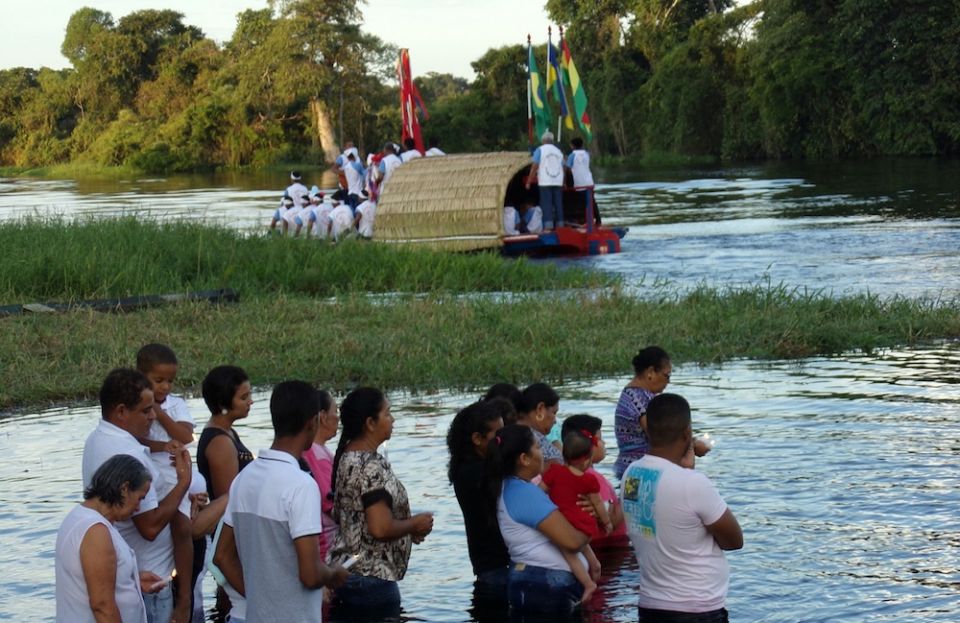 People pray at the river as a processional boat passes during the Feast of the Divine Holy Spirit in Porto Murtinho, Brazil. (Daniel Medeiros) 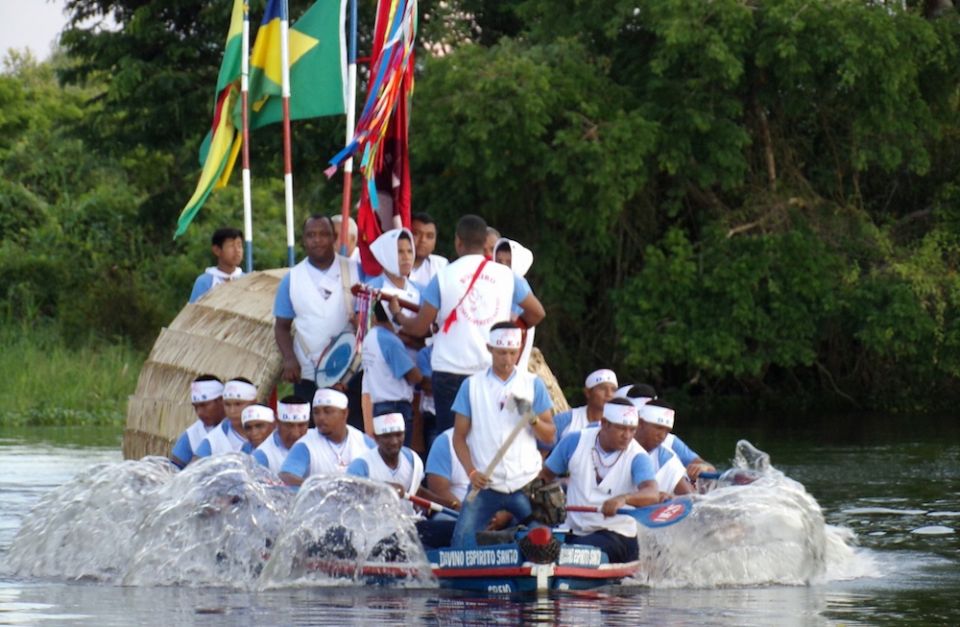 People row the processional boat for the 2019 Feast of the Divine Holy Spirit, celebrated by the quilombola community Porto Murtinho, Brazil. (Daniel Medeiros)

"That's our great festivity, which gathers all communities of the River Guaporé valley, even indigenous groups. But we also have our smaller feasts in honor of patron saints. My great-aunt, for instance, organizes every year the festivity of Our Lady of Mount Carmel," 39-year-old teacher Angilene Balbino, a member of the quilombola community Rolim de Moura do Guaporé, told NCR.

Balbino explained that her community was founded 200 years ago by slaves that fled farms in the State of Mato Grosso. "They sought strength in their faith. Without the clergy, they developed an autonomous religiosity of prayers and processions. These aspects are constitutive of our culture," she affirmed.

Balbino's and the other eight communities in the state are assisted by the Pastoral Land Commission (CPT, in Portuguese), a committee of the bishops' conference that helps peasants and traditional communities in matters related to land conflicts.

"Only two communities have been partially granted their land rights. They all suffer with invasions by illegal loggers and land grabbers," Maria Petronila Neto, a CPT pastoral agent, told NCR. The commission's strategy is now to unify the struggles of quilombolas, indigenous peoples and rubber tappers for land, she explained.

The voice of the quilombolas was heard during the Synod for the Amazon and many communities hope to see concrete changes in their dialogue with the church. "The access to our communities is very difficult, and we get completely isolated during the rainy season. The way is to improve our autonomy," analyzed Balbino.

Her community is visited by a priest every now and then and is currently able to receive the sacraments with regularity. "But it would be very good for us if we could count on viri probati [married priests]," she declared. 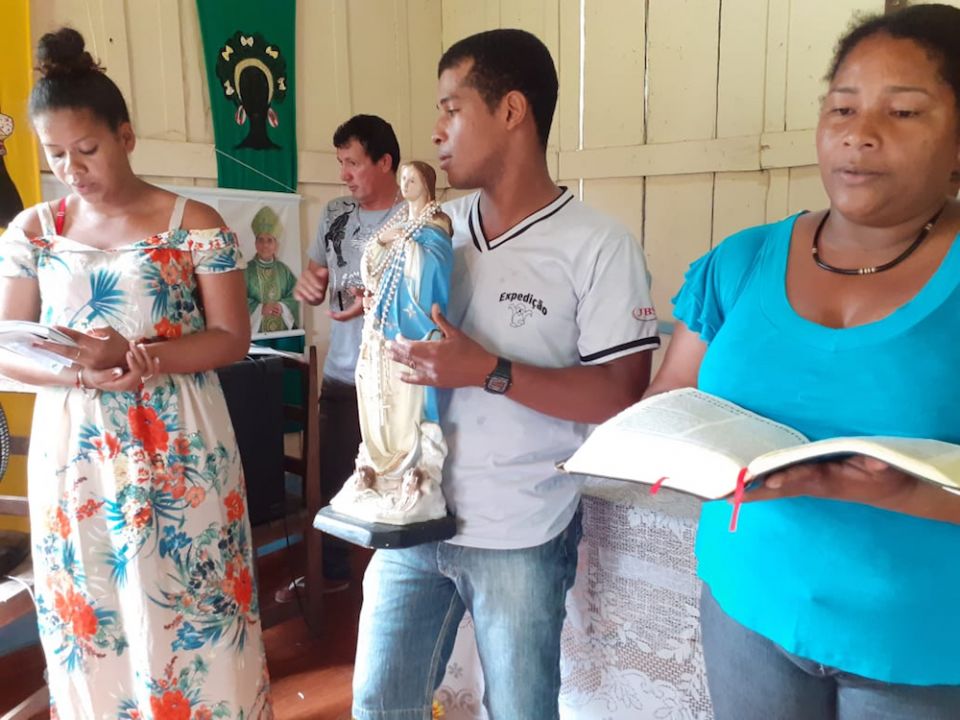 People pray inside the chapel of the Quilombo do Jesus community for the Feast of Our Lady of Immaculate Conception. (Maria Berenice de Azevedo)

According to Reis, commissions such as the CPT play an important role in the dialogue with quilombola communities, but there are also very positive local initiatives that should be identified and replicated. "Our document brought an ecclesial visibility to these groups. The church must be their ally in the defense of their territories and has to support their protagonist action in this process," he argued. "We have to keep working to increase the church's presence among quilombolas. The sociopolitical context so requires."

[Journalist Eduardo Campos Lima is a Ph.D. candidate at the University of São Paulo, Brazil. Between 2016 and 2017, he was a Fulbright visiting research student at Columbia University.]