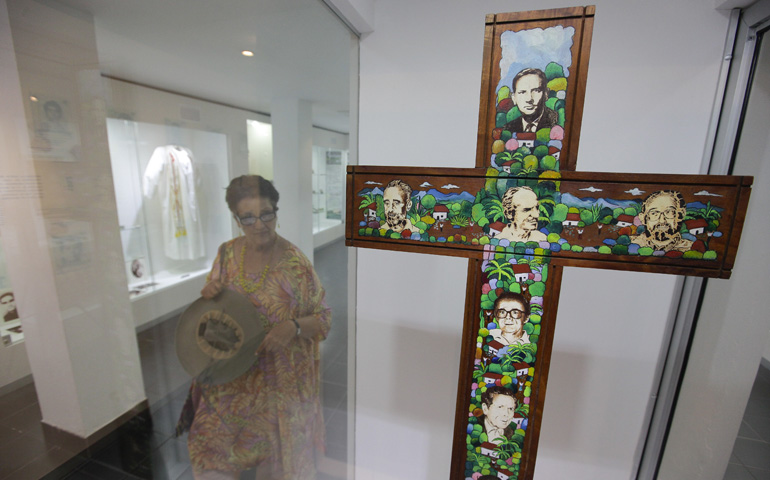 A tourist visits in 2012 a museum at the University of Central America with the personal effects of the six Jesuit priests killed by the army in 1989 in San Salvador, El Salvador. (Newscom/EFE/Roberto Escobar)

Sunday marks the 25th anniversary of the massacre at the University of Central America in San Salvador, El Salvador. On Nov. 16, 1989, a Salvadoran military squad entered the campus, where they shot and killed Jesuits Ignacio Ellacuría, Ignacio Martín Baró, Segundo Montes, Joaquín López y López, Amando López and Juan Ramón Moreno, as well as their housekeeper, Elba Ramos, and her daughter, Celina.

This is the first of two articles that look back on the event and its ramifications.

Curfew lifted at 6 a.m. I grabbed a taxi from the hotel with three other reporters and headed for a neighborhood of San Salvador called Zacamil, where guerrillas had taken control. It was the fifth day of the Farabundo Martí National Liberation Front (FMLN) offensive in the capital, the biggest military challenge to the U.S.-supported government in nine years of civil war, and we hoped to get interviews with rebel commanders.

Within minutes of leaving the taxi, however, we came under sniper fire. We dashed from car to parked car along the street to put metal between us and the shooter.

Eventually I stopped, huddled close to the ground, wrestling with emotions, debating whether to go ahead with the others or turn back. I had to overcome the idea that my colleagues, all men, were moving forward while I, a woman, was not, and what that might mean to others and myself. I decided to follow my gut and turn back. I headed for the news offices at the hotel to find out what events were unfolding. A Jesuit Refugee Service volunteer, an American I knew, stopped me outside the hotel door.

"They killed Ellacuría," he said.

A colleague from the BBC and two other radio correspondents came up to us. We reporters did not assume Jesuit Fr. Ignacio Ellacuría, theologian and rector of the University of Central America José Simeon Cañas, was dead. The volunteer had heard the news from someone else, and rumors that Ellacuría had been killed circulated from time to time, a trick of misinformation or wishful thinking aimed at sowing distress during war. Ellacuría actively promoted a negotiated -- not military -- solution to the conflict, and had the ear of both rightist President Alfredo Cristiani and the FMLN.

"We should go anyway," said the BBC reporter.

We jumped into his jeep, its roof punched with holes from balas perdidas, fallen bullets, and drove for about 15 minutes through an eerily quiet city to the side door of the university's campus. A government soldier stood in a sentry box across the street but did not challenge us. We knew the Jesuits' residence lay just inside the campus wall. We knocked on metal doors and identified ourselves.

Inside on the grass a few feet from the residence lay the forms of four bodies covered with white sheets. What appeared to be blood stained some of the sheets. On stairs and a small porch, several men in priests' robes stood facing the grass, some elderly and two very young. They looked solemn. It was sometime after 7 a.m. We had been the first reporters to arrive. My colleagues, microphones out, began interviewing the clerics on the porch. Fr. José María Tojeira, the Jesuit provincial for Central America, known to us as Chema, stepped across the grass and ordered me -- that is what it felt like -- to follow him into the residence.

In a hall with doors open to rooms on both sides, a body lay face down on the floor. A strip of what looked like blood marked the floor, as if the body had been dragged. Chema bade me step inside one of the rooms, where another man lay dead. He watched as I wrote in my notebook but seemed to be burning with urgency. "There is more," he said.

We stepped outside past the white sheets and turned to descend a few steps to stand at the open door of a small apartment. Inside lay two bodies, a woman and a young girl, fallen backward a few feet from the threshold. It was the cook and her daughter, Chema said. I found it difficult to control my hand, scrawling wildly over the notebook page. "Blood to the roof," I wrote. I recorded how the girl's pelvic area looked as if the killer had emptied his gun there, how the woman's legs had fallen over the girl's, as if she had stood in front when the killers entered.

At that moment, the journalist in me disappeared. I had a 3-year-old daughter at home. I saw before me another mother, unable to protect her child. I can't go on, I thought. At the same time another voice inside said, "You're here to do a job, and if you can't do it, you have no right to be here."

We walked up to the yard again and I saw that two Salvadoran photographers I knew well had arrived. "Father, you have to take the sheets off the bodies," I said to Chema.

He looked alarmed. Then his face changed, and he said, "You must promise me these pictures reach the Jesuits."

That is when I guessed that Tojeira, and perhaps the others, assumed we stood not in the aftermath of a massacre but in the midst of one. Were the killers bent on eliminating all the local Jesuits? The days were chaotic. The army was feeling pressure. Anything could happen.

"Father, I guarantee you a few minutes from now these pictures will be making their way around the world," I said.

The sheets came off and there in death were the priests I had known in life. My first reaction surprised me. What I was seeing was inevitable, I thought, given what I knew of the men. Every interview or encounter I had ever had with them had told me they saw life through the eyes of the poor and demanded justice in this world. Their consistency had led to this moment.

I looked at them one by one. There was Ellacuría, his clear voice silenced, lying face up, as if he had looked at his killers at the moment of death. Segundo Montes, who, to me, always had seemed to live with controlled rage that the long-rooted communities of El Salvador had been violently destroyed, families torn apart, survivors flung out to live among strangers, far away. Ignacio Martín-Baró, Nacho, who worked closely with the poor most affected by the violence; I always remembered, and remembered again now, that it was Nacho who had first explained to me that in wartime, trauma and distress are not abnormal psychological states but a realistic response among ordinary people to an inescapable state of being. That in wartime, people may seem mentally sick, but what is happening is they find themselves amid problems they can't resolve and act in a way others see as inappropriate. It was a tremendous lesson I carried about the hidden cost of war. I did not know the fourth man except to nod Buenos días in passing; later I found out it was the theologian Amando López, who once had been the head of the Central American University in Managua.

I wrote down details of visible wounds, clothing, position of the bodies.

There was a banging on the metal door. Looking over, I saw a Salvadoran officer leading several soldiers into the garden, arms at the ready. Usually in a situation such as this, a reporter will keep one eye on what is happening while keeping the other on an exit route, should it be needed, and I may have done that, but I can't remember. The picture that stays with me is a tableau of clerics and reporters, unmoving as Tojeira walked right up to the officer and said, "Do you see what has happened here? Do you see what you have done?"

I have not been able to learn whether this military unit heard of the event and appeared on its own or whether it was part of the assassination operation, its mission to record the scene, part of the official attempt to attribute the murders to rebels. What is certain is that courage prevailed among the witnesses in the yard in the face of the armed men. The officer ordered a subordinate to take pictures, and they left.

We reporters hurried out to file our stories, but a well-dressed woman approached us before we could get inside the jeep. "Tell the truth," she said.

The admonition was chilling, a code for a threat by the far right against journalists, considered the enemy by the ruling ARENA party and the army. Party founder Maj. Roberto D'Aubuisson, architect of the death squad murder of Archbishop Oscar Romero in 1980, used to point to reporters covering his rallies and start the chant, "Tell the truth!"

In this case, however, it became clear the woman meant something else. "Tell the truth about what the armed forces are doing here," she said, and burst into tears.

A few days later, I returned to the university's residence area and encountered the gardener, Obdulio Lozano, husband of the murdered Elba Ramos and father of the slain girl, Celina. He was working in the dirt with a trowel. He said he was planting eight rose bushes, one for his wife, one for his daughter, and one each for the padres who died.

I passed the chapel Ellacuría once had showed me with pride when its construction was still underway, dedicated to Romero, now the resting place of Ellacuría and the other priests. Tojeira gave a press conference that day, to journalists seated before a long table. "We don't want vengeance," he said. "We want justice."

I have visited the area where the murders took place several times since 1989, once in 2011 with other reporters who also covered the civil war. Tojeira joined us in the room where the women had been killed. It was clean and furnished with a sofa, a place where visitors might sit while a student volunteer told the story of the murders.

A colleague who knew I had been present in the aftermath of the killings kept saying, "Remind Chema, tell him you were there that day," but I couldn't speak. My mouth was dry.

She reminded Chema instead, and he looked at me expectantly, but the only thing I could say was, "Why did you clean this up? Why didn't you leave things as they were?"

Tojeira suggested that the murdered women would not appreciate others seeing the place they lived disordered. "You don't think they would have liked that, do you?" he said.

What I think doesn't matter, but I believe it would not hurt for visitors to see the room the way the soldiers left it, the way I had seen it that day.

A version of this story appeared in the Nov 21-Dec 5, 2014 print issue under the headline: Remembering a day of martyrs.