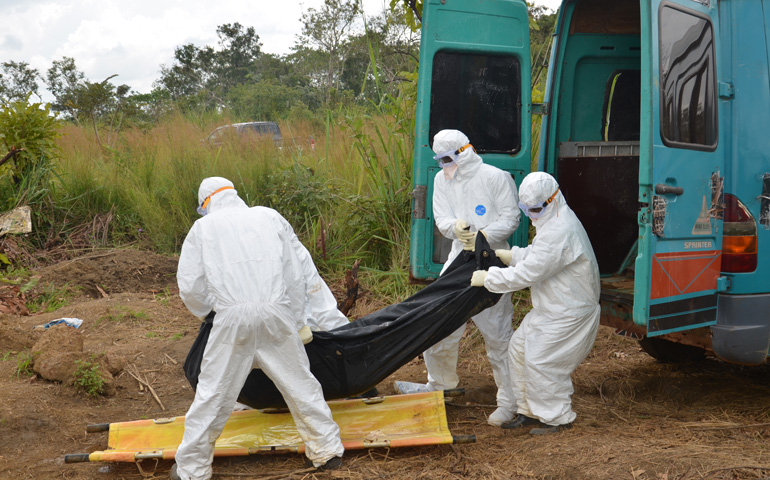 Health workers in protective gear take a body bag containing the highly contagious body of an Ebola victim out of a vehicle in preparation for burial at a cemetery in the Port Loko district in northern Sierra Leone. (CNS/ Courtesy Catholic Relief Services/Michael Stulman)

Burials that are dignified and safe are urgently needed for Ebola victims in West Africa, where corpses are frequently left unattended for days and then thrown into graves without ceremony, a U.S. church aid official said.

"So many people are dying that there has not been the capacity to respond" to burial needs in an appropriate way and "we are now making this a priority," Michael Stulman, regional information officer for the U.S. bishops' Catholic Relief Services, said in a telephone interview from Freetown, Sierra Leone.

Nearly 5,000 people have died in Sierra Leone, Guinea and Liberia during the worst Ebola outbreak on record with many people contracting the disease from touching the highly infectious dead bodies of victims.

"The ritual of the family washing the body of the deceased has been taken away and this can't be changed because of the health risks, but we can bring dignity back to the burial process," Stulman said.

CRS has taken responsibility for managing "safe and dignified burials" in Port Loko district in northern Sierra Leone, he said.

The agency will ensure that graves are marked so that families know where their loved ones are buried and that there is "one body in one grave," he said, noting that in the current crisis "this is not always the case."

Stulman, who is based in Dakar, Senegal, visited a cemetery in Freetown, Sierra Leone's capital, where laborers "are digging 40 graves a day," he said.

"We need to create ways for people to visit the graves of their loved ones and still be safe," he explained, noting that currently no funeral services are held in Sierra Leone and visits to cemeteries are not allowed.

Ebola is spread through contact with bodily fluids of an infected person and is not an airborne disease.

"We will work closely with local religious leaders in putting in place burial procedures," Stulman said.

"There needs to be some ceremony for the loved one who has died," he added.

Fr. Paul Morana Sandi, general secretary of the Inter-territorial Catholic Bishops' Conference of The Gambia and Sierra Leone, told Catholic News Agency for Africa that a meeting with Sierra Leone President Ernest Bai Koroma had led to a decision that religious leaders can be at burial sites "to pray, but from a distance, with some of the relatives present."

The removal of all rituals associated with death "has had negative influences on our own cultural practices and way of behaving," Sandi said.

"A sacred ritual has been taken away" in the wake of Ebola, Stulman said, noting that health teams in protective gear now remove corpses from homes; in the past, religious leaders and family members had carefully prepared the body for burial.

While most people "understand the severity of the disease, there is a reluctance to change behavior, particularly regarding burials," he said.

When someone dies of Ebola in Sierra Leone, households "wait between one and seven days for a burial team to collect the body," he said, noting that this is often caused by "difficult roads or a car breaking down."

CRS aims to enable burial teams to respond to calls "quickly and safely, with the resources to protect themselves from danger of infection," Stulman said.

Two vehicles are needed for collecting bodies from homes or clinics for burial; "one for the team and the other to transport the body," he said.

"The team should spray the body with disinfectant and put it in a bag and also spray the house," he said.

Noting that deaths from Ebola can be "sudden and unexpected" and there is little help at hand for grieving families, Stulman said CRS will start providing counseling services.