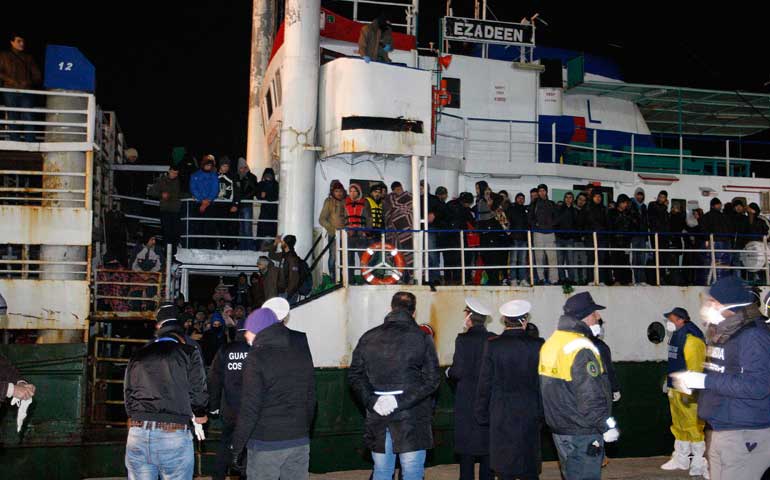 Migrants stand on the deck of the Ezadeen as they arrive at Corigliano Calabro harbor in Southern Italy early Jan. 3. (Newscom/Reuters/Antonino Condorelli)

Migrant crossing of the Mediterranean Sea took a drastic form during the New Year's holiday when two freighters, laden with Syrian refugees and apparently abandoned by their crews, headed straight for the Italian coast.

Flavio di Giacomo, spokesman for the International Office of Migration in Italy, said Italian authorities are investigating reports that smugglers abandoned the Blue Sky M and the Ezadeen, a former cattle hauler, after locking the ships on autopilot pointed toward Italy. European coastal patrols rescued the two vessels, which were carrying more than a thousand refugees -- children and pregnant women among them.

The "ghost ships" are part of a new and treacherous method of passage for Syrians fleeing a war, now in its fourth year. Desperate to enter Europe, they are paying smugglers thousands of dollars for the sea crossing.

Syrian war refugees form the largest contingent. Until recently, their most common path of travel entailed boarding planes to Tunisia then traveling by land to Libya or Egypt where smugglers operated boats going north.

But political instability in Libya and the Egyptian military's increasingly restrictive control of Egypt's border have made these routes too risky. Refugee advocates say overland routes into Europe via the Balkans have also become more difficult, especially since Bulgaria's recent fencing of its borders.

Amid these obstructions, Syrians are choosing new routes of exodus.

Di Giacomo reports that since last fall, large ships, carrying hundreds of Syrians, have been coming into Italy from Turkish ports, which are relatively easy to reach from Syria. Syrian refugee Ali Saed, who purchased tickets in the port town of Mersin for his family's passage to Italy on a smuggler's boat last December, described a highly organized operation. "There is a little office near the port where a broker takes your money and gives you a password," Saed told The Daily Beast. "You can wire them the money or give them cash. They sell other kinds of tickets, too, for tourism excursions."

Passengers on the two freighters that arrived in Italy earlier this year reported paying smugglers between $4,000 and $8,000 for their sea crossing from Turkey, which can take a week or longer depending on weather.

The high fee offers few amenities, and life jackets are not provided. A cellphone photo taken by a Syrian migrant who traveled on the Blue Sky M shows hundreds of men sleeping on the floor of a cavernous room that looks like a cargo storage area.

"Migrants [on the Ezadeen] told us that during the trip they were strictly controlled by the smugglers, who forced them to remain seated, and that the weather conditions were extremely bad," di Giacomo said.

Apparently in order to avoid the authorities, the freighters from Turkey wait in the open sea while smugglers ferry out the refugees in small crafts. Migrants can wait on the ship for hours, sometimes days, until there are enough passengers to make the journey profitable.

Despite the risks and difficulties, boat passage to Italy from Turkey is only an option for middle-class Syrians able to pay the smugglers' high fees. The vast majority of the more than 3 million people who have fled Syria remain in the bordering countries of Lebanon, Jordan and Turkey, where conditions for the new arrivals are deteriorating.

Di Giacomo told of a Syrian family of 15 who fled to the Syrian border city of Kobani, then to a refugee camp in Turkey. Conditions there were so difficult, he said, they opted to sell their possessions to purchase tickets on a smuggler's boat to Italy.

Such desperation has proved lucrative for some. Italian police estimate smugglers made $3 million in profit off the 359 passengers traveling on the Ezadeen.

Refugee advocates say they are extremely worried about the emergence of this new illicit enterprise capitalizing on a conflict that seems to have no end in sight. The U.N. High Commissioner for Refugees anticipates the Syrian refugee count will climb to 4 million by year's end.

"The predictability of thousands now fleeing Syria every month allows smugglers to plan for a reliable stream of customers, which of course allows them to set a price," said Joel Millman, a spokesman for the International Office of Migration in Geneva. Millman said Lebanon's recent decision to require visas for Syrians entering the country may divert migrant traffic to Turkey and also swell demand for smugglers' services.

The increase in Syrians crossing the Mediterranean comes amid a cutback in European patrol of those waters. Unlike its Italian predecessor, the European Union-funded coastal patrol program Triton does not include search and rescue in its mandate and is only responsible for patrolling the shoreline 30 miles out, di Giacomo said.

"That geographical limitation worries us," he said. "If the flows do not decrease, which is not happening, we are worried that we could see more shipwrecks. More must be done. The top priority is to save lives."

A version of this story appeared in the Jan 30-Feb 12, 2015 print issue under the headline: Desperate Syrian refugees enter Europe via 'ghost ships'.