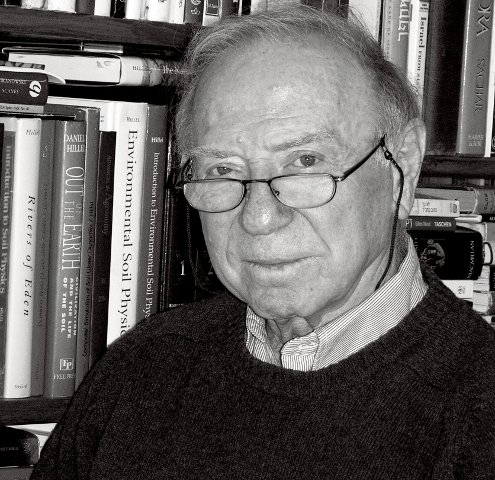 An Israeli soil scientist who developed drip irrigation techniques for use in desert agriculture has been named the 2012 recipient of the World Food Prize, honoring "individuals who have advanced human development by improving the quality, quantity or availability of food in the world."

Dr. Daniel Hillel, 82, a research scientist at Columbia University's Earth Institute, will receive the $250,000 award Thursday at the state capitol in Des Moines. His work with the NASA Goddard Institute for Space Studies on the adaptation of agriculture to climate change has been promoted globally through the World Bank, U.N. Food and Agriculture Organization, and USAID.

Living in an arid climate gave Hillel firsthand knowledge of how important water preservation would be to the future. Growing up in Palestine, Hillel, who was born in Los Angeles, gained a lifelong appreciation of the land and the need to protect its vital resources, according to his biography.

After earning a doctorate in soil physics and ecology at Hebrew University of Jerusalem and post-doctoral work at the University of California, Hillel returned to Israel, where he lived in a small kibbutz in the highlands surrounding the Negev Desert. It was there Hillel developed a way of using a low-volume, high-frequency, calibrated water supply for plantings. The years that followed would provide ample opportunities for him to bring water irrigation to the Israeli desert and to his Arab neighbors as well as he traveled throughout the region, encouraging the use of his drip irrigation methods.

"His research led to a dramatic shift away from the traditional method of irrigation," Ambassador Kenneth M. Quinn, president of the World Food Prize Foundation, said at a ceremony in June, when Hillel was announced as the 2012 laureate. Quinn continued:

Traditional methods utilized periodic episodes of flooding to saturate the soil, followed by longer periods of drying out the land. Instead, our laureate's new innovative method applies water in small but continuous amounts directly to plant roots with dramatic results in both increased productivity and enhanced water conservation.

Since this initial achievement in Israel, this new system of irrigation has been spread around the world, impacting thousands and thousands of farmers and producers in more than 30 countries.

In conjunction with the World Bank and other international development organizations, our laureate has worked in several Middle Eastern countries, as well as in Turkey, Pakistan, Sudan and within Palestinian communities, to spread this new technology to all who could benefit from it. As he did so, he built friendships which promoted both agricultural development and greater intercultural understanding. Indeed, while our foundation never reveals the names of persons who submit nominations for our prize, it is significant that several of the letters supporting his nomination came from individuals and institutions in Egypt, Jordan and the United Arab Emirates.

"He is probably the most well-known soil scientist in the world," Cynthia Rosenzweig, a former graduate student of Hillel's and head of the Climate Impacts Group at the NASA Goddard Institute for Space Studies, told The Jewish Week in September 2010. "He really is the father of sustainable water management."

Hillel began his World Food Prize week with a stop Monday in Ames, Iowa, to speak to 300 students, faculty members and dignitaries as part of the Laureate Lecture Series at Iowa State University.

"We need to broaden and deepen our view of the planet," he told the crowd with a quiet but firm conviction. "We are not able to expand our agricultural growth without encroaching on other systems and a fragile biosphere. ... Before the Industrial Revolution, subsistence farmers grew only for their own needs. Now in the industrial countries, less than 3 percent are farmers, and those farmers now rely on industry for fuel, pesticides to control pests and chemicals to increase soil fertility. This ends up polluting the water, decimating wildlife, and threatens humanity."

In 1970, Iowan Dr. Norman Borlaug was awarded the Nobel Peace Prize for his work throughout the regions of India and Pakistan in which his crop-growing techniques had saved the increasing populations of those countries from starvation. According to the World Food Prize Foundation, shortly after winning his prize, Borlaug consulted with the Nobel committee, hoping to include a category among the prizes for those in agriculture who work to combat world hunger. His request was turned down.

With the help of sponsor Carleton Smith and the General Foods Corporation, Borlaug created the World Food Prize in 1986, and its first recipient, Dr. Monkombu Sambasivan Swaminathan of India, received the $250,000 prize the following year.

This year, as the World Food Prize celebrates its 25th anniversary, Swaminathan, who worked with Borlaug, was invited to submit a commentary on the future.

"During the next 25 years, the most important breakthrough we need is environmentally friendly and climate-resilient farming techniques, which can increase productivity without adverse ecological side effects," said Swaminathan, who now leads his own foundation.

A protest against corporate agriculture's involvement with the world food system is planned for the night of the World Food Prize award.

[Sue Stanton is an author and freelance journalist from Ames, Iowa.]