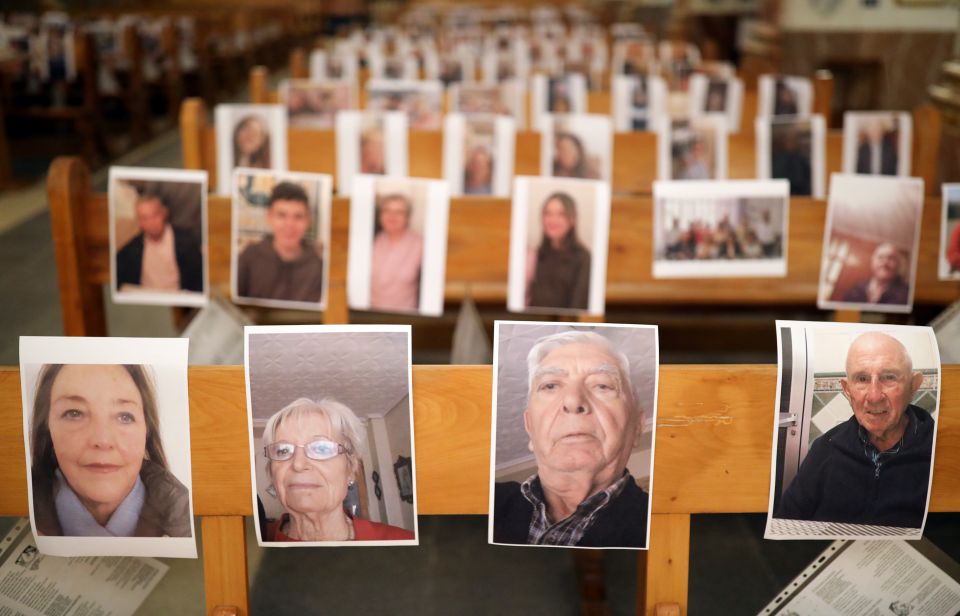 Pictures of parishioners are seen on empty pews at a church near Valencia, Spain, April 9, 2020, during the COVID-19 pandemic. (CNS/ Reuters/Nacho Doce)

Warsaw, Poland — Although Catholics in most East European countries have backed measures to control the COVID-19 pandemic, for some it has also revived painful memories of communist rule.

Sensitivities over church closures have also surfaced in Western Europe, where some Catholics have questioned the right of civil authorities to prohibit religious worship.

"The terrifying vision of empty churches shows how it might have been if past anti-Catholic hostilities had prevailed," said Polish Radio presenter Malgorzata Glabisz-Pniewska.

"There hasn't been any great resistance, since these measures have been ordered by a government seen as sympathetic to the faith, with acceptance by church leaders. But we've never been barred from churches before, even in periods of persecution, and it's doubtful the curbs would have been accepted so easily if a more anti-clerical government had been in power."

Glabisz-Pniewska spoke as Easter season Masses and liturgies were livestreamed, and the Polish bishops' conference president, Archbishop Stanislaw Gadecki, urged Catholics in an April 12 TV message to see the pandemic as a chance for "social changes that really serve the human person."

Glabisz-Pniewska told Catholic News Service April 13 that many Polish Catholics had been "surprised and shocked" by current restrictions, but had readily participated in "virtual services" via the internet.

However, Polish media said police had dispersed parishioners from several churches and fined priests for not enforcing rules limiting Mass attendance to five, fueling sensitivities in the traditionally Catholic country.

Meanwhile, Romanian Catholic Bishop Virgil Bercea, whose church was persecuted under communist rule, said church closures had also been questioned there, but he predicted most critics would "react differently" if their families were touched by the coronavirus.

"Our church was forbidden and forced to live clandestinely under communism — we had no priests and had to worship in our homes," he told CNS April 11.

"Everything is now closed again — churches, schools and universities — and all that remains once more is prayer at home. It's a distressing and difficult situation, with many saying the situation under communism has returned. But we understand their sufferings and can hope it finish soon this time." 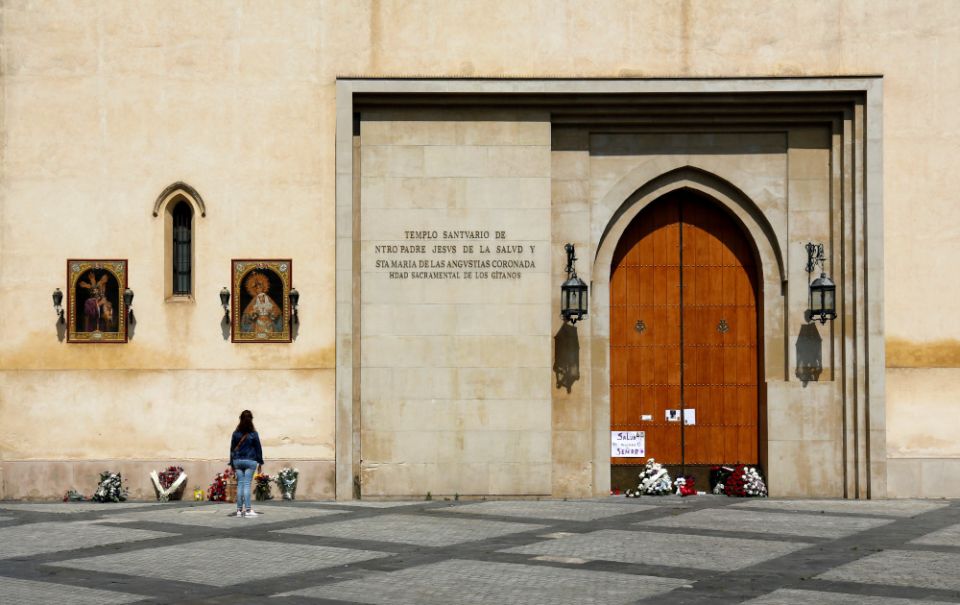 A woman prays outside a closed church in Seville, Spain, April 10, 2020, during the COVID-19 pandemic. (CNS/Reuters/Marcelo del Pozo)

"The situation recalls the closure of churches for more than 40 years under communism, when we had no possibility to worship, still less celebrate Easter," Bercea told CNS.

"We've experienced this before, when having nothing was normal. At that time, it was communism, and now it's the coronavirus. The situation is different, but the realities are much the same."

In Slovakia, Prime Minister Igor Matovic thanked church leaders for complying with an order to close places of worship.

However, in neighboring Ukraine, where church services with up to 10 worshippers are still allowed under a March 11 decree, the All-Ukrainian Council of Churches and Religious Organizations, which includes Catholic leaders, warned April 9 that police and local authorities were violating religious freedom by "interpreting quarantine restrictions differently," in some cases closing churches completely.

In a televised statement April 8, President Volodymyr Zelensky said his government was "in constant dialogue" with church leaders, adding that "God's commandment of love of neighbor" was best understood as "not creating a danger to their health and life."

Ukraine's National Police confirmed to the Interfax agency April 10 that police had "no right to close churches" and would no longer "remove people from them."

In Germany, the Federal Constitutional Court rejected two Catholic legal petitions April 10 against a government ban on religious services, ruling protection against "threats to life and limb" should take priority during the pandemic.

However, the court said both applicants had shown common worship and reception of the Eucharist were central to the Catholic faith and "could not be replaced by internet transmissions or individual prayer." It added that the ban on public worship was an "extremely serious interference with freedom of belief," and should remain under "constant and strict review."

In an interview with the online Religion Digital news agency, Arguello said church leaders had advised Catholics to stay home, since a March 27 government decree on COVID-19 did not explicitly recognize church attendance as a reason to leave home.

Spain's Association of Christian Lawyers and other groups denounced the raid as an attack on religious freedom and demanded the resignation of the nation's interior minister.

Preaching at the April 11 Easter Vigil in Valencia, Cardinal Antonio Canizares Llovera also accused the government of attempting "to take away the freedom to proclaim and celebrate the Gospel and Resurrection."

The secretary-general of the Russian bishops' conference, Msgr. Igor Kovalevsky, told CNS April 13 that strict isolation rules had been enforced in St. Petersburg and Moscow. He said most Catholics were aware parallel regulations were being enforced in Western countries, but added the restrictions had still aroused "fears and negative associations."

"There's still no standardized federal regulation on quarantining in Russia, but Easter has had to be celebrated without people," Kovalevsky said.

"The faithful have generally taken this calmly, although with much sadness. But some people, here and in other post-communist countries, are dissatisfied and have disputed whether churches should be closed."