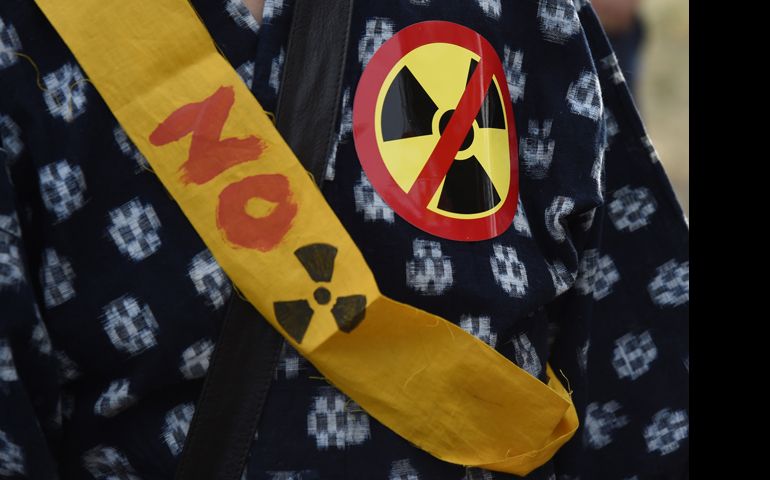 A protestor wears an anti-nuclear symbol and a slogan during an Aug. 6 rally outside the Lawrence Livermore National Laboratory in Livermore, Calif. (CNS/John Mabanglo, EPA)
This article appears in the Francis in the United States feature series. View the full series.

Many people have many concerns they want Pope Francis to address while in the United States -- global inequality, environmental degradation, hunger, refugees, materialism, abortion, human trafficking, family life, racism, war -- far too many for any one person, however courageous, however broad his 78-year-old shoulders. The hope, of course, is that something he says might ameliorate, even slightly, some pressing issue facing the human family. Expectations will only grow to unreal -- even unfair -- levels.

Dare we add one more moral concern to the list? Nuclear weapons and the consequences of a nuclear war -- even a small one. These are grave threats to humanity and ones our nation plays a huge role in perpetuating. Sadly, the humanitarian threats posed by nuclear weapons -- and we are going forward fast to build more -- get almost no U.S. media coverage. Out of sight, out of mind. This is how our policymakers like it.

Francis can change this.

He spoke eloquently on the subject of nuclear weapons in a letter read on his behalf at the Vienna Conference on the Humanitarian Impact of Nuclear Weapons last December. He called for ridding the planet of these weapons, speaking about their enormous financial and humanitarian costs.

Said Francis: "Military codes and international law, among others, have long banned peoples from inflicting unnecessary suffering. If such suffering is banned in the waging of conventional war, then it should all the more be banned in nuclear conflict."

To our grave peril, it is virtually impossible to imagine the enormous consequences of a nuclear exchange. We have Hiroshima and Nagasaki as examples. They were horrific -- and misleading. Compare the telephones of 1945 to the cell phones of today. Technology advances and, in this, nuclear bombs are no different than cell phones. The destructive force of one warhead deployed today on a Trident submarine is some 30 times greater than the destructive force of either of the bombs dropped over Japan 70 years ago.

The Vienna conference highlighted recent studies on nuclear weapons impacts deserving of our attention. The Vatican had representatives at the conference, but few Americans know much about it or the studies. There's been almost a universal U.S. media blackout. We hope Francis will poke our consciences, and, in doing so, help take us off the perilous nuclear weapons path, one costing U.S. taxpayers nearly $1 trillion over the next quarter century.

One study, published under the title "Nuclear Famine," details the work of atmospheric scientists Alan Robock of Rutgers University, Brian Toon of University of Colorado Boulder, and Richard Turco of UCLA. They found that even if there were a limited nuclear war with small bombs, such as if India and Pakistan each exchanged fifty 15-kiloton bombs -- a tiny fraction of the size of the warheads in the U.S. and Russian arsenals -- the effect would create immense firestorms that would quickly envelope the planet with layers of dense stratospheric smoke.

That black smoke would circle the Earth and remain in the stratosphere for a decade or more. It would block and prevent a large fraction of sunlight from reaching the Earth's surface. The sharp reduction of warming sunlight would shorten growing seasons and, in turn, reduce food crops, causing the starvation of up to 2 billion people, mainly those living in the poorest countries.

"The report underscores the urgent need to move with all possible speed to the negotiation of a global agreement to outlaw and eliminate nuclear weapons," said Ira Helfand, co-president of International Physicians for the Prevention of Nuclear War. That organization was awarded a Nobel Peace Prize in 1985 for its efforts to educate doctors, politicians and the general public about the consequences of a nuclear war.

Helfand, who attended the Vienna conference, said he is hopeful Francis will speak frankly about the nuclear weapons threat, "the most immediate threat to the survival of the human family."

Yes, there will be much on Francis' plate. We are praying for a successful visit. We are also praying he will speak effectively, poke consciences and touch human hearts.

The foolishness -- indeed, the madness -- of building more and more weapons, ones that would end civilization, if not all human life, if even only a few are used, must end.

Francis could help make this happen. When he speaks about the need to end war forever and build a peaceful planet, our hope is he gets specific. We hope he adds to his list the issue of nuclear weapons. We hope he looks policymakers in the eye and, speaking for all of us, tells it like it is.