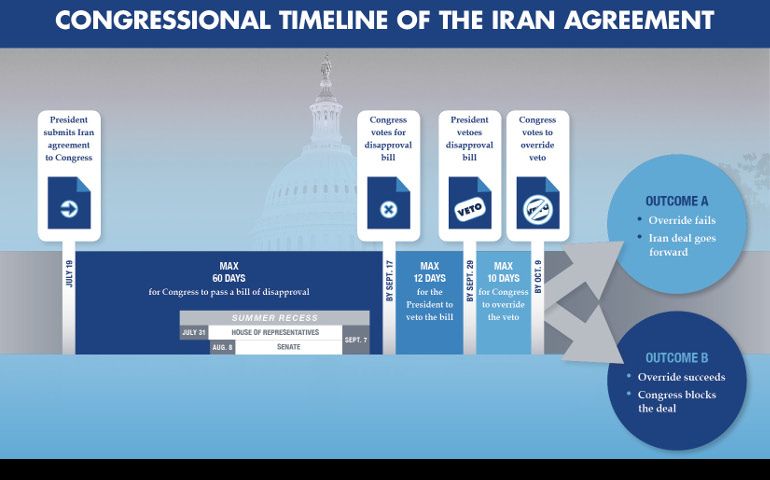 In late July, Iran and an international coalition known as the P5+1 -- comprising the United States, China, France, Germany, Russia and United Kingdom -- concluded nearly two years of intensive negotiations with a historic agreement to prevent a nuclear-armed Iran. As the accompanying graphic shows, Congress is in a 60-day assessment period leading to the vote to ratify the agreement Sept. 17.

"After years spent teetering on the brink of war with Iran, the Joint Comprehensive Plan of Action offers an unprecedented opportunity for lasting peace," says the Friends Committee on National Legislation. "This deal seals off Tehran's potential pathways to a nuclear weapon and subjects Iran to a robust transparency and inspection regime. The world is safer with the Iran deal than without it."

The Quaker lobby group is one of many faith-based groups that have endorsed the Iran deal and are working to secure congressional approval.

In a letter urging all members of Congress to support the deal, Las Cruces, N.M., Bishop Oscar Cantú, chairman of the U.S. bishops' Committee on International Justice and Peace, called it a "momentous agreement" and -- quoting Pope Francis -- said "the negotiated framework is 'a definitive step toward a more secure and fraternal world,' a goal we all share."

According to organizations like the Friends committee, the Arms Control Association, Council for a Livable World, and the Center for Arms Control and Non-Proliferation, support for the deal extends to the entire U.N. Security Council, a very long list of former U.S. and international security leaders and advisers, active and former diplomats, and the majority of Americans. Support in Congress, however, is wavering.

To secure congressional approval, in early August, President Barack Obama began a series of high-profile speeches and appearances to rally public support for the agreement.

On a July 30 conference call with a large number of progressive groups, Obama said Democratic members of Congress were "gettin' squishy" on the issue and asked for help to stiffen their spines. "They start getting squishy because they're feeling political heat. And you guys have to counteract that," Obama said, according to The Associated Press.

Those interested in building peace by stopping the proliferation of nuclear weapons should contact their representatives and senators and tell them to approve the deal with Iran. The Friends committee suggests making these points:

The world truly is safer with the Iran deal than without it. Applying pressure to our elected representatives will keep us on this path to peace.