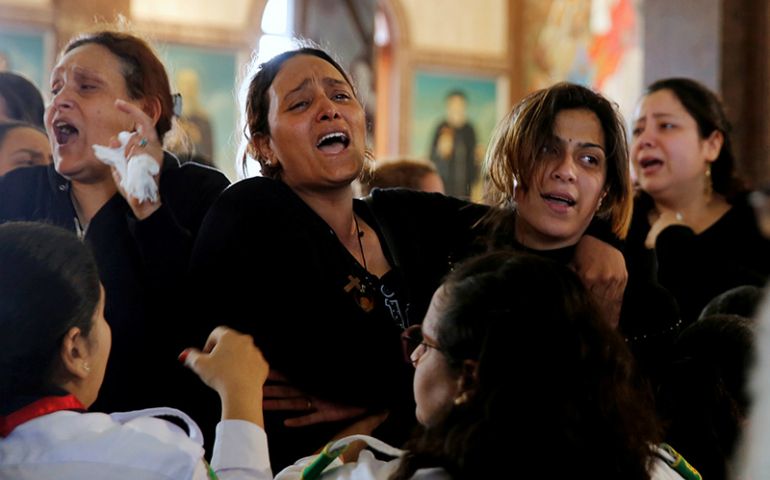 Relatives react as they mourn for the victims of the Palm Sunday bombings during their funeral at the Monastery of St. Mina (Deir Mar Mina) in Alexandria, Egypt, on April 10, 2017. (Reuters/Amr Abdallah Dalsh)

Cairo — In the Upper Egyptian city of Minya, Coptic women hurry to finish their shopping for the Easter feast, as they always do.

"My mother comes over, we watch the prayer at St. Mark's Cathedral in Cairo on TV and when the Lent fast ends at midnight, we eat a special lamb and orzo soup," said 53-year-old homemaker Fadia Ibrahim.

Still, after two suicide bombings that killed 45 people at Coptic churches in Tanta and Alexandria on Palm Sunday, not everything is the same this year.

Now, she said, the women in Upper Egypt have decided to forgo festive clothes to mark the holidays and will instead don mourning black.

"Before the Palm Sunday bombs I was worried about Paul's ability to make a good living," said Ibrahim. "Now I worry about his safety."

The two bombings, for which the Islamic State group claimed responsibility, were the biggest coordinated attacks against Egypt's Christians in decades. They have caused a surge of anxiety and anger through the 10 million-strong Coptic community in Egypt just as it prepares to mark Easter.

While the Egyptian security services say investigations into the attacks are ongoing, provincial officials in Tanta say cameras installed at St. George's Church show that a suicide bomber had easy access to the church because the metal detector at the gate was out of service.

That's just one more strike against those who have promised to keep Copts safe, say community members.

"It is clear that there is a huge failure to limit terrorism in Egypt," said Hany Riad, a 43-year-old Coptic social worker in Cairo. "The variety of targets range from the ambushes on army and police conscripts to important figures in the military and the Interior Ministry.  Now, (the) Islamic State is hitting churches and the Christian community."

As a result, Riad said he's heard from some that people are now afraid to attend Good Friday and Easter services. Coptic dioceses in Egypt announced midweek that Easter celebrations would be limited to the liturgical prayers "without any festive manifestations."

Riad, like some in Egypt, said President Abdel-Fattah el-Sissi's counterterrorism measures have not only failed to keep people safe but caused a militarization of Egypt's society and economy that he thinks has retarded wider economic growth and paved the way for the spread of fundamentalist Islamism.

"Instead of religious enlightenment we have discouraged youth in Egypt, (and they are now) willing to blow themselves up as a reaction to their marginalization," he said.

Another issue within the Coptic community is the "renewal of religious discourse," an official term used for Sissi's push to get state-supported clerics to reinterpret Islamic doctrines of "jihad" or holy war and inculcate a commitment to coexistence between Muslims and Christians.

Some Copts scoff at the attempt because it has failed to stop attacks against their community.

Fady Victor, the 38-year-old owner of an advertising agency, was seated in the seventh pew back from the altar of the church in Tanta when the explosion ripped through the sanctuary.

"My face and my body were hit by debris and parts of the exploded victims," said Victor. "So personally, I would prefer silence over the renewal of religious discourse."

Still, some community leaders say the community will stay strong in the face of these attacks.

"These acts will not harm the unity and cohesion of the people," said Coptic Pope Tawadros II, who had left the Palm Sunday Mass at St. Mark's before the suicide bomber in Alexandria detonated an explosive belt, killing at least 13 people and injuring 21 others – including Muslim security guards and police.

In a first for an Egyptian president, Sissi visited Coptic cathedrals for Masses officiated by Tawadros, seen as one of the key pillars of support for the current administration. Sissi visited St. Mark's Cathedral again Thursday, showing solidarity with the Copts and extending Easter greetings to Pope Tawadros and the entire Christian community.

Still, the wave of violence has opened up new arguments about Egyptian politics, Coptic religious doctrine and cracks in community unity.

"Normally Easter brings families and generations together," said Wael Gally, a 40-year-old lawyer from Mansoura, a city northeast of Tanta. "Families exchange visits and the eyes of the little kids light up when they receive gifts of new clothes."

Gally worries that some Copts are influenced by ideas about Christian martyrdom.

He cited a popular Coptic TV preacher, the Rev. Boules George, who thanked the church bombers for "allowing Christians to leave this Earth."

"Now for the first time you see real splits in the community, with some blaming the alliance with Sissi for our predicament and danger and others defending the crackdown on all dissent, and accepting the current situation as a part of Christian faithfulness," said Gally. "I expect a lot of family fighting at this year's Easter feasts."

Listening to God's word between Christmas and Lent