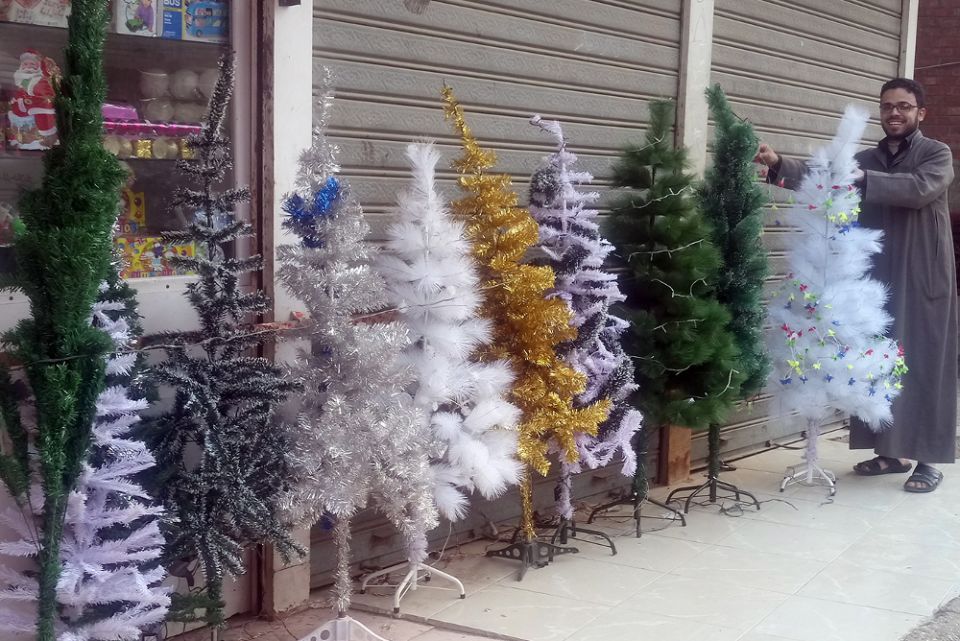 Around this time of year, many of the village's 40,000 residents recall their frequent pilgrimages to the Holy Land, which include a stop at Bethlehem's Grotto of the Nativity.

"We make our own papier-mâché scenes of the Grotto of Christmas as a symbol of the holy infant who was born poor in a cave," said Ne'mat al-Qumos, 52, a vice principal at El Kosheh's public high school.

Like many other Orthodox Christian communities in the Middle East, Egypt's 20 million Copts portray the birth of Jesus as happening in a cave, not the wooden stable in the manger scenes prevalent in Europe and the United States.

Because they follow the Julian calendar, they celebrate Christmas Eve on Jan. 6, and feasts are held on Christmas Day, Jan. 7.

Some now argue this ancient community should change the dates to Dec. 24-25 as a sign of global Christian unity. The idea is drawing mixed reaction in a community that is already experiencing change in its longstanding Christmas traditions.

Evergreen fir trees don't grow in the Nile Valley, so the Christmas tree is a relative newcomer to a landscape of sugar cane, wheat and cotton fields and date palms. Today a 9-foot-tall Christmas tree, along with El Kosheh's biggest nativity grotto, decorates the courtyard of the Church of the Martyrs and the Archangel Michael, the largest of 10 congregations in the town.

"The Christmas tree did not arrive here until after the big massacre," said al-Qumos, referring to a January 2000 clash with Muslims from a neighboring village that erupted in El Kosheh after a dispute between a Muslim trader and a Christian shop owner.  Twenty-one local residents were killed. Some were crucified.

Today the violence persists despite President Abdel-Fattah el-Sissi's support for the community, including giving Coptic civil servants the same paid leave to make pilgrimages to Jerusalem as their Muslim peers receive to make the hajj to Mecca. El-Sissi has also attended Christmas celebrations in Cairo.

"We needed joy after the bitter grief we lived, and the beautiful lights and adornments of Christmas trees helped us," al-Qumos said. 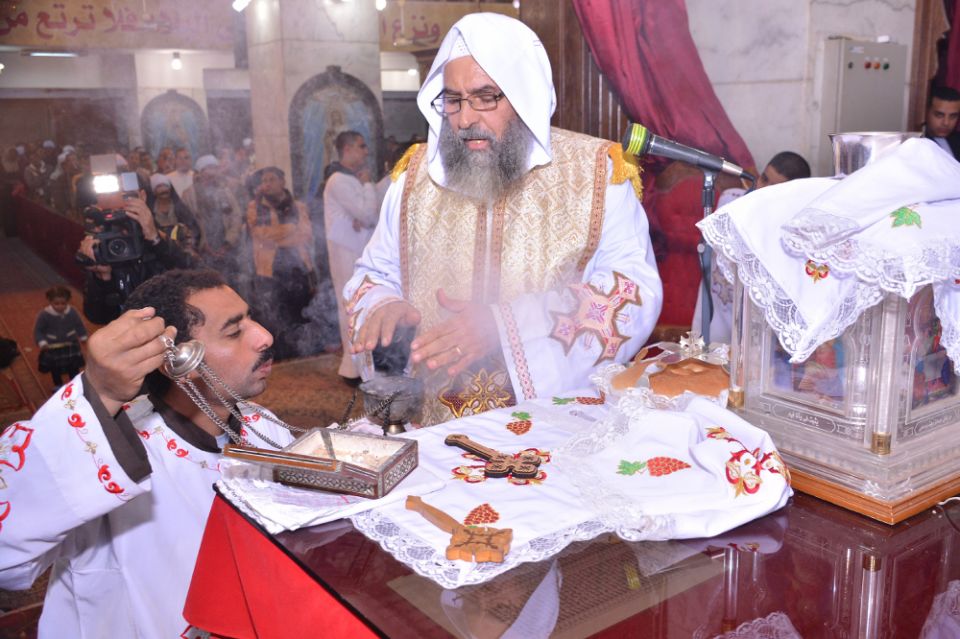 A Christmas service is celebrated at a church in El Kosheh, Egypt, on Jan. 6, 2016. (RNS/Fady Hadny)

Still, as plastic trees imported from China have become ubiquitous in the rural Coptic heartland, shifting Christmas traditions are simultaneously embraced and questioned.

"The tree is certainly a new phenomenon, as is Santa Claus," said 62-year-old homemaker Angel Marcus. "But I still stick to my grandma's old holiday recipes of grilled Nile tilapia and mackerel, even though many of my neighbors have started making meat dishes like roast beef and turkey."

Church historians agree that the original Saint Nicholas was born in Asia Minor in 280. Legend holds that Nicholas unexpectedly spent in time in Egypt when a storm knocked his Holy Land-bound ship off course to Alexandria, the Mediterranean port city that serves as the official seat of Coptic popes.

"In eastern churches, Nicholas' miraculous rescue earned him the title of the patron saint of sailors," said Yousra El Gendi, an author of scholarly books on the community. "The red-robed Santa Claus is a new bit of iconography in Egypt, particularly for the rural Copts. These things were not seen in Egypt until the British effectively occupied the country in the late 19th century and French Jesuits and Italian Franciscans built hospitals and schools."

Bishop Anba Epiphanius, who was also the abbot of St. Macarius Monastery, was the point man in Coptic Pope Tawadros II's efforts to reconcile their church with the Vatican.

But in July Epiphanius was killed. The two men charged in his death are monks with links to a group called "The Faith Protectors" who are vehemently opposed to changing the dates of scriptural readings, Christmas and Easter.

The group has threatened to disrupt any attempts to move the date of the holiday.

"We are happy with the idea of collective celebration provided that our loved ones come to us in our time to celebrate with us as we also celebrate in the same way that our apostles gave us, " said the association's founder, Mina Assad Kamel. 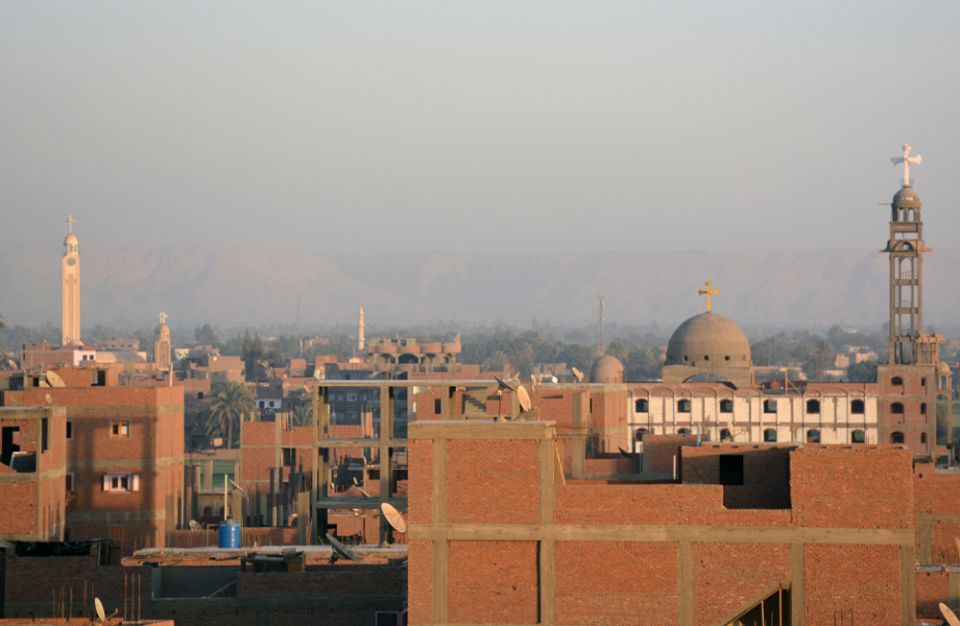 Al-Qumos, the high school administrator, characterizes the Faith Protectors as extremists. But he believes the Coptic church should keep its unique calendar.

"I see nothing wrong with Santa Claus and Christmas trees," he said. "But I think changing Christmas for some kind of political rapprochement with the West is wrong."

But 31-year-old truck driver Malam Allam, who hauls the boxes of plastic trees 40 miles from the provincial trading center of Sohag to El Kosheh, said the date change is inevitable and would be inspiring.

"Modern transport and technology is erasing the difference between the countryside and cities and even between Egypt and Europe," said Allam. "Pope Tawadros sees this as something beautiful, and I agree to unify Christmas with the Western world so we all celebrate Christmas at the same time."