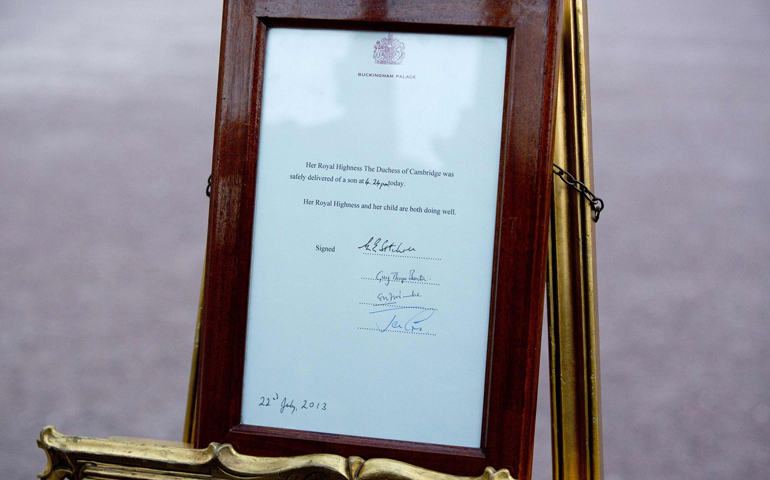 A notice formally announcing the birth of a son to Britain's Prince William and Catherine, Duchess of Cambridge, is placed in front of Buckingham Palace in London on Monday. (CNS/Reuters/Neil Hall)

The birth of the royal prince is a "source of joy" for people around the world, said the president of the English and Welsh bishops' conference.

Archbishop Vincent Nichols of Westminster issued a statement of congratulations to Prince William and his wife, Kate, the Duchess of Cambridge, on the birth of their first son, who is third in line for the British throne.

"On behalf of the Bishops' Conference of England and Wales, I would like to congratulate their Royal Highnesses, the Duke and Duchess of Cambridge, on the birth of their son, his Royal Highness, the Prince of Cambridge," the archbishop said in a statement Tuesday.

"The birth of the new prince will be a source of joy not only for the royal family but for the peoples of the United Kingdom and beyond," said Nichols, president of the Bishops' Conference of England and Wales.

The archbishop promised prayers from the Catholic church for William, Kate and their new son.

"May Our Lord Jesus Christ bless and protect them, and may the prayers of the Blessed Virgin Mary and St. Joseph intercede for them," he added.

He is the first child of the couple, who were married in Westminster Abbey in April 2011.

The prince is the grandchild of Prince Charles, heir to the reigning monarch, Queen Elizabeth II.

A statement issued by the Duke and Duchess of Cambridge at midday Tuesday said all three were doing well. They thanked the hospital staff for their "tremendous support."

Meanwhile, gun salutes sounded across London to mark the birth. Such military salutes traditionally honor the birth of every prince or princess, no matter where their place is in the line of succession, the Ministry of Defense said. The last royal salute for a birth was for Princess Eugenie in 1990.

The bells of London's Westminster Abbey tolled for three hours beginning at 2 p.m.

Anglican Archbishop Justin Welby of Canterbury said in a statement Monday that he was "delighted" by the birth.

"Along with millions here and around the world, I share in their joy at this special time," he said. "May God bless this family with love, health and happiness in their shared life ahead."