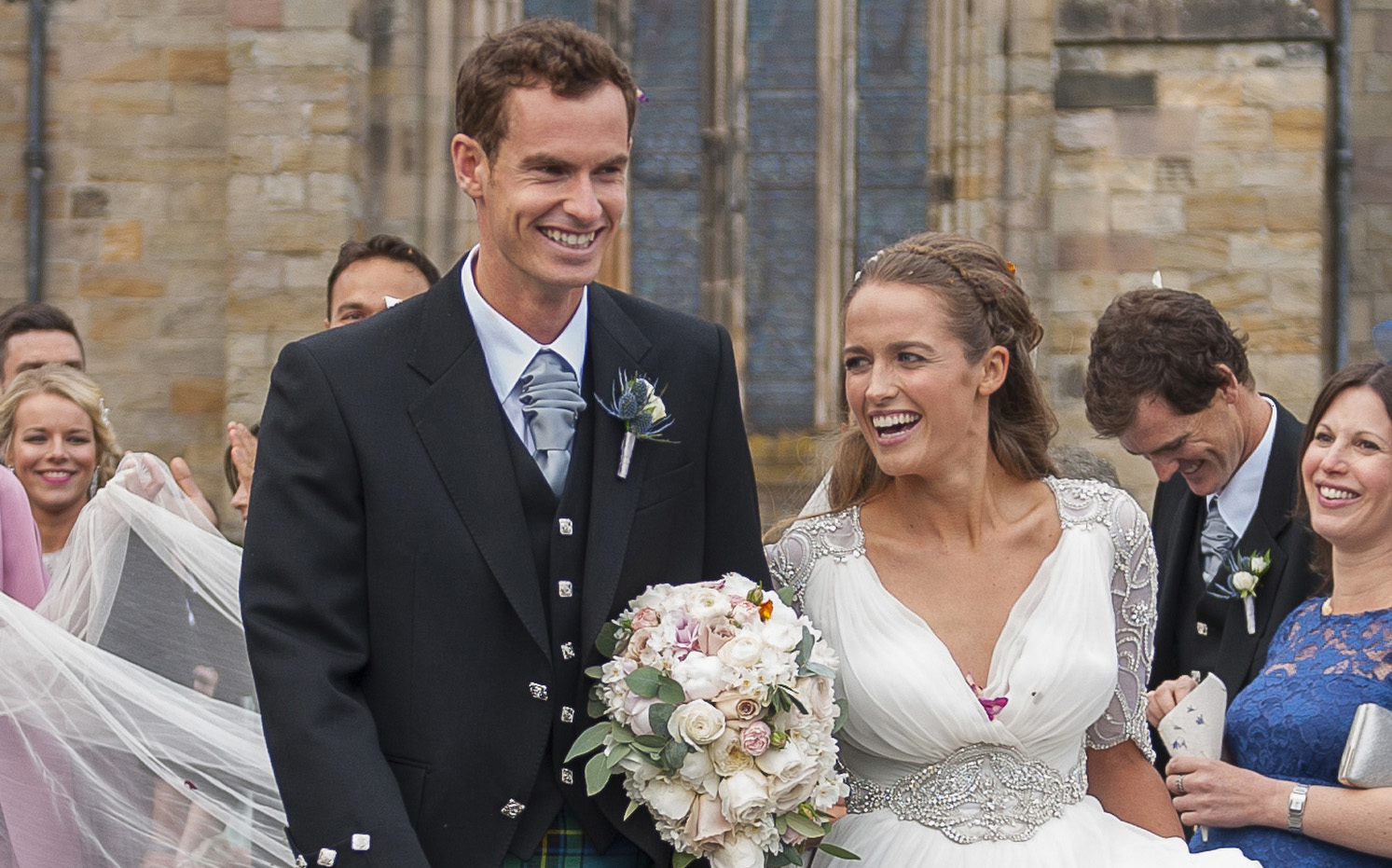 British tennis player Andy Murray and his wife, Kim, leave after their April 11 wedding ceremony at the cathedral in Dunblane, Scotland. (CNS/EPA/Joey Kelly)

As some in the United States consider whether religious and civil marriages should be separated, they might look to practices in Europe, where most countries have long distinguished between the two.

"Whereas the Catholic church has a clear vision of the special meaning of marriage, it's viewed in the civil context as a contract between two people -- and it's a fact of modern society that such contracts vary," Thierry Bonaventura, spokesman for the 34-country Council of European Bishops' Conferences, told Catholic News Service on Monday.

"In general, however, the system works well here. The church accepts civil unions, and the state is happy to see religious marriages take place if they're registered with the civil authorities."

Today, the 47 member-countries of the Council of Europe, with their combined population of 820 million, generally concur on marriage criteria concerning age, consent and kinship.

However, rules and procedures vary on associated property and inheritance rights, as well as on parenting, marital names and mutual duties, while attitudes to civil and religious marriages reflect historical experiences, cultural standards and social expectations.

"In countries with a harmonious tradition of church-state separation, the state acts in agreement with the church to regulate marriages," Msgr. Piotr Mazurkiewicz, a Polish church expert, told CNS.

"In others, however, where church-state ties are traditionally hostile, they act quite separately. But there's been a modus vivendi here too -- although marriage laws make no mention of churches, it's recognized that churches exist and conduct their own ceremonies."

In Britain, clergy of the established Church of England are legally obliged to conduct public marriages, and the civil register is traditionally signed in church as part of the wedding ceremony.

Similar procedures apply in other countries with official state churches, such as predominantly Lutheran Finland and Denmark, where religious marriages are recognized by the state if civil law conditions are complied with.

In France, by contrast, religious marriages are not recognized and must be preceded by a civil ceremony, under rules dating from the 1804 Napoleonic Code and 1905 Separation Law.

Versions of the same procedure apply in Belgium, Luxembourg and Switzerland, while in Spain and Germany, a legally binding marriage must also be conducted by a state official.

"Civil marriage is the legal norm here, and it's a tradition we can all share in common, whatever our religious beliefs and practices," Renard told CNS on Monday.

"The clarity of knowing the state isn't interested and won't interfere in religious marriages is better than the situation in some countries, where the lack of precise rules can have a negative impact on marriages."

In Poland, a new system of "concordat marriages" was introduced under a 1998 treaty with the Vatican, nine years after the collapse of communist rule. This requires marrying couples to obtain a "no-impediment" notice from the state registry office, which must be completed and returned by the priest within five days of their church wedding, enabling the marriage to be entered in both parish and civil registers.

A similar system -- "matrimonio concordatorio" -- operates in Italy, as well as in predominantly Catholic Slovakia and in Malta, which accepted civil marriages in 1975 and divorces only in 2011 after a referendum.

"The priest acts in effect as a state official, and there's no conflict between civil law and canon law," said Mazurkiewicz, a former secretary-general of the Brussels-based Commission of the Bishops' Conferences of the European Community. "This is a huge change from communist times, when the state tried to control every aspect of life, and Catholic clergy were prosecuted for conducting marriages without a prior civil union."

In Greece, where civil ceremonies were introduced only in 1983, church marriages are recognized by the state, but must be registered at the local registry office within 40 days to be legally valid.

In Russia, however, religious marriages have no civil or legal status and are viewed, as in France, as a purely private church matter.

"Although the Catholic church advises marrying couples to avoid complications by registering their marriages under civil law, we don't have to inform the state when we conduct weddings, since these are private religious events," he said.

Although registered heterosexual marriages are recognized throughout the European Union under a 1978 Hague Convention, this is not the case with same-sex marriages, which were first allowed in 2001 in the Netherlands.

The official Lutheran Church of Denmark permitted same-sex weddings in 2013, with an opt-out provision for objecting pastors, while Lutheran churches in the Netherlands, Sweden and some German states also conduct blessings for same-sex couples.

However, these were banned after a lengthy debate in the Church of England and are rejected in all cases by the Catholic church.

"The Catholic church has only one vision of marriage, as the union of a man and woman, and it's engaged in these debates to make its position clear," Bonaventura said.

"But the decision of some states to change the nature of marriage has caused obvious tension, especially in countries where church and state are separate, but the church is being asked to recognize same-sex unions."

Same-sex issues aside, Renard said he thinks the current system of separate civil and religious marriages is satisfactory, at least in France. He said disputes are rare and most people seem content to cooperate with the existing system.

Mazurkiewicz said he thinks U.S. experts should learn from European practices and leave marriage issues to be resolved at state rather than federal level.

"Each state will have its own way of expressing this interest, based on local traditions and circumstances. Problems usually arise when attempts are made to impose new rules and procedures from above," he said.